Accessibility links
For Senor Blues: A Horace Silver Tribute Silver's soulful, Latin-tinged hard bop tunes implanted themselves into the heads of jazz fans everywhere. So bassist Christian McBride drew together many of Silver's former colleagues and a handful of all-star musicians to salute the great pianist. 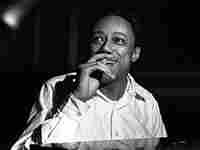 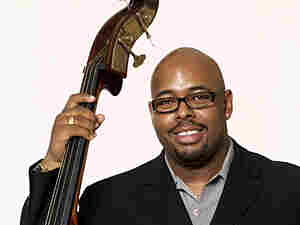 Bassist Christian McBride organized the tribute to Horace Silver, who was in the audience watching. John Abbott hide caption

Bassist Christian McBride is the creative chair for jazz at the Los Angeles Philharmonic –- which means he gets to put together programs at Walt Disney Concert Hall with music he loves. One of the musicians he loves most is jazz pianist and composer Horace Silver.

"Horace Silver's music has always represented what jazz musicians preach but don't necessarily practice, and that's simplicity," McBride says. "It sticks to the memory; it's very singable. It gets in your blood easily; you can comprehend it easily. It's very rooted, very soulful."

In a career that's spanned more than 50 years, Silver has performed with great jazz instrumentalists such as Stan Getz, Lester Young, Miles Davis, and Art Blakey. The pianist was one of the first to combine R&B and gospel with jazz to create a style called hard bop.

But there was one musician that McBride was determined to add to the evening's line-up: drummer Roger Humphries. McBride says he had to track him down.

"Roger Humphries has been such a legendary underworld figure for so many years," McBride says. "I mean, he's one of those kind of guys where he sounded so great on all those Horace Silver records, but he moved back to Pittsburgh over 30 years ago. And, you know, he just stopped traveling. Nobody had really heard from him, except people in Pittsburgh. So it was time for him to make his comeback on the national scene. So Roger came in and just sounded so good, sounded so good –- I was really honored to play with him."

Silver doesn't play anymore, so he watched from the audience, as many of his former colleagues played in his honor.

"I figured that so many of Horace Silver's former musicians are still alive and sounding great, why not put 'em back together again?" McBride says.