Accessibility links
Level of Iranian Support for Ahmadinejad Uncertain Looking ahead to Iran's presidential election in 2009, the big question is what President Mahmoud Ahmadinejad's chances are of re-election. There are no extensive polls in Iran, but recent developments do provide some sense of the public mood. 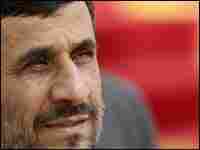 Experts disagree about the level of support President Mahmoud Ahmadinejad has from Iranians — and on his chances of re-election in 2009. Behrouz Mehri/AFP/Getty Images hide caption

Looking ahead to Iran's presidential election in 2009, the big question is what President Mahmoud Ahmadinejad's chances are of re-election.

Because there are not extensive polls in Iran, it's a hard question to solidly answer. But recent developments do provide some sense of the public mood in Iran.

In Iran, politics are never predictable. Back in March, Iran held elections for a new parliament, and the word then was that the conservatives had retained control.

Recently, the new parliament was convened and it turned out that, yes, conservatives are in control — but not the conservatives favored by Ahmadinejad.

"This new parliament is not going to be kind or indulgent to Ahmadinejad," says Karim Sadjadpour, who follows Iranian politics for the Carnegie Endowment for International Peace in Washington.

Debate over Support for Ahmadinejad

Iran's economy is in trouble, facing 20 percent inflation, sluggish growth, and an uncertain job market, despite the windfall in oil revenue that has come Iran's way in recent years. Many conservatives in the new parliament are highly critical of Ahmadinejad's populist economic policies, and they are likely to present a serious challenge in the coming months.

"I think today he is probably the weakest he has ever been," says Abbas Milani, director of Iran studies at Stanford University.

"My reading of the parliamentary election was that it was the beginning of a possible lame duck period for Ahmadinejad," he says. "I think the powers that be have decided that he is too much of a liability and are going to try to ease him out."

Gary Sick, an expert on Iran at Columbia University, says he isn't so sure. He notes that Ahmadinejad has worked hard to build his political base among the poor in the provinces. He is not popular with the educated classes.

"There's no question that Ahmadinejad has lost a lot of credibility with the elite and with the high-level people," Sick says. "He also ran, I think, a terrible campaign for his people. He had a slate of candidates that was very sloppily put together, and they didn't come out looking very good."

That's the way many in Tehran view Ahmadinejad, which helps to explain the very low turnout in the capital in the parliamentary election.

But the view in the provinces is distinctly different, says Sadjadpour.

"Ahmadinejad recognizes that the urban sophisticates in Tehran don't like him," he says. "He doesn't like them. And therefore he's been traveling nonstop to the provinces to appeal to people outside of Tehran for the votes. And it's much more difficult to gauge popular sentiment in Iran outside the capital."

So Ahmadinejad may have accumulated the support and power he needs to win re-election, Sick says.

"He is playing a different kind of game than we have seen in Iranian politics, ever — a very populist politics — and I think it's a mistake to underestimate him," he says.

An investigator named Abbas Palizdar gave a speech late last month in which he accused high-ranking clerics — many are rivals of the president — of corruption.

Said to be connected to the Iranian parliament and judiciary, and possibly to the president himself, Palizdar named names, and accused them of stealing billions of dollars. Ahmadinejad has made charges of corruption part of his standard campaign speech.

"He clearly had access to some of the most sensitive files about corruption in the regime," he says.

The story was reported widely in the Iranian press, instantly becoming the talk of the nation, and overshadowing criticisms of Ahmadinejad, notes Sadjadpour.

Yet as with everything in Iran, the precise meaning of events is not always so clear. These allegations may have gone too far. Palizdar himself has been arrested and charged with corruption, and Ahmadinejad has denied any link to him.

The story, though, is likely to stick, hurting some of Ahmadinejad's potential challengers and benefiting the president himself.