Accessibility links
Denver School Tries Reinvention as Reform Poor achievement and low attendance at Manual High School in Denver led the district to close its doors and open a year later. Closing Denver's oldest high school was not without controversy or protest. But administrators said starting fresh was the only fix. 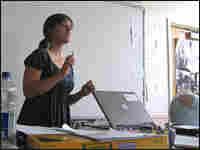 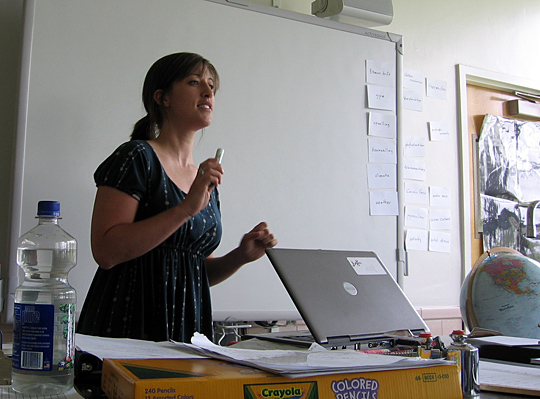 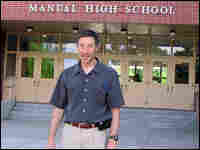 Rob Stein, a Manual High graduate, was tapped to be the principal at the "new" Manual. Stein gave up a position with an area private school to lead Manual. Larry Abramson/NPR hide caption 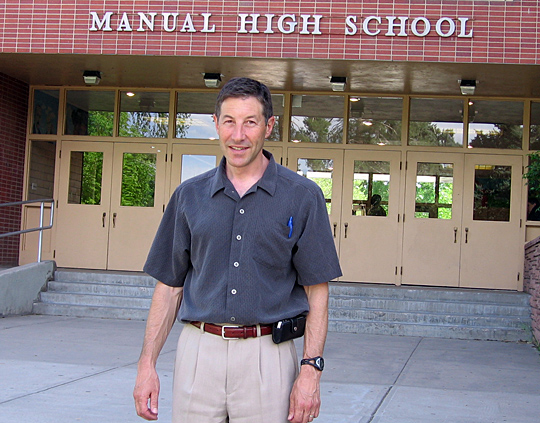 Rob Stein, a Manual High graduate, was tapped to be the principal at the "new" Manual. Stein gave up a position with an area private school to lead Manual.

The experience of Manual High School's rebirth points to some common themes you can see at other innovative high schools around the country.

Starting over is hard; starting fresh is less difficult. Many districts try to create innovative programs within the walls of traditional high schools. It's hard to reinvent education when you're still surrounded by that big, comprehensive school. Some reformers say there's much more promise in brand new schools (even if they live in old buildings).

Small probably is better, even if it's more expensive (and it probably isn't). Many small schools insist they can turn on a dime and change their educational strategies while big schools are like oil tankers and change slowly. Small schools can cultivate a family feel and keep a closer eye on kids likely to fall through the cracks. Big schools do have their high points — diversity of courses, extracurricular sports — but small programs can often piggyback on big schools and, for example, send students to the local high schools for football.

There's a real hunger out there for education that's tailored to the needs of individual kids. With more than a million kids dropping out of the American school system every year, smaller, innovative schools have a huge audience to serve.

Manual High School in Denver has had a roller-coaster history. The city's oldest high school has enjoyed many prosperous and lively periods followed by years when achievement plummeted and families fled the school.

Walk through Manual High today, and there are few signs of the failures that led the school district to temporarily close the school down in 2006.

Today, it looks better than most 50-year-old high school buildings. Inside, teachers have plenty of computers and interactive white boards. The halls are quiet and calm — there are few signs of the tumult this school has been through. But Manual is in transition, and its future is on the line. It has a reputation throughout the city as the school that was so bad, it had to be shuttered. The current mood is optimistic, but it may be hard to return Manual to its former glory.

Talk to people who went to Manual High in the 1980s and they're likely to wax nostalgic.

Local resident Buffy Naake graduated in 1985. She says Manual was a very popular school back then. Its athletic teams, still known as the "Thunderbolts," were known as powerhouses. The school offered a wide selection of courses, a strong faculty and high performance. It was also known for its diverse student body: Court-ordered busing, begun in 1970, ensured that a racial mix of students would attend the inner-city school.

But in 1995, a federal court ended mandated busing. Middle-class white students who had been bused in to achieve a racial mix no longer had to attend Manual. This led to a concentration of poor students. Test scores declined. That led other high-achieving kids to move elsewhere, and a vicious cycle took hold. Attendance plummeted, and the Denver Public School system stepped in to save Manual.

Administrators tried a technique that's been used in countless high schools: They broke it up into separate academies within the school. The idea is to create smaller, more manageable schools, each with a distinct mission.

That didn't work. Neither attendance nor achievement improved.

In retrospect, some people involved with Manual say, the effort to break the school up into academies killed its once-strong identity. And it didn't address the basic lack of leadership.

Achievement got so bad, the school district decided in 2006 to close the school. Parents howled. They accused the administration of racism and fought what they say was the destruction of a neighborhood institution. But administrators were convinced the school needed a fresh start.

Their plan to close Manual for one year would allow its students to move to more successful schools. It would also allow a new Manual staff to start fresh, albeit on a small scale: The first year, there would only be a freshman class. Each year afterward, another class would be added.

The administrators' approach reflects current thinking among many reformers that school culture is often so deep-seated and strong, it's more difficult to cure a sick school than it is to begin anew. Many backers of reform say that alternative schools do much better when they take root in fresh ground, in a truly new school.

Manual began anew in the fall of 2007, with a freshman class of about 150 kids. This September it will add sophomores, then juniors, and then seniors in 2010.

The district picked Rob Stein, a 1977 Manual High graduate, to lead the new school. Stein was intrigued by the offer and decided to give up his position with an area private school. The district promised Stein a lot of flexibility and the ability to choose his own staff.

Stein says he is committed to the effort to save his alma mater, but his comments suggest the district has not always been his best ally. He complains there was no organized effort to recruit students for this first school year. That meant he had to do some retail politicking to find kids.

"I'm driving throughout the neighborhood, and I'll stop a kid and say, 'What grade are you in? Do you have a high school yet?' " he says. "It's silly that there isn't an organized effort to find placements for all those kids." Stein feared that if he hired too many teachers but couldn't recruit enough kids, he'd have to let teachers go.

Teachers often feel they are struggling within someone else's idea of how a school should be run. Here, even the rank and file feel they have a voice in setting rules, standards and expectations.

The kids also know they are part of something special. They say Manual has focused on giving them extra attention. They say they feel close to their teachers.

Student Saul Vasquez says he is on the honor roll despite having earned only D's and C's in eighth grade. "Since the teachers pay attention to us, I actually get my work done," he says.

One, science teacher Lizzy Krueger, offers snacks as a way of keeping students' attention and stays ahead of discipline problems with upbeat good humor.

Early indications are that student performance here is improving. But it will be many months before Rob Stein and his staff get any solid data on how kids are doing on standardized tests, the only information that really matters in this age of No Child Left Behind. By then, Manual will face the challenge of doubling in size. The staff of this school will probably continue to feel they are reinventing their school every single day they come to work.