Accessibility links
Weaning Colombian Farmers Off Coca Growing The country's government is trying to help former coca farmers to develop legal businesses. People who once grew coca are now selling coffee, honey and cocoa, and running eco-lodges. But a report released this month shows that coca is still king in much of Colombia. 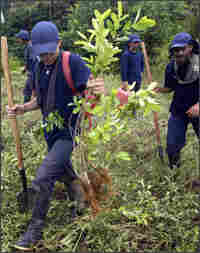 Workers in Colombia pull up coca plants near the border with Ecuador as part of an eradication program. Colombia is the world's biggest producer of cocaine. Carlos Julio Martinez/AFP/Getty Images hide caption

Cocaine can be a tough habit to break — not just for the users, but also the coca growers.

On the Sierra Nevada de Santa Marta mountain range, people who once grew coca are now selling coffee, honey and cocoa, and running eco-lodges. But a report released this month shows that coca is still king in much of Colombia.

Drugs in the Sierra

The Sierra is rugged and close to the Caribbean, so it's a haven for wildlife — and dope growers. In the 1970s, it was famous for the marijuana called Santa Marta Gold. More recently, it's been home to lots of coca fields, and the finished cocaine has been smuggled out of nearby ports.

But an eco-lodge near a national park on the coast suggests that change is possible in the Sierra.

On one particular day, Richard Velasquez, an innkeeper at the lodge Posadas San Rafael, welcomes half a dozen guests.

"Before, we were eradicating coffee plants to plant coca," Velasquez says. "Now we are renovating the coffee plantations, and we can serve you organic coffee made with our own hands. And we have this eco-tourism lodge on the Sierra Nevada."

Encouraging a Shift from Coca

Velasquez is part of a program known as Guardabosques, or Forest Warden Families. It's a project of Colombia's Social Action agency and the United Nations Office on Drugs and Crime. The program offers about $100 a month for 18 months to families that pull up their coca plants and draft plans for legal ventures.

"The problem is if you only use a forced strategy, people will continue to grow every time in farther and farther places, cutting down more forest," Echeverri says. "So if you give them a productive alternative that is viable and sustainable, you substitute not only the crop but the source of income, you try to give them a sustainable livelihood on those terms."

Other Forest Warden Families on the Sierra are selling coffee, chocolate and honey, and thousands more are doing the same elsewhere in Colombia.

You can see the extent of the projects at the Tienda Cafe de la Paz, a store and cafe in Bogota. It's on the first floor of an office building confiscated from a narco-trafficker, and the shelves feature products from all corners of the country.

Olga Lucia Rivera, who manages the store for the U.N. Office on Drugs and Crime, shows off some items from the Department of Antioquia, where coca is a big problem. It's an impressive display, but despite all of these projects there's still plenty of cocaine to go around.

Colombia produces more cocaine than any other country. The United States uses more cocaine than any other country, and nearly all of it — around 600 tons annually — comes from Colombia. The U.S. government's multibillion-dollar Plan Colombia is focused on eradicating coca plants, mostly by spraying herbicides from planes. But this year, Congress doubled the alternative development portion of the plan, to $120 million.

Back on the Sierra, Velasquez says business is good at the eco-lodge, where hummingbirds visit flowers along trails between thatched-roof cabins, and ripe mangos hang from the trees.

"We've had a very nice change of lifestyle, because we've gone from illegal work to legal work, and now we have peace in our hearts," he says.

It's a slow transition, farmer by farmer, and the odds are long. A new United Nations report shows that the number of acres of coca fields actually increased last year, and the total area is now about the same as it was a decade ago.