Accessibility links
Imagining the Pentagon Under a New President The next president will be the first in 40 years to inherit the Pentagon during wartime. While the two candidates' foreign policy advisers both advocate greater accountability at the Pentagon, they disagree on how to handle Iraq.

Listen
Imagining the Pentagon Under a New President

Danzig on the surge in Iraq

Danzig on the Pentagon under Democratic leadership

Danzig on training the Iraq military

Armitage on military bases in Iraq 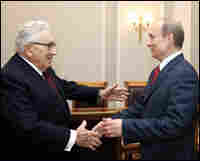 The next president will be the first in 40 years to inherit the Pentagon during wartime, along with tough decisions on both the Iraq war and spending on big-ticket items such as ships and aircraft.

NPR sat down with two men who could become the next secretary of defense: Richard Armitage, a McCain adviser and former deputy secretary of state, and Richard Danzig, an Obama aide and former Navy secretary under President Clinton.

If these two advisers can find common ground, it is that they both agree that Defense Secretary Robert Gates has done a good job. They would both like to pick up where Gates left off.

If Armitage were secretary of defense, he says he would continue what Gates started. "It's about time we got accountability across government, particularly in the Pentagon," he says.

The other possible secretary of defense, Danzig, says that in recent years, the government has really had "two Pentagons: one, Secretary Rumsfeld and one, Secretary Gates."

Danzig says that Rumsfeld's Pentagon didn't always listen to the military brass, especially when they said they needed more troops in Iraq. "Secretary Gates has moved it, to some degree, back towards a more consultative organization, where there's more respect for military opinion," he said. "I think an Obama administration would go even further."

Iraq separates the candidates more than any other subject. Obama wants to remove one or two American brigades each month, so all combat troops would be out a year and a half into his term.

Danzig says reducing U.S. troops would spur Iraqis to finally settle their political differences: "Our desire is that would be a catalyst for the Iraqis that would cause them then to respond."

Armitage argues that pulling out American troops too quickly could have the opposite effect — "every man for himself," as Armitage puts it, leading to more sectarian violence. "Sen. McCain has never found the celestial calendar to be a good way to determine whether one ought to draw down or not. The situation on the ground is the way you determine it," he says.

McCain says the Iraqi troops are coming along in their training, and Armitage says American commanders will soon determine whether more U.S. combat troops can come home. "At the end of the day, it's more important how we leave Iraq than how we entered," he says.

Even if a President Obama were to withdraw combat troops from Iraq, Armitage says, "some" American solders will have to remain to protect diplomats, train Iraqis and go after al-Qaida in Iraq.

Danzig says that "you could expect that there'd be tens of thousands of U.S. troops still remaining after you withdrew combat brigades," with anywhere from 30,000 to 55,000 troops remaining.

Numbers are what a McCain Pentagon would focus on, or at least the number of dollars. For years, McCain has complained about bloated Pentagon weapons budgets.

He raised that issue earlier this month. "I have worked with the president to keep our nation safe," he said. "But he and I have not seen eye to eye on many issues. We've disagreed over the conduct of the war in Iraq, over defense spending that favored defense contractors over the public good."

And what would this mean for a McCain Pentagon? Armitage says, "We'd look for swifter decisions, particularly on decisions to forgo certain weapons systems."

Danzig agrees that hard choices and deep Pentagon cuts will be necessary in the next administration. "In my opinion, the budget is unrealistic in its projection of costs and gains," he says. "It anticipates the delivery of ships or the achievement of personnel goals without really paying for them fully. That has to be dealt with."

Biographies of Danzig and Armitage

The two advisers couldn't be more different in substance and style.

Armitage is a blunt bear of a man with a shaved head: a Vietnam combat veteran who lifts weights and runs an international consulting company. Armitage and McCain share a bond of military service and an earthy cadence about America's fighting prowess.

"At the end of the day, notwithstanding high-tech weapons systems, it's only an infantryman with a bayonet who can take and hold ground and bend an enemy to our will," Armitage says.

Danzig, by contrast, is a lanky Rhodes scholar with the thoughtful nature of an Oxford don. He practiced international law and has spent the past several years studying terrorism, even interviewing members of the Japanese cult Aum Shinrikyo in prison. He talks in a living room crammed with books, including the poetry of E.E. Cummings and the works of Charles Dickens and Joseph Conrad.

Danzig wants more American soldiers to learn foreign languages and know about cultures. He remembers a conversation in Afghanistan, where an American officer said he'd give up a company of soldiers for an agricultural expert. According to the Obama campaign, in recent years, national security has become too militarized — including American aid and diplomacy.

"The real commander-in-chief threshold doesn't have to do with years tallied up in Washington; it has to do with the judgment and vision that you will bring to the Oval Office," Obama has said in the past.