Accessibility links
Amplifying Safety in Hybrid Cars The relative silence of hybrid cars poses safety concerns for visually impaired pedestrians who rely on sound cues from oncoming traffic. Two Stanford graduates have developed a system that broadcasts specific sounds based on what the car is doing. 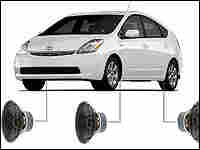 A diagram showing the external speakers that would be placed on the wheel wells of hybrid vehicles like this Toyota Prius. Enhanced Vehicle Acoustics Inc. hide caption 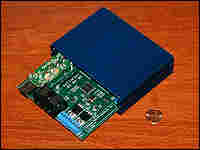 Hybrid vehicles are touted for their environmental benefits and, given the spiraling price of gasoline, their economic benefits. But for visually impaired pedestrians, who rely on sound cues from oncoming traffic, the relative silence of hybrid engines poses serious safety concerns.

Stanford graduates Bryan Bai and Everett Meyer have developed a technology to make hybrid cars sound more like, well, cars. Their system uses miniature, all-weather audio speakers that are placed on the wheel wells and broadcasts specific sounds based on what the car is doing.

"It sounds essentially like a vehicle, except the sounds are more intelligently projected," says Meyer, who along with Bai co-founded Enhanced Vehicle Acoustics Inc. in Santa Clara, Calif.

"If a person is in drive mode and moving forward, the sounds are only projected in the forward direction," he tells guest host Guy Raz. "If the driver decides to turn left or right, the sound changes on the left or right appropriately. So it minimizes noise pollution and maximizes acoustic information for pedestrians."

Hybrids like the Toyota Prius can become eerily silent when driven at speeds less than 25 mph or, say, when idling at a stoplight. At these low speeds and in stop-and-go traffic, the vehicles switch from traditional combustion engines to electric power. This boosts fuel efficiency — but it also increases the risk for pedestrians.

The system created by Bai and Everett's company, which was formed with the help of a grant from the National Federation of the Blind, emits sound when the cars go into silent mode.

The federal government and a handful of states are considering legislation to set minimum sound levels for hybrid cars. In April, Reps. Edolphus Towns (D-NY) and Cliff Stearns (R-FL) introduced the Pedestrian Safety Enhancement Act of 2008. The bill proposes a two-year study to determine the best strategy for tackling safety concerns about hybrids among the visually impaired.

Everett acknowledges that his company's devices could be viewed as adding to the noise pollution of traffic. But, he notes, "there's a different between noise and sound, and we view our system as producing sounds which have a purpose."