Accessibility links
FBI Sweep Reveals New Twists to Mortgage Fraud The FBI has arrested more than 400 people in a sweep that's revealed a broad array of alleged mortgage scams across the country. Some alleged schemes involved real-estate twists on identity theft; others preyed on those facing foreclosure. 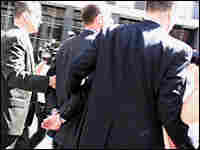 The Justice Department appears to have officially opened the penalty phase of the mortgage debacle in this country.

The arrests came as part of the FBI's sweeping Operation Malicious Mortgage. In this phase alone, FBI officials said they arrested more than 400 real estate agents, brokers, appraisers and developers. People from just about every aspect of a real estate transaction ended up in the FBI's cross hairs.

The 406 people arrested between March 1 and June 18 included everyone from alleged straw buyers — who allow scammers to use their names and credit histories on mortgage applications — to run-of-the-mill real estate agents, mortgage brokers, appraisers and developers.

While the word "mortgage" appears in some form on all these sketchy transactions, FBI officials said that mortgage fraud was just like any kind of bank fraud: People are after money and have thought of ingenious ways to get it.

Recently, for example, officials have started arresting people for scams tied to home equity lines of credit. It is identity theft with a real estate twist.

Instead of stealing an identity to secure a credit card, scammers have been zeroing in on people they think have a lot of equity in their homes. They steal their identities, then go online and get a home equity line of credit on that person's house and take the money. The FBI said the possibilities seem to be endless, and even in a down market, there are many opportunities for scam artists.

Many of the recent arrests have been related to something called a Foreclosure Rescue Scam. The schemers prey upon people who are about be foreclosed on. They promise the homeowners that they can live in their houses mortgage-free, and then buy their houses back after a year if they just sign a few papers. What their victims don't know is that the scammers work with straw buyers to take out a bigger mortgage that essentially cashes out any equity in the house. In many instances, the homeowners end up losing their homes anyway.

These kinds of scams involve plenty of players: from bogus mortgage brokers to appraisers who are on the take. Even lawyers may be in on the scam, encouraging people to sign the papers, misrepresenting what the papers actually say. Those are the types of people arrested under Operation Malicious Mortgage.

The operation was a massive one. The FBI said more than 80 percent of their offices were involved. In all, more than 406 defendants were charged. A little less than half of those have been convicted so far, and more than 80 of them are already serving sentences.

The FBI conducted a similar operation — Quick Flip — two years ago. Many of the people arrested under that operation were appraisers on the take: They were inflating their assessments of property values, so that phony buyers could make a fast buck by flipping houses in a then-hot market.

It is no coincidence that the arrest and indictment of two Wall Street executives — hedge fund managers Ralph Cioffi and Matthew Tannin — came on the same day that the FBI announced the results of Operation Malicious Mortgage.

The FBI is sending a specific message: If you are involved with mortgage fraud — whether on Wall Street with high-level investors, or on Main Street with ordinary homeowners — the bureau intends to catch and prosecute you.

Bryant Park Project Video: Is the white-collar perp walk back?