Accessibility links
The Sound Of Summertime In Six Notes It's an extraordinarily simple song from a work initially met with indifference. But with summer now at full tilt, George Gershwin's enduring ode to the season is again in the air wherever the living is easy.

The Sound Of Summertime In Six Notes

The Sound Of Summertime In Six Notes

Three takes on a Gershwin standard:

Summertime (from Porgy and Bess, opera)

It's summer. And George Gershwin's song "Summertime," from Porgy and Bess, is in the air again. 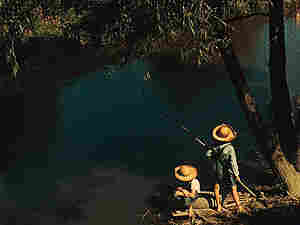 The atmosphere of summertime is conjured up right away by its introduction. The funny thing is, though, that the atmosphere just keeps changing. It depends on if it's summertime in the 1930s off the Carolina coast, where Gershwin wrote the song, or summertime in Woodstock, N.Y., where Janis Joplin sang it in 1969.

Or anywhere else, it turns out, which is absolutely everywhere. The song says summer, and the magic of it is that it says so many different summers -- the hot, urban summer or the lazy, rural summer -- depending on who's doing it. And it says summer both with the lyrics, which are by DuBose Hayward, or without them.

At last count, there were more than 130 commercially recorded versions of "Summertime," from Jascha Heifetz to Miles Davis. And thanks to a few recent reissues, you can explore "Summertime" from every conceivable artist, era and genre.

"Summertime" consists of only six notes; that's part of its mystery. If you're playing it in the key of A minor, it uses just E, C, D, B, G and A. So it's an incredibly simple melody -- but is there anything remotely like it?

Gershwin set out to do something with Porgy and Bess. He said he wanted to invent a new style of opera that would cross musical lines. Porgy and Bess, as an opera, received mixed reviews in the 1930s, ran for 124 performances -- not even enough to make up its original investment -- and has remained somewhat controversial, even through a film version and several revivals.

About "Summertime," however, there is no controversy. How many songs cross over so easily? How many six-note melodies have appealed so universally to musicians as a means of self-expression? With this one song, Gershwin did it: He put music above categories or artificial distinction of any kind.

It's a wild thing to have done with six notes.