Accessibility links
Chinese Automaker Brings MG Back to Life China's potential as a global automaker will be tested as it revives the legendary British brand MG. A Chinese company bought MG's assets two years ago, shipping the manufacturing equipment to Nanjing. Wednesday, the first two MG models roll off the reassembled production line.

China's potential as a global automaker will be tested as it revives the legendary British brand MG. A Chinese company bought MG's assets two years ago, shipping the manufacturing equipment to Nanjing. Wednesday, the first two MG models roll off the reassembled production line. 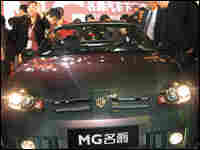 The launch of the first Chinese sports car coincided with the 16th anniversary of Nanjing Auto, China's oldest carmaker. But Nanjing Auto is unable to say exactly when this car will hit the Chinese market, or exactly what it will cost. Louisa Lim, NPR hide caption 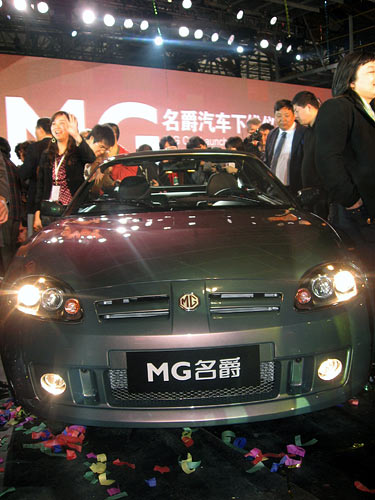 The launch of the first Chinese sports car coincided with the 16th anniversary of Nanjing Auto, China's oldest carmaker. But Nanjing Auto is unable to say exactly when this car will hit the Chinese market, or exactly what it will cost.

And here's a quick quiz for car enthusiasts, see if you can name this car: Prince Charles used to drive one, as did his father, Prince Philip; Chevy Chase drove one into a lake and off of a cliff in the movies; even Jackie Chan chased the bad guys in a red one in "Supercop." What is this car? The MG, the legendary British sports car which has now been resuscitated as a Chinese brand. Now see if you can guess which NPR correspondent watched the first Chinese MG's rolling off the production line. The answer will be at the end.

LOUISA LIM: Robots weld car doors on an assembly line. Just a year ago, however, this was just empty field. Now it's an entire car-making plant. Ten thousand tons of equipment, brought along with the struggling MG Rover Grand. The assembly line was taken apart in Longbridge, Birmingham, England, shipped 6,000 miles across the world and reassembled in Nanjing, China. Bob Svenson(ph), a 20-year veteran of Longbridge, is still gasping in awe.

Mr. BOB SVENSON (MG Employee): The whole building is new. The whole complex wasn't here 12 months ago. All the plants come from the U.K. And has been built, commissioned and now is running, and we're producing cars off the end of the line.

LIM: Has the speed at which it's happened surprised you?

LIM: Could that sort of thing happen in England or in Europe?

Mr. STENSON: No, I don't think anywhere else in the world.

LIM: This example underlines China's determination to become an auto giant. In fact, figures from the Bank of America show last year China overtook the U.S. as the world's biggest car manufacturer. The fact is Nanjing Automobile Corporation, the company that bought MG for $100 million, wasn't even among China's top 10 carmakers.

Jerry Huang(ph), from auto consultancy CSM, says this strategy of buying a failing global brand shows the impatience and ambition of China's carmakers.

Mr. JERRY HUANG (CSM): They just want to save time, because it would take a long time to build a good brand image or to promote your brand all over the world. So if you acquire a famous international brand, it would save time for these Chinese carmakers to expand their business internationally.

LIM: But can it work? As the first Chinese MG's drive off the assembly line through clouds of dry ice there's fanfare. But privately the bosses admit Nanjing Auto is seeking more cash, taking out government loans of hundreds of millions of dollars to fund their expansion plans. And there were more revelations, an MG plant had been planned for Oklahoma, the first Chinese car factory on American soil.

But there's been acrimony with the American joint-venture partner and Nanjing Auto's Paul Stowe says that dream is now dead.

Mr. PAUL STOWE (Nanjing Automobile Corporation): To my understanding, there is no more plans for the Oklahoma plant. We are also discussing possible ventures in China - in America, sorry, in the future but I don't believe there's anything on the table at the moment with Oklahoma.

LIM: Company president Yu Jianwei says corporation might now take other forms such as co-branding or technological cooperation. And he believes Chinese companies don't yet pose a serious threat to American carmakers at home.

Mr. YU JIANWEI (President, Nanjing Automobile Corporation): (Through translator) Chinese carmakers have a lot of difficulties entering the American market; regarding their understanding of the American market, and of American laws on safety and environmental regulations. We've still got a long way to go.

LIM: For now, Nanjing Auto is largely focusing on China, where car sales were up 30 percent last year, the second largest car market in the world after the U.S. And for all their protestations, government-owned companies like Nanjing Auto have deep pockets and big ambitions as they market the MG as the car that makes your heart beat faster.

LIM: The launch boast is this. Japanese car companies took 30 years to make it internationally. South Korea took 20 years. The message is unmistakable. Watch out, China's automakers are coming and faster than you know.