Swedish jazz pianist Esbjorn Svensson died last week in a scuba diving accident. He was 44 years old. His trio, known as E.S.T., had a large following in Europe. Svensson's music combined elements of hip hop, funk and rock. He was often called the European Keith Jarrett.

This is the music of Swedish jazz pianist Esbjorn Svennson. He died last week at the age of 44 in a scuba diving accident. His experimental jazz outfit, the Esbjorn Svennson Trio or EST had a wide following in Europe. Svennson himself was often called the European Keith Jarrett. He wasn't a purist when it came to jazz. Svennson borrowed from hip-hop, and funk, and rock music.

He and his band mates would sometimes feed their instruments through different machines to warp the effect and make the music sound like something a traditional jazz trio could never produce.

RAZ: Svennson would even reach into the bowels of his piano to pluck the strings.

Mr. SVENNSON: There's a lot of interesting thing actually going on in Europe and we don't have the tradition like you have here with your own folk music. We don't have to take care about it in that sense. So we can experiment more maybe and add some rock and roll, add some classical music, whatever we want, to add some new sound.

RAZ: Jazz critic Ian Patterson writes that Svennson's death brought down the curtain upon one of the most brilliant piano trios to enliven the modern jazz panorama, unsettled the jazz police, and to attract all comers. Pianist Esbjorn Svennson was 44 years old. Just before his death, he and his band finished recording their 12th album. It's due out this September. We leave you now with his 2002 composition, "Bound for the Beauty of the South."

(Soundbite of "Bound for the Beauty of the South")

In Association with Radio Netherlands

Ploctones in Concert on JazzSet 2007 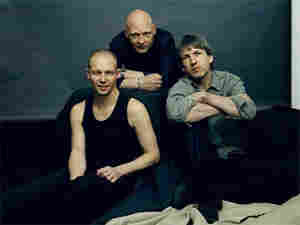 Esbjorn Svensson — the leader, composer, and pianist of Swedish trio E.S.T. — died in a scuba-diving accident near Stockholm on June 16, 2008. He was 44. Svensson is survived by his wife and two children.

Svensson pushed the boundaries of jazz with his trio by incorporating elements of funk, classical, and electronica with his trio. It not only appealed to traditional jazz fans, but also reached out to a younger generation raised on rock. In his memory, JazzSet presents a concert recorded at the 2007 North Sea Jazz Festival.

One of the biggest music events in the world, the North Sea Jazz Festival takes place every July at the Ahoy Center in Rotterdam, the Netherlands. The Ahoy Center is a massive modern sports complex, with so many venues and arenas that one person could never get to even half the music.

Though many bands come from the U.S. to North Sea, the opportunity for JazzSet was to check out bands from Europe. We begin with the Ploctones from the Netherlands, and then rush over to another stage to catch the acclaimed Swedish trio E.S.T.

In 2001, guitarist Anton Goudsmit organized a band to perform music commissioned by Dutch national radio. The group he formed is the Ploctones: Goudsmit with Efraim Trujillo on saxophones, Jeroen Vierdag on bass, and Martijn Vink on drums. Goudsmit is a mover and a dancer onstage, while Trujillo is California-born, living in Amsterdam since 1980. Vierdag's versatility encompasses Latin and Brazilian music, while Vink is the drummer of the well-known Metropole Orchestra. The emcee at North Sea hails them for their "grooves and improvs."

Next, a few yards outside of the Ahoy Center, there's an outdoor tent with the sides rolled up to catch a breeze. It's stuffy because people keep piling in to see and hear the Swedish trio that Pat Metheny champions — and that k.d. lang hired to open a recent North American tour. After 15 years together, E.S.T. is as one: "Three minds and hearts beating together in the moment," writes a BBC reviewer.

Virtuosic on piano, bass, and drums, and as singleminded as a chamber group, E.S.T. is more than jazz and classical music. Its members bring laptops to the stage, adding textures, processing, and selectively applying distortion.

They are Esbjorn Svensson on piano, his childhood friend Magnus Ostrom on drums, and bassist Dan Berglund.