Accessibility links
Inside Access: Photographer Captures the Taboo Photographer Anthony Karen gains the trust of groups known for their secrecy: the KKK, neo-Nazis, Voodoo practitioners. Karen has captured cross-burning Klan initiations and bloody Voodoo rituals in Haiti on film. He discusses how he gets close to secretive and controversial subjects.

Discuss: What do you think of Anthony Karen's photographs? 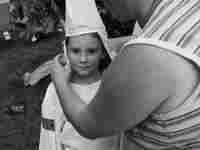 A young Klan member gets fitted for her hood. Anthony Karen hide caption 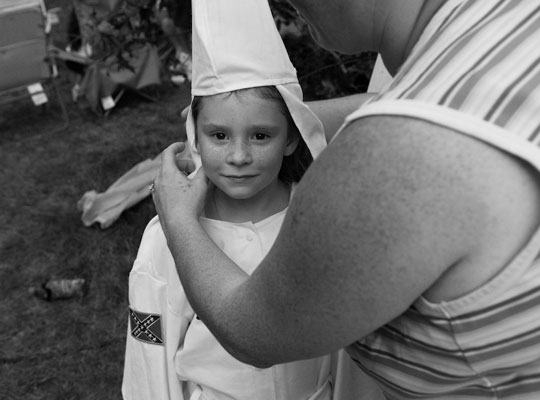 A young Klan member gets fitted for her hood. 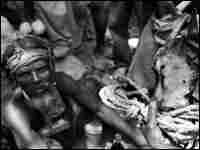 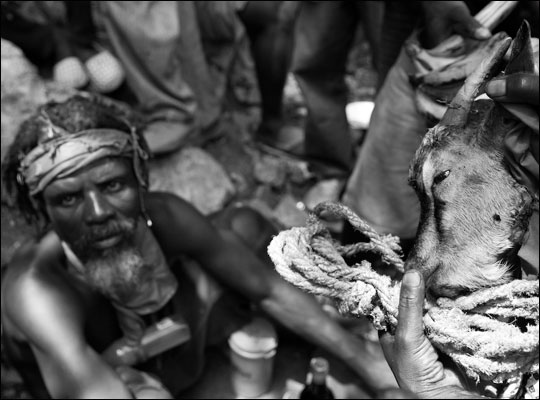 A Voodoo priest prepares a sacrifice.

From body-writhing Voodoo rituals in Haiti, to white-robed Ku Klux Klan initiations in the backwoods of the South, photographer Anthony Karen has gained access to some of the most notorious and mysterious subcultures in the world.

"I've always had an adventurous side of me, " Karen says. "I kind of like what happens behind the closed door. I'm kind of intrigued about things you're not supposed to see or experience."

He captures intimate images of taboo people doing taboo things — swastika-clad families at the annual Nordic Fest gathering of white nationalists, Haitian Voodoo priests beheading goats and, even "Brother Number 3," a former official in the brutal Khmer Rouge regime hiding out in Cambodia before his 2007 arrest. Karen has made a career out of breaking into such secret circles.

"I've been doing this for years. You have no idea how long it takes to get in these organizations," Karen says.

The key to getting access, he says, is suspending judgment and engaging people on a basic level.

"Honesty is a big part of it. I engage in conversation with people. I care about people; I want to hear what they have to say," Karen says. "I actually spend time and talk to people. I want to learn about them; I'm curious what's going on in their lives and what brought them to their beliefs."

But it isn't always easy to balance being a privileged outsider with being an unbiased journalist. Neo-Nazi groups have tried to recruit him, for example. "I've been asked to join a few times, of course. I'm big, I'm white," Karen says. "I'm like, 'No, it's not my thing. I'm a photographer, but thank you.' "

Karen says he has met all kinds of people in his work, some good and some bad. But regardless of his subjects' beliefs or actions, he says his photographs aren't meant to offer commentary. "I'm not unaware of the tragic histories and past and pain of these organizations, but I'm there to take photographs."