Accessibility links
Eef Barzelay: A Blueprint For Finding Love The former Clem Snide singer always mixed wryness with unmistakable warmth. In "The Girls Don't Care," he needles those for whom expressions of love run counter to a painstakingly maintained ironic distance. 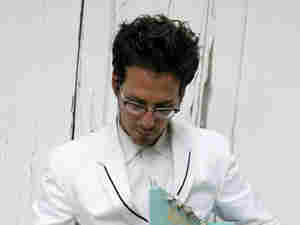 As leader of the now-defunct Clem Snide, Eef Barzelay took flak from critics for weaving smart-alecky wordplay and pop-culture references into his keenly observational songs. But then, with the release of 2003's Soft Spot — a concept album about the unconditional love and sacrifice inherent in marriage and parenthood — he took yet more flak for singing straightforwardly sincere love songs.

Truth be told, Barzelay's work has always mixed wryness with unmistakable warmth, and he's never gotten enough credit for both the subtlety of the former and the sincerity of the latter. Ever since Soft Spot, and starting with the title track to 2005's End of Love, he's taken to occasionally needling those for whom expressions of love run counter to a painstakingly maintained ironic distance. "You're so sophisticated / Your mind's been liberated / You're the first to notice when a movement's come and gone," he sang in "End of Love," concluding, "No one will survive the end of love."

Since then, Barzelay has released a solo acoustic record (2006's Bitter Honey), recorded Clem Snide's swan song (the still-unreleased Hungry Bird), and made Lose Big, a smart and compact collection of rock 'n' roll conversation-starters. "The Girls Don't Care" in particular functions as an ideal sequel to "End of Love," as Barzelay gently advises against hipper-than-thou posturing: "The girls don't care that you ache to be free," he sings. "The girls just want a sweet melody."

Barzelay has never been afraid to turn a pop song into a mission statement: For proof, check out Clem Snide's masterful "I Love the Unknown," which Barzelay helpfully tacks on as a bonus track to Lose Big. In "The Girls Don't Care," he lays out a bona fide blueprint for how to find love: "Don't listen to Frank Zappa / play Coltrane, Faust, or Can / Just take that twisted heart of yours and lay it in her hand."