Accessibility links
After Long Exile, Afghan Returns to Aid U.S. Marines At age 53, Abdul Torabi has returned to Afghanistan, his home country. After almost 30 years away, he's helping the U.S. Marines as an interpreter. He says the work allows him to help two countries he loves: America and Afghanistan. 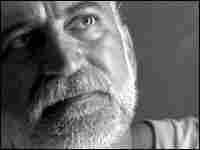 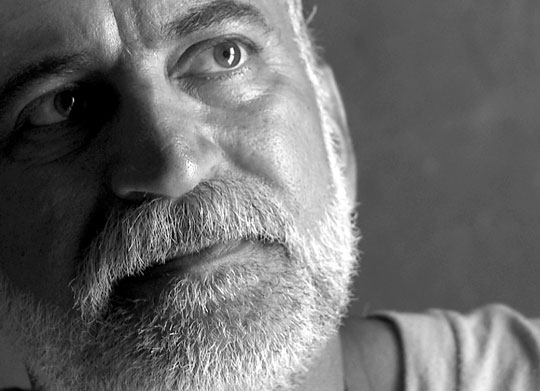 Interpreter Abdul Torabi was born in Afghanistan, but left during the 1979 Soviet invasion. He now lives with his family in San Francisco. 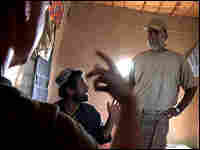 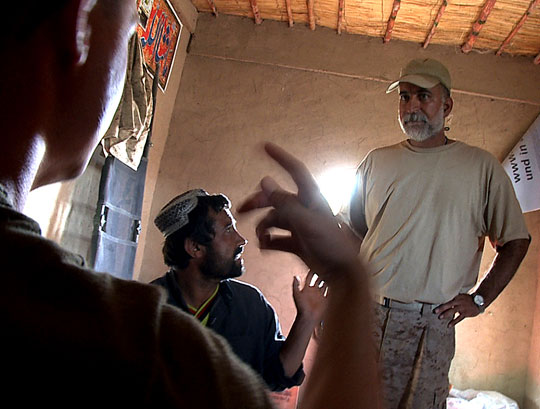 Torabi acts as a liaison between the U.S. Marines and Afghans in the Taliban stronghold of Garmsir, a district in Helmand Province.

At 53, Abdul Torabi is a soft-spoken man with gray hair, a short gray beard and a quiet chuckle. He was born in Afghanistan, but has lived most of his life in exile in America.

He is now in Afghanistan again, working as a Marine interpreter, or "terp."

This is his first time back to his home country since 1979, when he fled the Soviet invasion. He was forced to flee Afghanistan to protect himself and his family, after he participated in student protests against the Soviet occupation of his country.

"I'm happy because I know I can make [a difference]," he says. "I can be help for two country I love: America and Afghanistan."

In both Iraq and Afghanistan, the U.S. military relies on thousands of interpreters. They play a vital role, helping U.S. troops communicate with local communities.

Last month, Torabi accompanied the Marines when they invaded the Taliban stronghold of Garmsir, a district in Helmand Province.

He is by far the oldest of a handful of Afghan interpreters in Garmsir now who live, eat and work alongside the Marines in primitive and often dangerous conditions.

Lt. Micah Steinpfad relies on Torabi to translate during a meeting with the police chief of Garmsir.

"Have you heard anything about the Taliban in our area specifically?" Steinpfad asks the police chief, through Torabi.

After a brief exchange in Pashto, Torabi informs Steinpfad that the officer has heard about Taliban activity in several nearby villages.

Interpreters like Torabi provide much more than linguistic services.

Torabi was on hand to help when jumpy Marines mistakenly fired a bullet at the car of an off-duty Afghan policeman who was trying to deliver a generator to their camp.

"He said, 'I'll do anything I can for you guys, anything you need. I'm here for you guys,' " Torabi translates, as the frightened policeman, named Mohammed Daoud, hands bags of bread and vegetables to the Marines.

"We appreciate it," says First Lt. Steve Bechtel. "We're going to help you out and try to get this windshield replaced for you."

For Torabi, this mission is also an intense personal experience. This is his first time back to Afghanistan in almost 30 years.

"I'm surprised what I'm seeing. And this is sad, too," Torabi says, because of all the problems facing Afghans, and "the way the country been destroyed" by wars.

It was the presence of another foreign force that compelled Torabi to leave in 1979. But he says the American soldiers are much different from the Soviet soldiers he fled.

When the Russians came, he says, they didn't care if Afghans were happy or unhappy. "They do what they wanna do," Torabi says. But the Americans, he says, "want to help people."

Torabi was a young man when he fled Afghanistan. He never got to see his mother again. She died in Kabul while he was in exile. When this assignment in Garmsir is over, he hopes to reunite with his brother and sister in Kabul. And one day he wants to bring his American family to visit the land of his birth.

He wants his children to see Afghanistan, he says, "so they understand better the life and appreciate what they have back home."

But first, Torabi is looking forward to returning to the U.S. He is eager for the day when he can barbeque with his family and enjoy the San Francisco weather.

"I like to barbeque some good steak, and my wife's making very good burritos. I miss those burritos," Torabi says, adding, "Of course without cold beer, nothing tastes good."

Trip Illuminates Life on Bases Across Afghan Desert June 12, 2008
A Journey on the Treacherous Road to Kabul June 1, 2008
Suicide Bomber in Afghanistan Kills U.S. Marine May 31, 2008
Interpreter Prepares for Return to Iraq May 13, 2008