Accessibility links
U.S. Looks to Ease Barriers in Baghdad Market Many parts of Baghdad are enjoying relative calm. But the price of improved security is concrete walls, checkpoints and armed guards. In one formerly violent Baghdad market, the U.S. military is experimenting with ways to open up the walls so that merchants can flourish. 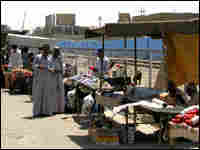 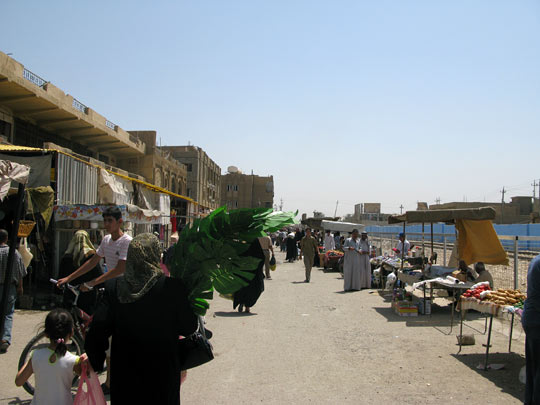 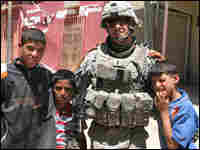 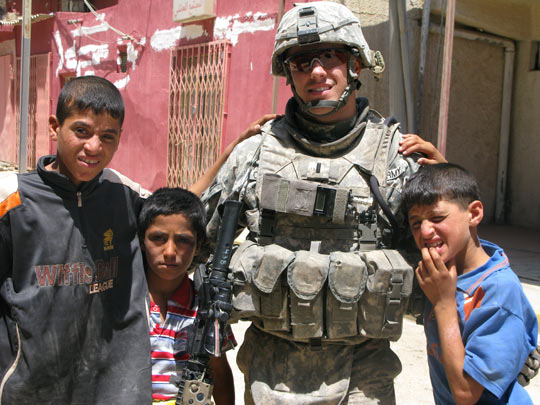 U.S. Army 1st Lt. Justin Chabalko and his mortar platoon have acquired a following of street kids from the Doura market.

Many parts of Baghdad are enjoying a period of relative calm after years of terrorist attacks and sectarian violence. But the price of improved security is that life for many Iraqis is now circumscribed by concrete walls, checkpoints and armed guards.

The security measures limit people's movement and hamper the economic revival that U.S. officials hope will finally bring stability. In one formerly violent Baghdad neighborhood, the U.S. military is experimenting with ways to open up the walls.

In Doura market, the economic centerpiece of a mostly Sunni Arab neighborhood in southern Baghdad, business is brisk. Vendors hawk items including white potatoes at about 30 cents a kilo (roughly 2 pounds), and okra whose quality is said to be like gold.

Omar Hussein, a produce merchant whose conversation is constantly interrupted by transactions with customers, says he'd like to expand his business, but the tight security is holding him back.

"I can't develop because of the security situation," Hussein says. "The market closes early now, and these concrete walls are hurting us, too."

Behind Hussein's stall, the cross streets are blocked off by 14-foot-high concrete barriers put in by the U.S. Army. Neighborhood customers have to go a long way around to get to the market, he says.

As Hussein speaks, a U.S. Army foot patrol moves through the market, followed by Humvees and towering armored trucks. Aside from children, no one pays them much attention.

That's fine with 1st Lt. Justin Chabalko, the platoon leader who heads this patrol. The unit that preceded Chabalko's 2nd Battalion, 4th Infantry Regiment had to fight hard to take this neighborhood back from al-Qaida insurgents.

Today Chabalko is more occupied with day-to-day security matters, like a meeting with a local Sons of Iraq leader to discuss security at a bank. The Sons of Iraq is the U.S. military's name for local watch groups that are paid and trained by the U.S. Army.

Chabalko says the bank — one of three that have opened in Doura in recent months — seems to be doing well. But the security cameras don't work when the power is off, he says, a frequent occurrence in Baghdad. Chabalko tells the Sons of Iraq leader, Ibrahim Hamdaan, that he'll try to get fuel for a generator so the bank's security cameras will work 24 hours a day.

In Doura, the Sons of Iraq are Sunnis, recruited from the local population. Part of Chabalko's job is to see to it that they work well with the national police, who are mostly Shiite, once regarded with deep hostility by the locals.

The soldiers' day is made up of incidents that are more like police work than war fighting. So Chabalko's unit is eager to get Iraqi police trained to take over the job.

A Mixed Bag at the Market

Hamad Dawod, a merchant at the Doura market, says security is improving "because the relationships are getting better among the people, the police, the Iraqi Army and the U.S. Army."

But Dawod says he is also hampered by the security walls.

"I'm not asking to open all the roads, but they should open at least one way for pedestrians, or maybe entrances so cars can bring in the groceries and goods we sell," he says.

Lt Col. Tim Watson, the commander of the 2nd Battalion, 4th Infantry Regiment, says there are plans to do just that.

On the other side of the blast wall that surrounds Doura market, there's clearly some confidence that the Americans' plan will take shape soon. Restaurant and shop owners are cleaning and painting formerly shuttered businesses in anticipation that customers will be spilling from the main part of the market into their streets.