Accessibility links
Future of AIDS Funding at Stake in Senate For months, Sen. Tom Coburn (R-OK) has led a group of senators blocking a vote on a global AIDS bill that would increase funding to $50 billion over the next five years. Majority Leader Harry Reid (D-NV) says lawmakers must reach a compromise by Tuesday, or else President Bush will head to the G8 summit empty-handed.

Listen
Future of AIDS Funding at Stake in Senate 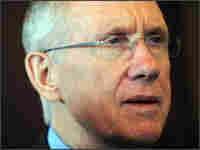 Senate Majority Leader Harry Reid, D-Nev. says senators have until Tuesday to reach a compromise on a global AIDS bill or else President Bush will head to next month's Group of Eight summit empty-handed. Tim Sloan/AFP/Getty Images hide caption

Senate Majority Leader Harry Reid (D-NV) has told Democrats and Republicans that if they want a global AIDS bill considered before President Bush heads to the Group of Eight summit next month, they will have to reach a compromise by Tuesday. Seven senators — led by Oklahoma Republican Tom Coburn — still stand in the way.

Despite bipartisan support, however, a Senate vote on the bill that authorizes funding has been blocked for months by Coburn. There are several things he and his six colleagues object to in the bill: They don't like the increase in funding from $15 billion over five years to $50 billion. In addition, they insist the bill require that 55 percent of the money be spent on HIV/AIDS treatment. And they don't want to include a provision that would cover treatment for other diseases.

"Coburn is not trying to kill the bill," says Allen Moore, a senior fellow at the Global Health Council who worked on the first authorization of the program as a Republican staff member. "I may not agree with his tactics, but he is standing in front of the bill saying, 'I like this program and I want to keep what I see as the heart of it intact and not see it frittered away and modified.'"

In a letter to Senate Minority Leader Mitch McConnell of Kentucky, Coburn said the bill has been diluted by "a host of pet development causes, including food, water, treatment of other infectious disease, gender and empowerment programs ... [that] have transformed a targeted and accountable $15 billion AIDS program into an unaccountable, unspecified $50 billion development program."

But Paul Zeitz of the Global AIDS Alliance, a nonprofit group that represents AIDS advocates and providers of service, counters that all those provisions were worked out through delicate negotiations in the Senate Foreign Relations Committee.

"There is a broad bipartisan consensus in support of the major aspects of the bill," Zeitz says, "and folks on either side of the aisle have to work towards a compromise so that the bill can be signed into law before President Bush can go to the G8." The G8 leaders of Western countries are scheduled to meet in July in Japan.

The United States contributes nearly half of the international funding for all AIDS treatment in developing countries. Bush would like other countries to contribute more money. Having a signed bill in hand at the G8 would increase his leverage with those other leaders, Zeitz says.

"It would be a real setback for the United States government and that includes the [U.S. Congress] and the administration, if President Bush goes empty-handed," he says.

Reportedly, Republican presidential candidate Sen. John McCain, the White House, and Democratic and Republican leaders have been working nonstop this week to find language that everyone can agree to in a last-minute effort to get the bill to the Senate floor.