Accessibility links
Nigella Lawson: Simple, Not Plain, Summer Fare Now that summer is here, food lovers will be gathering outdoors for all sorts of celebrations. Most people like to keep it casual, but food writer and cook Nigella Lawson says there's room for a little bit of elegance, too. 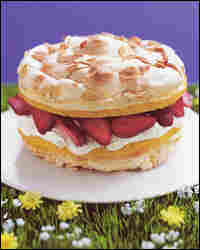 Not as Complicated as it Looks: A layer cake of strawberries and meringue cream can be assembled in under an hour. Petrina Tinslay/Hyperion hide caption 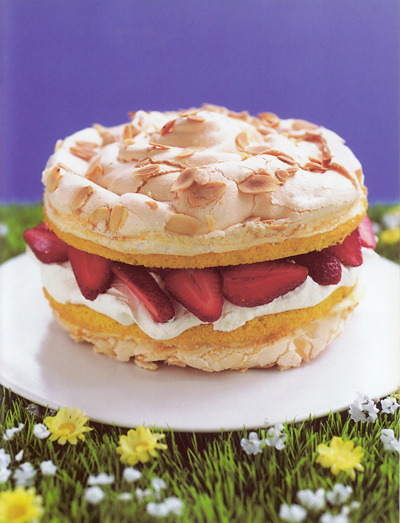 Not as Complicated as it Looks: A layer cake of strawberries and meringue cream can be assembled in under an hour.

Now that summer is here, food lovers will be gathering outdoors for all sorts of celebrations. And while most people will keep it casual, food writer and cook Nigella Lawson says there's room for a little bit of elegance, too.

Lawson talks with host Renee Montagne about how to keep summer parties simple — while adding just a touch of sophistication.

Speaking from London, Lawson says that when preparing for an outdoor meal, "you can go one of two ways, really. You can make a virtue of the picnic-type qualities — not have a proper table cloth, have everything just piled around.

"Or you can accentuate a beautiful setting and a warm day by using a pink tablecloth so the green looks greener, [putting] little roses in sugar bowls, so they're just small and sweet."

For instance, Lawson says, French picnickers have a way of "being charming about the sunshine and yet at the same time, not making a big thing of it."

"You can be formal, as long as you're not, in a way, doing with the food or the table linens, the equivalent of going out into harsh sunlight in a tight black cocktail dress," Lawson says. "That somehow looks contrived."

Lawson's advice: Cut back on the food you offer, but be sure that what you make "is simple and delicious, but it isn't fancy."

And for those looking for advice about wine, Lawson remains a strong advocate of a grape that was once the subject of sneering snobbery.

"For me, summer is rose wine. And I love it. It's the taste of summer. I tend to prefer it with a bit of club soda in it, and ice. Which probably is even more shocking for wine drinkers."

To improve the drink further, Lawson says, bring along a vegetable peeler and add a bit of orange zest.

Preheat the oven to 300 degrees.

Put the chicken pieces into a roasting pan and add the garlic cloves, lemon chunks and the thyme; just roughly pull the leaves off the stalks, leaving some intact for strewing over later. Add the oil and, using your hands, mix everything together, then spread the mixture out, making sure all the chicken pieces are skin-side up.

Sprinkle over the white wine and grind on some pepper, then cover tightly with foil and put in the oven to cook, at flavor-intensifyingly low heat, for 2 hours.

Remove the foil from the roasting pan, and turn up the oven to 400 degrees. Cook the uncovered chicken for another 30-45 minutes, by which time the skin on the meat will have turned golden brown and the lemons will have begun to scorch and caramelize at the edges.

I like to serve this as it is, straight from the roasting pan: so just strew with your remaining thyme and dole out.

Excerpted from Forever Summer by Nigella Lawson. Copyright (c) 2003 Nigella Lawson. Published in the U.S. by Hyperion. All Rights Reserved. Available wherever books are sold.

Combine the flour, cornstarch and baking powder into a bowl.

Cream the butter and 1/3 cup of the sugar in another bowl until light and fluffy. Separate the eggs and beat the yolks into the butter and sugar, saving the whites to whisk later. Gently fold in the measured-out dry ingredients, add the vanilla, then sir in the milk to thin the batter. Divide the mixture between the two prepared springform pans.

Whisk the egg whites until soft peaks form, then gradually add the remaining sugar. Spread a layer of meringue on top of the sponge batter in each pan and sprinkle the almonds evenly over.

Bake for 30-35 minutes, by which time the top of the almond-scattered meringues will be a dark gold. Let the cakes cool in their tins, then spring them open at the last minute when you are ready to assemble the cake.

Whip the cream, and hull and slice the strawberries; that's to say, the bigger ones can be sliced lengthwise and the smaller ones halved. Invert one of the cakes on to a plate or cake stand so that the cake crumb is uppermost. Pile on the cream and stud with the strawberries, letting some of the berries subside into the whipped whiteness. Place the second cake on top, meringue upwards, and press down gently, just to secure it.

If you've got any more strawberries in the house, hull and halve them, and serve them in a dish to eat alongside; it gives the cake a more after-lunch, less afternoon-tea kind of a feel, but it's hardly obligatory. 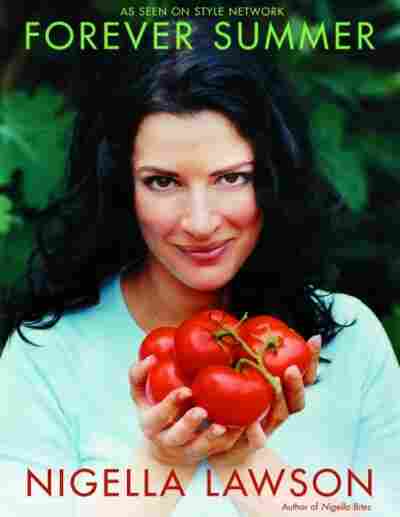 by Nigella Lawson and Petrina Tinslay