Accessibility links
Raw Milk: Panacea or Poison? Only eight states allow raw milk to be sold in stores for human consumption, but that hasn't stopped people across the country from drinking it. Fans argue that pasteurization kills good bacteria as well as bad, but experts are divided. 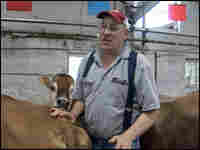 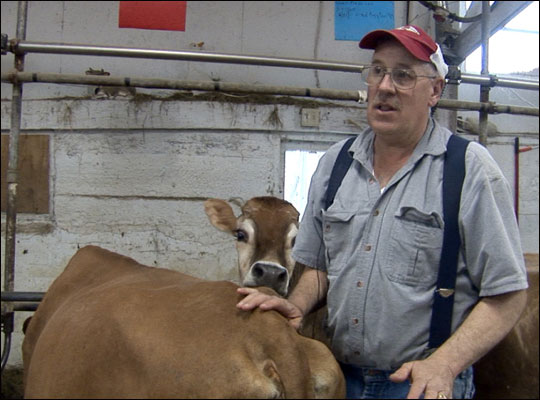 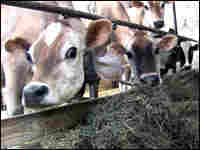 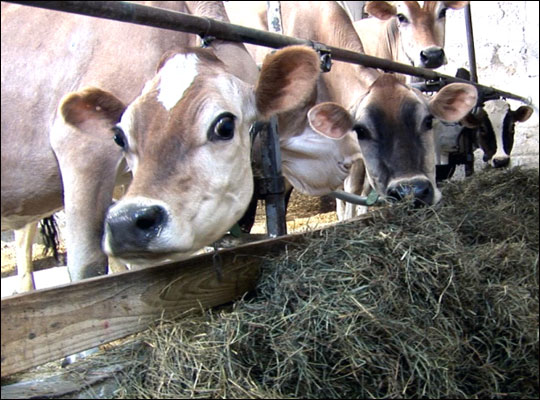 Dairy cows at the Vreelands' farm in Otisville, N.Y.

Rick and Julie Vreeland opened Freedom Hill Farm last year as a place for kids, but quickly found themselves fielding an unexpected request: The people who came wanted to buy raw milk.

In August 2007 the Vreelands began selling raw milk. In that first month they sold 13 gallons of it; last month, they sold more than a thousand.

"It was just amazing," says Rick. "It was like we put a sign out there, 'Free drugs for addicts,' because the people come and come and come, you can't believe it. Everybody wants raw milk."

Raw milk hasn't been pasteurized, meaning it hasn't been heated to destroy pathogens that may lurk inside. But that's just how raw milk lovers like it. They believe you can draw a wide range of health benefits from drinking milk raw and that in the process of eliminating potentially harmful bacteria, pasteurization kills good bacteria, too.

But the scientific community is skeptical, and governments are divided. It's illegal to sell raw milk in nearly half the U.S. and all of Canada. In some places, farmers have been dragged away in handcuffs, their barns raided and their milk seized as evidence. A battle is raging. It includes all the classic elements of a good public policy debate: black markets, big busts, competing studies and — of course — dueling PowerPoint presentations.

Freedom Hill Farm is in Otisville, N.Y., 90 miles northwest of Manhattan. Rick Vreeland, 55, is friendly, but he says his wife is the real people person in the family. Four years his junior, Julie Vreeland doesn't come across as a killer businesswoman, but she knows an opportunity when she sees one.

Julie did some research on raw milk and got a license to sell it. In New York state, it's legal to sell raw milk only at the farm where it's collected, although black market networks and "milk clubs" exist in New York City. Rick estimates that half their customers travel more than an hour to buy his raw milk, many of them bringing pamphlets, links and lectures on its virtues.

Michele Heinrich of Manhattan swears by the stuff. She's been lactose intolerant her whole life and also suffers from chronic fatigue syndrome. Over the years, she's tried everything to improve her health — soy milk and cheese, a vegetarian diet, a vegan diet, a raw-food diet; nothing worked.

Now she drinks raw milk regularly without a problem, and says she even feels more energetic. "This has been the best, so far, for me," she says, "and I've done a lot of research."

Last year, a Swiss study of nearly 15,000 European children showed that those who drank raw milk had lower rates of asthma and allergies. Another study suggested that most lactose-intolerant people can drink raw milk. That study was funded by the Weston A. Price Foundation, one of the groups leading efforts to make raw milk more accessible.

But Bruce German, a professor and food chemist at the University of California at Davis, says these studies are far from conclusive, because they don't take into account other factors that could influence a person's health.

"People that consume raw milk tend to have a wide variety of different lifestyles, diet and environmental factors that are coincident with the raw milk," he explains. "So that's why we can't say that raw milk, per se, is the reason why these effects are seen."

German says pasteurization isn't the bad guy and that "the vast majority of the beneficial components in milk are still present in pasteurized milk." Pasteurization was invented for a reason, he says: "It's not a hypothetical problem. We know that contamination of milk and other foods by pathogenic bacteria is a genuine threat, and pasteurization is a means to ensure the public safety."

The Centers for Disease Control and Prevention reports that, on average, there are 70 cases of raw dairy food poisoning in the U.S. each year, a small fraction of the estimated 76 million annual cases of food-borne illnesses.

The Food and Drug Administration declined to comment for this story, but a PowerPoint presentation on its Web site calls raw milk "inherently dangerous" and says that drinking it is like "playing Russian roulette with your health."

But the Weston A. Price Foundation put a slide-by-slide rebuttal to the FDA's PowerPoint on its Web site. Its slides point out that people get sick from pasteurized milk, too, and argue that modern advances and responsible farming can make raw milk much safer than it used to be.

German says the truth is somewhere in the middle. Good farming practices can certainly reduce the risk, he says, but they can't overcome biology.

"Some people are developing an almost beatific view of the world around them, that nature is supportive of all things for humans," he says. "Unfortunately, that's not true. Plants have evolved, many of them under a Darwinian pressure to avoid being eaten by animals, and one of the means [by which] they avoid being eaten is to develop toxic substances."

'Our Cows Here Are Absolutely Pampered'

Rick Vreeland is in the perfect position to explain the differences between a big dairy farm and a small one. At Freedom Hill Farm, they've gone from nine to 22 cows, but he used to own a dairy farm with 2,000 cows. He says he wouldn't have downed the milk from his old operation.

"When employees are milking cows at two in the morning, something could go wrong that nobody would ever know about," Rick says. "It might be an honest mistake, but it'd be a dangerous honest mistake."

At his old farm, he says, "cows were pushed to the limit" to produce as much milk as possible. They ate grain, which is cheaper than their more natural food, grass. But at Freedom Hill Farm, Rick says the cows eat better and are cleaned daily. "Our cows here are absolutely pampered."

Rick's old farm was thoroughly inspected about twice a year, and always with advance notice. Since getting a license to sell raw milk, he's been getting unannounced visits from the state inspector every other week. And that's just fine with him. He says neither he nor any of his customers has ever gotten sick from his milk.

"Our milk is pristine," he says.

But Vreeland understands why government agencies are concerned. The risk is much higher at larger farms, he says, and even he's not sure that raw milk could ever be mass produced safely.

Raw milk backers believe factory farms rely on pasteurization to let them play fast and loose with the milk, figuring the heat will kill off whatever bad stuff might get in. For that reason, most proponents don't favor an end to pasteurization. They're just tired of having to buy milk in secret.

Only eight states allow raw milk to be sold in stores for human consumption — Arizona, California, Connecticut, Maine, Pennsylvania, South Carolina, New Mexico and Washington. In others, like Florida, the milk has to be marked as pet food. In many of the states where the sale of raw milk is outright illegal, you can still drink it from your own cows, so people get around the law by buying cow shares.

Some folks have formed "milk clubs," with people taking turns driving to farms to get raw milk for everyone else. And black market delivery services have sprouted. Some farmers in the U.S. and Canada have been arrested, their operations shuttered. But that doesn't seem to be slowing down supply or demand.

At Freedom Hill Farm, rising demand or not, Rick Vreeland has no interest in expansion. His current dairy farm is a hobby, and that's just the way he likes it. "I had 2,000 cows," he smiles, "and I'm working for the county. So what's that tell ya?"