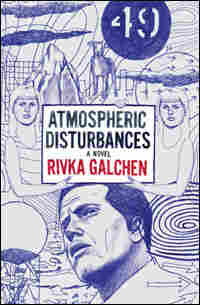 1. On a temperate stormy night

Last December a woman entered my apartment who looked exactly like my wife. This woman casually closed the door behind her. In an oversized pale blue purse—Rema's purse—she was carrying a russet puppy. I did not know the puppy. And the real Rema, she doesn't greet dogs on the sidewalk, she doesn't like dogs at all. The hayfeverishly fresh scent of Rema's shampoo was filling the air and through that brashness I squinted at this woman, and at that small dog, acknowledging to myself only that something was extraordinarily wrong.

She, the woman, the possible dog lover, leaned down to de-shoe. Her hair obscured her face somewhat, and my migraine occluded the edges of my vision, but still, I could see: same unzipping of wrinkly boots, same taking off of same baby blue coat with jumbo charcoal buttons, same tucking behind ears of dyed cornsilk blonde hair. Same bangs cut straight across like on those dolls done up in native costumes that live their whole lives in plastic cases held up by a metal wire around the waist. Same everything, but it wasn't Rema. It was just a feeling, that's how I knew. Like the moment near the end of a dream when I am sometimes able to whisper to myself, "I am dreaming." I remember once waking up from a dream in which my mother, dead now for thirty-three years, was sipping tea at my kitchen table, reading a newspaper on the back of which there was the headline "Wrong Man, Right Name, Convicted in Murder Trial." I was trying to read the smaller print of the article, but my mother kept moving the paper, re­adjusting, turning pages, a sound like a mess of pigeons taking sudden flight. When I woke up I searched all through the house for that newspaper, and through the trash outside as well, but I never found it.

"Oh!" the simulacrum said quietly, seeming to notice the dimmed lights. "I'm so sorry." She imitated Rema's Argentine accent perfectly, the halos around the vowels. "You are having your migraine?" She pressed that lean russet puppy against her chest; the puppy trembled.

I held a hushing finger to my lips, maybe hamming up my physical suffering, but also signing truly, because I was terrified, though of precisely what I could not yet say.

"You," the simulacrum whispered seemingly to herself, or maybe to the dog, or maybe to me, "can meet your gentle new friend later." She then began a remarkable imitation of Rema's slightly irregularly rhythmed walk across the room, past me, into the kitchen. I heard her set the teakettle to boil.

"You look odd," I found myself calling out to the woman I could no longer see.

"Yes, a dog," she singsonged from the kitchen, still flawlessly reproducing Rema's foreign intonations. And, as if already forgetting about my migraine, she trounced on, speaking at length, maybe about the dog, maybe not, I couldn't quite concentrate. She said something about Chinatown. And a dying man. Not seeing her, just hearing her voice, and the rhythm of Rema's customary evasions, made me feel that she really was my wife.

But this strange impostress, emerging from the kitchen moments later, when she kissed my forehead, I blushed. This young woman, leaning over me intimately—would the real Rema walk in at any moment and find us like this?

"Rema should have been home an hour ago," I said.

"You brought home a dog," I said, trying not to sound accusatory.

"I want you to love her, you'll meet her when you feel better, I put her away—"

"I don't think," I said suddenly, surprised by my own words, "you're Rema."

"No," I said and turned to hide my face in the sofa's cushions. "I'm sorry," I mumbled to the tight wool weave of the cushion's covering.

She left my side. As the water neared its boil—the ascending pitches of our teakettle's tremble are so familiar to me—I reached for the telephone and dialed Rema's cell. A muffled ring then, from the purse, a ring decidedly not in stereo with the sound from the receiver in my hand, and the ersatz Rema thus hearkened back out to the living room, now holding the dog, and then the tea­kettle whistling, and, literally, sirens wailing outside.

She laughed at me.

I was then a fifty-one-year-old male psychiatrist with no pre­vious hospitalizations and no relevant past medical, social, or ­family history.

After the impostress fell asleep (the dog in her arms, their breathing synchronous) I found myself searching through Rema's pale blue purse that smelled only very faintly of dog. But when I noticed what I was doing—unfolding credit card receipts, breathing in the scent of her change purse, licking the powder off a half stick of cinnamon gum—I felt like a cuckolded husband in an old movie. Why did I seem to think this simulacrum's appearance meant that Rema was deceiving me? It was as if I was expecting to find theater tickets, or a monogrammed cigarette case, or a bottle of arsenic. Just because Rema is so much younger than me, just because I didn't necessarily know at every moment exactly where she was or what, precisely, in Spanish, she said over the phone to people who might very well have been perfect strangers to me and whom I was respectful enough to never ask about—just because of these very normal facets of our relationship, it still was not necessarily likely—not at all—that she was, or is, in love with some, or many, other people. And isn't this all irrelevant anyway? Why would infidelities lead to disappearances? Or false appearances? Or dog appearances?

Excerpted from Atmospheric Disturbances by Rivka Galchen. All rights reserved.