Accessibility links
Unlikely Heroes: Goats Rescue N.Y. Bog Turtles An invasive weed is drying up the swamps that house the last of New York's endangered bog turtles. But the turtles have an unlikely savior: The government and a nonprofit are bringing in goats and cattle to eat the weeds and restore the swamps. 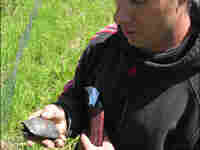 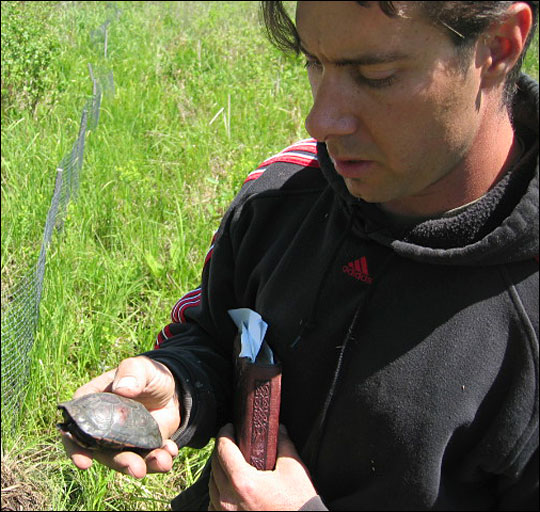 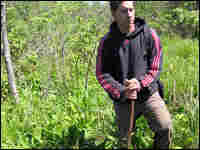 Jason Tesauro stands in a swamp in New York's Hudson River Valley, which is one of the last homes of the bog turtle. Jeremy Coleman/USFWS hide caption 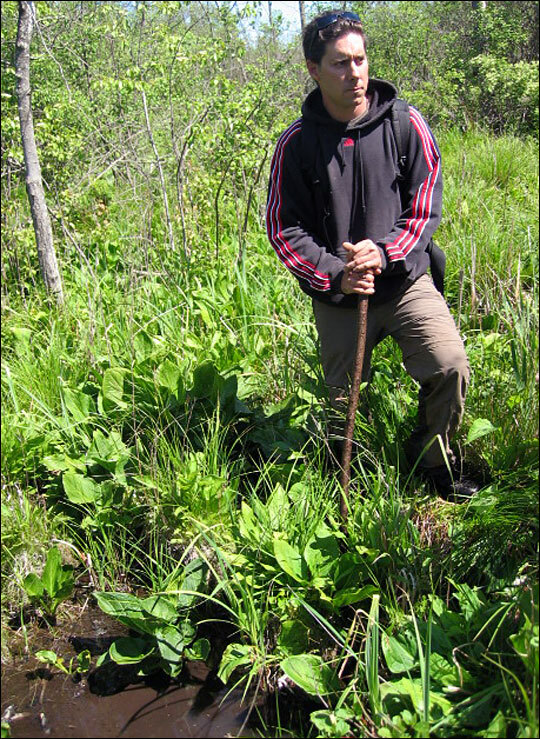 Jason Tesauro stands in a swamp in New York's Hudson River Valley, which is one of the last homes of the bog turtle. 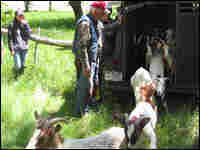 John Addrizzo lets his goats out of their trailer to feast on the phragmites that threaten to dry out the swamp. Jeremy Coleman/USFWS hide caption 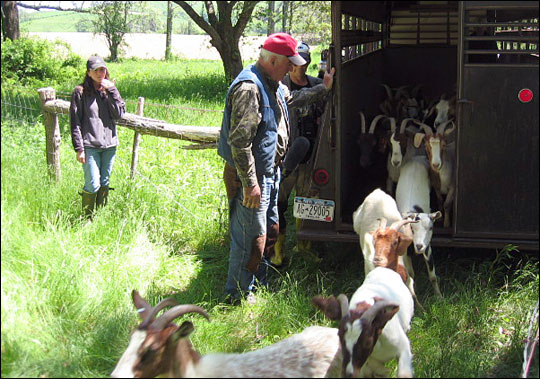 John Addrizzo lets his goats out of their trailer to feast on the phragmites that threaten to dry out the swamp.

The last of New York's wild bog turtles live in swamps that have long been sunny, mucky places full of low green plants and waist-deep mud pits. But an invading foreign weed threatens to transform the swamps and wipe out the turtle population.

The old-fashioned way to save endangered species such as the bog turtle was to build a fence around them to keep people and farm animals away. That method has been turned upside down in New York's Hudson River Valley, where domestic goats and cows are instead trotting to the rescue of the turtles and their murky swamp home.

The mud pits that fill the region's swamps are actually a mess of hidden streams that the bog turtles use like freeways, says Jason Tesauro, who works for the Environmental Defense Fund.

"This is the female we always find at this site," he says, pulling a turtle out of a mud puddle. The small adult bog turtle rests in the palm of Tesauro's hand. It is mild-mannered, he observes, as the head re-emerges from the 3-inch shell.

"That's as big as they get," says Tesauro. "You can see she has an orange neck patch. That's sort of diagnostic. And she's old. You can tell from the smoothness of her back. That's from the abrasives in the soil."

It's likely that bog turtles live for more than 80 years in sunny swamps like this one, he says.

But a giant foreign weed has invaded many of these swamps and threatens that bright future. Known as phragmites, or the common reed, it grows quickly into dense thickets that steal the sunlight and dry out the soil.

"It seems to be moving at a good 10 feet a year," says Tesauro, who has worked in the swamps for five years.

Mowing is not a solution because the weeds grow back quickly. However, Tesauro says he rarely sees phragmites in a well-grazed pasture.

Which helps explain why John Addrizzo, the owner of a company called New York State Meat Goat Associates, has a tractor-trailer full of goats parked on the far side of the thicket.

Goats to the Rescue

Addrizzo drove the trailer up from New York City. As he opens the trailer's doors, the goats bound out, straight into the foreign phragmites patch. The goats will eat all of the plants they can find in the swamp — Addrizzo calls it browse — and then find more, he says.

"Goats prefer browse to anything else," he says. "So what happens is that they'll eat all the browse and when that happens they'll start to girdle the trees. They bite around the edge, and it just kills them."

Addrizzo says the thought of using goats to save endangered turtles used to seem ridiculous to him. Then the U.S. Department of Agriculture, which is working in collaboration with the Environmental Defense Fund and the U.S. Fish and Wildlife Service, started paying him to do it. Now it seems like a crazy plan that just might work.

"It's a unique project," he says. "Plus they fertilize the area, so there's a little give and take."

The native plants devoured by the goats tend to bounce back in a hurry, says Tesauro. But the big phragmites thickets cannot survive the constant grazing.

"They will knock down all the standing biomass within a season," he says. "If you were to come back here two months from now, we could stand here and see the back line of that fence — and we can't see any of it now."

A neighboring swamp several miles up the road is a model for the environmental effect that goats or other livestock can have. A year ago, the area was one big, dried-out weed patch, says Tesauro. Now, after a herd of hungry livestock devoured the phragmites, it's a sunny swamp again.

The rare bog turtles are returning and laying eggs on dried-out dirt mounds, he says.

"The turtles actually said this is a pretty nice nesting habitat," he says. "We're doing good here for sure."

This neighboring swamp was actually cleared by local dairy cattle and not goats shipped in from New York City, says Tesauro. He hopes to continue to use cattle to devour phragmites after the federal funds that pay for the goats run out in a few years. However, he says that plan depends on the small farmers who own the cattle remaining on their farms — an uncertain future, as more and more of them sell their farms to wealthy people from New York City.