Accessibility links
Marines Try to Improve Image in Taliban Stronghold Marines in Garmsir, a district in Helmand province, Afghanistan, are paying for home repairs in an effort to curry favor with locals. They're also on the lookout for suicide bombers and deadly roadside bombs. 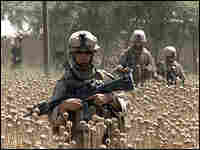 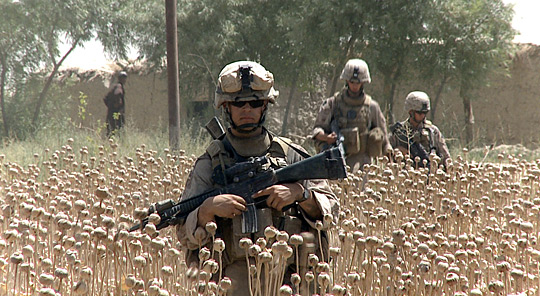 U.S. Marines in Afghanistan on foot patrol in a poppy field in southern Helmand province.

It has been a month and a half since a force of some 1,500 U.S. Marines attacked the Taliban stronghold of Garmsir district in the Helmand province of southern Afghanistan.

After 30 days of nonstop fighting, the Marines succeeded in capturing the area, which also happens to be one of the biggest opium-producing regions in the country.

Now these American troops are trying to win the confidence of the locals, while also being on the lookout for suicide bombers and deadly roadside bombs.

On one late afternoon, a shot rings out from one of the guard posts protecting the Alpha Company's mud-walled compound in Garmsir. It is a warning shot fired by the guard on duty, Lance Cpl. Clayton Blunt, aimed in the direction of an Afghan man on a passing motorcycle.

The Afghan man gets off his motorbike, hands in the air. A sergeant tells Blunt that the man needs to ride farther from the building when coming by on his bike.

The Marines are on alert after receiving reports that two suicide bombers on motorbikes have crossed the nearby border with Pakistan and are now looking for targets.

The incident ends without bloodshed, but Marines like Cpl. Eric Garris are still tense.

"We've gone two weeks now without hearing any gunshots," he says. "And that's scarier than hearing gunshots every day, because now that just means they're hiding better or they're gone. You never know."

With the intense fighting over, Dynan's company of Marines is now scattered across the district. They are occupying crude mud-brick farmhouses, living side by side with Afghan villagers and, they believe, with enemy insurgents.

Asked if he thinks the Taliban are watching his men, Dynan points across the barbed wire that separates his camp from a nearby bazaar.

Despite the constant threat of attack, the Marines are trying to win the hearts and minds of the civilian population in Garmsir.

Until recently, Sgt. James Blake was part of a mortar team, lobbing shells at Taliban targets. Now, he is part of a team that is trying to compensate hundreds of residents whose homes were destroyed or damaged in the fighting.

"It says here that basically your whole building was destroyed by a 2,000-pound bomb," Blake says to a resident. "Sir, for all the damage we cost to your home, in order to help you rebuild and get your trees and everything back, what we can offer in repayment is 243,000 Afghani [around $4,800]."

Blake instructs the Afghan man to return for his payment on July 1. So far, the Marines have pledged to pay close to $150,000 to help 80 Afghan families rebuild their homes.

Asked if he is confident that the money will come through by July 1, Blake says, "I really hope so ... I think if it doesn't come, there might be a riot."

Despite the outreach on the part of the Marines, the locals have not exactly embraced their new American neighbors.

A group of Afghan men sits in the shade and watches as several Marines struggle to pull a Humvee out of a patch of deep sand.

"They should leave this village," says Abdul Samad, a gray-bearded farmer. "We can't even walk out of our houses any more. If we step out the door," he adds, "they shoot at us."

Part of the discord between Marines and locals is that almost everybody in Garmsir relies on the illegal opium industry to make a living.

Many Afghan farmers here worry the Marines will bring an end to their cash crop.

"Dealing with the poppy isn't really our job," says Lt. Jack Trepto. "We don't mess with them."

Every day, Trepto leads patrols through what he describes as "the opium capital of the world." Marines on foot patrol pass through fields of waist-high poppy plants and skirt fields of cannabis.

"A lot of the people in this area, they have nothing or next to nothing," Trepto says. "For some of them, their entire livelihood is based off of the poppy crop any given year."

To avoid alienating the locals, the Marines have been forced to make some difficult concessions.

One day, the Afghan landlord who is renting his house to Dynan's company showed up and spent half an hour digging up three trunks that were buried under a wood pile. The trunks contained soccer ball-sized chunks of opium and processed heroin, a year's worth of work, which the landlord was permitted to take away.

The Marines say the Afghan government is responsible for enforcing the ban on growing poppy, but in the weeks since the fighting stopped here, neither the government nor Afghan security forces have established a presence in Garmsir.

In the span of a week, Garmsir's police chief, Gule Khan, showed up just once for a brief meeting with 1st Lt. Micah Steinpfad.

"Our intel tells us that there are still a number of Taliban in the area," Steinpfad says to Khan. "And we're very excited to get you guys down here to start getting those guys out."

Through a translator, Khan tells Steinpfad that he will not be able to assist the troops.

"For right now, I'm very busy," he says. "I don't have that much soldiers and stuff."

For the moment, at least, the Marines appear to be on their own in Garmsir.

Capt. Dynan, the commander of Alpha Company, says this is an essential element to a successful counterinsurgency campaign.

"We knew ahead of time that we would have to focus on the locals," Dynan says. "We're only as good as our interaction with the local populace."

Dynan says the local reaction over the next few weeks in Garmsir will be critical to the counterinsurgency campaign.

Video: U.S. Marines patrol in the 'opium capital' of Afghanistan.