Accessibility links
Ultra-Rich Collectors Help Keep Art Market Afloat An $80 million auction sale of a work by Claude Monet illustrates that while most ordinary people are cutting out non-essential spending, wealthy art collectors aren't. The weak dollar is one reason why a very small group of ultra-rich buyers is keeping the high-end art market alive. 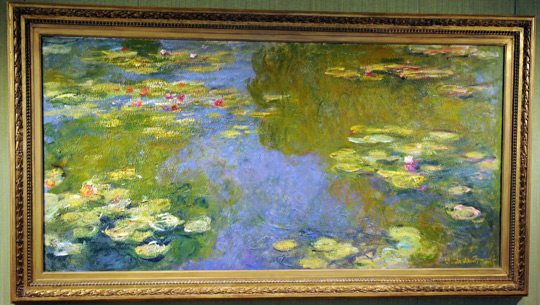 Like most everything else, the price of waterlilies is going up. A painting from Claude Monet's waterlily series auctioned off Tuesday night in London smashed the previous record for a work by the impressionist, fetching $80.5 million.

The eye-popping sale illustrates that while most ordinary people are cutting out non-essential spending, wealthy art collectors aren't. Just last month, a painting by Lucian Freud sold for over $33 million — the most ever for a work by a living artist — and a Francis Bacon triptych went for more than $86 million.

Aaron Levine is one of those collectors. Ten large prints bursting with pastel and fluorescent pinks, yellows and blues hang just outside the elevator in his law office. On closer inspection, each print has an electric chair at its center.

"People don't know they're Andy Warhols, and when they ask, I tell them these are clients whose cases I lost," says Levine, a trial lawyer who has successfully sued pharmaceutical companies over the past several decades.

He and his wife are serious art collectors. Works by Warhol, Jasper Johns, Roy Lichtenstein and dozens of other established artists grace the walls — and that's just his office.

During a trip to Art Basel, the big art fair in Switzerland earlier this month, he says he didn't see "any lessening in the ferociousness of the contemporary art collector nor their pocketbook."

But he did notice one difference: "In Basel," Levine says, "it used to be one-third Americans and now it's about 10 percent Americans."

One reason for the shift is the weak dollar. Another is new wealth overseas. It seems that a very small group of ultra-rich buyers is keeping the high-end art market alive.

Josh Baer, a private dealer who writes the arts industry blog The Baer Faxt, says the new collectors are from places such as Russia and India.

"Five or 10 years ago, they had nothing on their walls," Baer says. "The American collectors, the major ones, have been collecting for 20, 30, 40 years. They have master-works, so they're in less of a hurry to need to buy one more."

While the economy has whittled the number of bidders, it also has affected how purchases are made.

Ian Peck, president of the Art Capital Group, says his company lends money to people who want to buy art. They use the artwork itself as collateral for the loan. Peck says he has seen a 30 percent increase in the number of loan applications from this time last year.

"One reason we attribute that is to economy, because some people need liquidity to cover other investments they have that may not be doing so well," Peck says.

So what does this all mean for average art lovers who get their art fix from museums?

Jonathan Fineberg, an art history professor at the University of Illinois, says, "Museums can no longer afford to buy the great works of art because they have consistently been outbid by private individuals making huge amounts of money in the corporate world."

He also notes that many excellent private collectors routinely lend to public museums.

The public good, though, is hardly on the minds of folks at Sotheby's and Christie's. Both are holding auctions in Paris and London this week. And there's no sign that the art market bubble is ready to burst.

The archived audio for this story incorrectly states: "Last month, a work by Lucien Freud fetched more than $33 million — the most paid for a work by a living artist." We should have said it was the most paid for such a work at auction. The Jasper Johns painting "False Start" sold for $80 million in 2006.