Accessibility links
Nonprofits Look For New Ways To Shape Campaign No outside organization has thrown a roundhouse punch this election season like the one Swift Boat Veterans for Truth delivered four years ago. But they're quietly mobilizing, using small staffs and new technologies to stoke the public's attention. 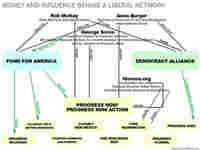 Click to see a chart on the money and influence behind a liberal network. Center for Investigative Reporting hide caption

The 2008 presidential campaign began with predictions that outside groups would play influential roles. So far, though, none has thrown a roundhouse punch like the one Swift Boat Veterans for Truth delivered when it attacked Democrat John Kerry's war record four years ago. But nonprofit organizations are quietly mobilizing, especially on the left.

One network of liberal activist groups, Progress Now and its eight affiliates, is trying to shape the debate with a streamlined operation of small staff, low budgets and the Internet.

Michael Huttner, Progress Now's director, says the Colorado-based group is taking advantage of old media and new technologies to gin up interest for an issue.

"We'll put out a press release for the mainstream media, and then literally hours later, we'll send out an e-mail on the same topic to tens of thousands of people," Huttner says. "The press actually get those e-mails sent to them. And then the press decides to write a story. And then when people read the story, then they go to the Web site and even take further action."

Officially, the Progress groups aren't considered political organizations. They operate as nonprofits under section 501(c) of the tax code. That means they have to talk in terms of issues, not candidates.

Still, there's no mistaking where their hearts lie.

And the Alliance for a Better Minnesota bought TV airtime for an ad attacking Republican Sen. Norm Coleman. It states, "Coleman voted to give oil and gas companies billions of dollars in tax breaks. Maybe that's why oil and gas interests have given Coleman hundreds of thousands of dollars in campaign contributions."

But TV is expensive. And the Progress groups don't consider such ads their main mission.

"The big hole in the progressive infrastructure that we filled was that in each state, we act almost like a PR firm to help all the different progressive organizations," Huttner says.

The Left has never had anything like this — a place in cyberspace for groups to coordinate and deliver their messages to activists. And there's nothing like it on the Right.

The Progress Now network began forming in 2006. Initial financing came from a coalition of big-dollar donors called the Democracy Alliance, which wants to build a long-lasting progressive infrastructure.

"You know, we're in an instant news kind of world now, where you walk downtown even in Midwestern cities like Columbus and there are streaming things on the side of buildings that give you news," Rothenberg says.

But in the digital world, he says, it's hard to know for certain how well any new strategy works. For instance, he says, Progress Ohio signs up 150 new activists per day.

Michael Cornfield doesn't know, either, and he studies online politics as a professor at George Washington University's graduate school of political management. He says it's hard to measure the effects because almost anyone can send out e-mail.

"The sticking point is that because of the low costs, you have many more organizations competing for people's attention, and there's little evidence yet that the percentage of voters who are also activists has increased," Cornfield says.

But Huttner says there's also little evidence that the Progress groups are suffering financially — despite the fact that Democratic candidate Barack Obama told his donors last month not to give money to independent groups.

Apparently, they're finding ways to reach donors just fine on their own.

This story includes reporting by the Center for Investigative Reporting.