Listen
Where You Live Makes a Difference

Discuss: Who's Your City? 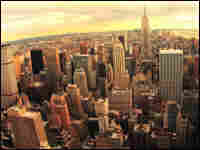 You already know that where you live is important.

But Richard Florida may have something new to tell you about why it's important — and about why it may become more important in the future.

Florida is the author of the new book Who's Your City? The subtitle of the book goes part of the way towards explaining his theory: How the Creative Economy Is Making Where To Live the Most Important Decision of Your Life.

Florida says that there are about 40 of what he calls "mega-regions" around the world. These mega-regions, he says, only account for about 18 percent of the world's population, but produce more than two-thirds of its economic output. He says that nine out of every 10 innovations in the world come from mega-regions.

While most people have come to look at the dispersive tendencies of globalization, Florida says he focuses on the tendencies of people to cluster in geographical areas because of common interests and available opportunities. Once enough people start locating to an area for a specific reason, others follow, creating a critical mass that, in turn, attracts more people.

Florida says that in addition to obvious mega-regions like New York and Los Angeles, he's been seeing the growth of other areas, like Nashville, powered by the music industry, or Montreal, which has surprisingly attracted video game producers. He says one reason is that young people can still find "the proverbial garage" in which to innovate and work on new technologies.

One of the questions that fascinates Florida is why some smaller urban regions succeed, while others fail. "Why does Toronto rise, and Buffalo fall?" he asks. He says that there's a special burden on smaller places: They can't afford to make any mistakes.

The growth of mega-regions does not come without problems. "The congestion in these mega-regions will require that not all of us are commuting 9 to 5," he notes. "Increasingly, we will be working to a very different rhythm of the working day."

Florida says that while he thinks population clusters will continue to grow, there are countervailing forces, including globalization and the Internet. "There is a pull force and a push force, and they operate in tension — if not, everything would be clustered in one giant city."