Accessibility links
John McCain's War on Russia Michael Signer, of the Center for American Progress, discusses John McCain's proposal to kick Russia out of the G8.

Michael Signer, of the Center for American Progress, discusses John McCain's proposal to kick Russia out of the G8. 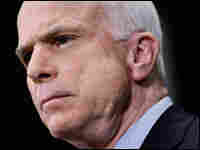 Back on March 26th, John McCain gave a speech in front of the Los Angeles World Affairs Council, his first major foreign policy address since becoming the presumed Republican nominee. Here's what he said about our former Cold War enemy and the future of trans-Atlantic relation.

Senator JOHN MCCAIN (Republican, Arizona): We should start by ensuring that the G8, the group of eight highly industrialized states, becomes again a club of leading market democracies. It should include Brazil and India, but exclude Russia.

PESCA: Newsweek editor, Fareed Zakaria, called McCain's plot to push Russia out of the G8, quote, "the most radical idea put forward by a major candidate for the presidency in 25 years." So how come this major foreign policy issue has flown so low on the media and the general public's radar this election season? What else might we all be missing as we talk about Iran and Iraq? Well, Michael Signer was the foreign policy advisor for John Edwards and he's also the senior policy advisor at the Center for American Progress. Hello, Mr. Signer.

PESCA: What do you notice about John McCain wanting to boot Russia out of the G8? Did it immediately set off bells in your head? Or are you like the rest of us and just figured that out months after the fact?

Mr. SIGNER: Well, it was interesting. Actually, he first made the proposal that I know of in a cover article in the magazine Foreign Affairs last November, which even goes more to your point, which is it's a really profound proposal with pretty vast implications for this relationship we have with Russia and Russia's direction in the world. And you're right. It's kind of throwing a stone in the pond.

Mr. SIGNER: Well, I feel fairly strongly that campaigns are generally trying to find as much political advantage as they can, both on - both positively in constructing a case for their candidate, and also - we call them contrast issues, where you find something that really, you know, creates a vast distinction between the different candidates. That happened last fall with Iran, for instance, to declare the Revolutionary Guard a terrorist organization.

That became a very powerful issue in the Democratic primary, even though it was about a country that a lot of people - that hadn't gotten into the race all that much. But you know, if John McCain really put - these are major foreign policy speeches. When he did that speech, the campaign wants a lot of coverage on it. I mean, when you put it in a cover story, you know, in a magazine like Foreign Affairs, you trying to make news. These campaigns are trying to make news most of the time, so I really do think the blame falls more on the media than on the campaign.

PESCA: I will accept that, but what about the Barack Obama campaign? Shouldn't he be jumping up and down, quoting Fareed Zakaria, who is not a guy who is hostile to Republicans by any means, and also a very respected guy, just kind of trying to talk about how radical an idea this is? Why isn't the Barack Obama team doing that?

Mr. SIGNER: Well, I wouldn't be surprised if that does happen. I mean, he really has been only just shifting into this role as the nominee over the last couple weeks. The Russia proposal by John McCain, I think, is - could be a tremendous flashpoint in talking about these two, you know, the two approaches.

And the Obama campaign, if you will notice, they really started rolling out a way of talking about McCain as Bush Redux, you know, really doubling down on a lot of the approach of the Bush presidency, and in as much as this would be, you know, returns belligerence, to a strongly unilateral approach, to not sort of thinking around the next corner but doing what seems right, you know, at the moment. I mean, this proposal is to lock Russia out of the G8.

Most expert opinions agree that the biggest mistake we can make with Russia is not embracing the more within the fold of the West and all of our institutions. And if we take a stance for them that turns them away and makes them buck against all of our institutions, the United States, and turns to the East, then we - it's a very dangerous course and we have - we are tremendously interlinked with them now on issues from nuclear proliferation, to obviously, gas and oil, especially right now, to issues like how to deal with Iran. We've gotten a lot of support from them recently in dealing with Iran's nuclear ambition. So it's a really bizarre proposal he made and I think it will - I would not surprised if the Obama campaign does give it a lot of attention.

Mr. SIGNER: Yes. And they - he thinks it's a complicated relationship, I mean, which is a part of - you know, there are limits. I mean, you know, it's, like, you listen sometimes to what people say and what people don't say, and each can speak volumes. And Obama has talked about the framework that he would have for Russia. He said that it's a complicated relationship there. They are at the same time a partner as well as a competitor. There are very alarming trends going on in Russia, with, you know, the trend toward authoritarianism and against democracy.

At the same they have, again, worked constructively with us on some economic issues against Iran. And so he has talked generally about a framework, which is very instructive. I mean, part of what goes on within the foreign policy element of these campaigns is you do get a clue into how the candidate would approach different issues, and you can - you know, sometimes it does rise to the level of politics, which is, I wouldn't be surprised again if that does happen with the Russia vote.

But sometimes you just listen to how a candidate would approach an issue and that tells you a lot about how they would be as commander in chief, and I do think Obama has done that. He has talked about Russia, going back to his own foreign affairs piece last fall. And he has - in the campaign, he has talked about how he would deal with it.

PESCA: I know that you are very frustrated with the lack of attention and your candidate, John Edwards, got with a lot of his policy speeches. That's politics and it's, like we all said, the shame of the media, to some extent. But can you, very quickly - let's say that you were advising the networks who are conducting the next debate, and they said, give me a curveball foreign policy issue to throw these guys. Can you suggest one?

Mr. SIGNER: Well, one would be if you take as a premise that the world we're in right now is dramatically changing, even year to year, you have a very - it is literally a new world. You have powerful non-state actors from terrorist groups to ethnic movements that are re-shifting the boundaries of nation-states. You have, you know, new multi-lateral organizations. You have corporate powers that are very powerful.

You have globalizations. You have Brazil, Russia, India, China, which are called the brick countries, which are growing in their powers. How does a candidate think about themselves in that new world? What is their foreign policy for the new world? Do they see themselves as not just adapting but as moving forward, into a new world that itself is changing. That is a very...

PESCA: That is a good question. Michael Signer, senior policy advisor for the Center for American Progress. Thanks very much.

Mr. SIGNER: Oh, you're welcome. Thanks a lot.

PESCA: We'll be back on the BPP on NPR.