Accessibility links
Baghdad Officials Fear Outbreaks From Dirty Water Health officials have been sending warnings to avoid tap water and ice, which they say is tainted. But those most at risk are people who live in the city slums, where few have cell phones or television to receive the notices. 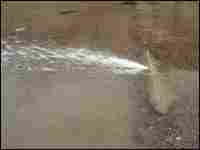 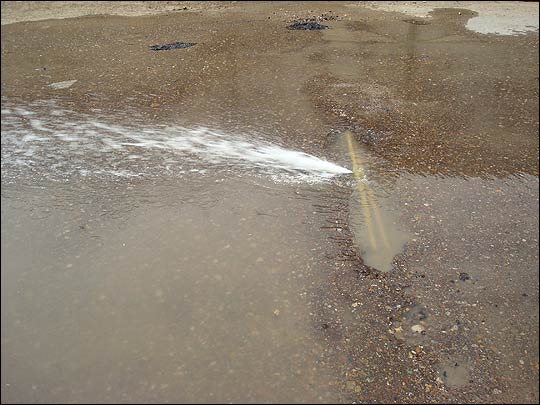 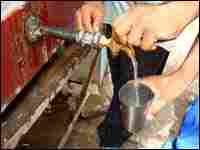 Water provided free by ice vendors is not always boiled or treated to prevent water-borne diseases such as typhoid and hepatitis. Haidar Aljumaily for NPR hide caption 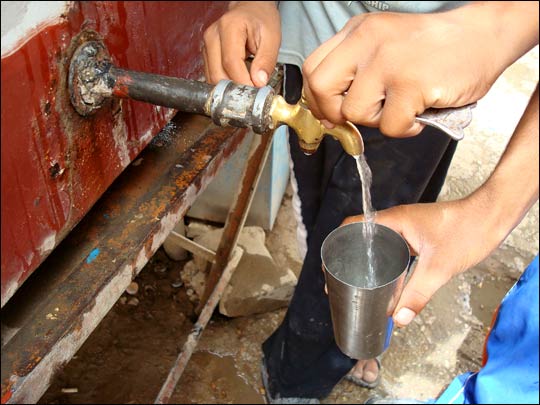 Water provided free by ice vendors is not always boiled or treated to prevent water-borne diseases such as typhoid and hepatitis.

In Baghdad these days, many Iraqis have been finding text messages on their cell phones from the Ministry of Health warning them not to drink untreated tap water.

Health officials say tap water all over the city is unsafe and that they fear an outbreak of typhoid or other water-borne diseases during the baking hot months of summer.

Those most at risk are people who live in the city slums, where few have cell phones or television to receive health warnings.

Doctors in the children's ward of Fatima al-Zahra Hospital see dozens of patients each day with symptoms of water-borne diseases. One mother tells Dr. Abbas al-Nuaimi that her 3 1/2-month-old baby girl has been throwing up and suffering from diarrhea. A doctor gave the baby injections, but the diarrhea has gotten worse.

Nuaimi says he sees many such cases in infants and toddlers, and the source is almost always contaminated drinking water. He says the most common diseases are dysentery, typhoid and heptatitis.

Water-borne diseases are common in poor countries that have no sewage or clean-water systems, but Baghdad once had such things. Dr. Fadhil al-Mehdawi, Director of Community Medicine at the Ministry of Health in Baghdad, says the pipes have been wrecked by years of neglect and war.

Mehdawi says both water and sewer pipes are broken or cracked in many places, allowing untreated fecal matter to mingle with the tap water. He adds that chronic electricity outages in the city mean that water treatment and pumping stations often stand idle, so even polluted tap water isn't always available.

In Sadr City, one of Baghdad's poorer neighborhoods, school supervisor Jabar Ali says people sometimes go for three or four days without any tap water at all. So whenever water comes through the pipes, desperate people will rush to drink it or store it up.

Ali says the government's clean-water education campaign is too little, too late. TV and cell phone text messages are all very well, he adds, but the government should keep in mind that most people in his area are uneducated, without cell phones or even electricity to power radios and TV sets.

In a small market street in Sadr City, people line up at a stand where an ice seller, Abu Hassan Hadi, is attracting customers by offering free glasses of water. Everyone drinks from the same glasses, but Abu Hassan insists that the water is clean. And, he says, the same goes for the chunks of ice he's sawing.

He says he buys his ice from factories that take it directly from the Tigris River, not the city water system, and treat it with chemicals. Hassan says that his business is best when there's no electricity, because people need ice to keep food from spoiling in the summer heat.

Health Ministry officials warn people that ice is just as likely to be contaminated as water is. They urge people to keep food and water in their ice chests from coming into direct contact with the ice.

Dr. Nuaimi, at the hospital, says he knows of no major steps that the government is taking to rebuild the water and sewage systems. He says he has heard many promises for future development of these systems, but "in what future, I don't know."

Mehdawi, at the Health Ministry, says that most people in Sadr City have already contracted hepatitis A from tainted water and that officials are bracing for more dysentery and typhoid cases this summer.

The audio version of this story — and an earlier Web version — mistakenly said Iraqis had contracted Hepatitis B from tainted water. In fact, the Hepatitis B virus is not spread by contaminated food or water. We should have said "Hepatitis A." Also, the Iraqi Health Ministry official interviewed for this story was misidentified as "Dr. Fathil al-Hadawi." The correct name is Dr. Fadhil al-Mehdawi, Director of Community Medicine at the Ministry of Health in Baghdad.