Accessibility links
Major Change Ahead in Internet Naming The lifting of restrictions on Net domain names will have a worldwide impact on the World Wide Web, says one technology writer. 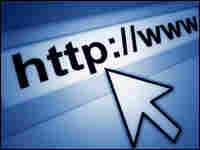 Internet regulators are voting this week on proposed changes to the way Internet sites are named.

At first, it might not seem like an enormous change, but BBC News Technology Editor Darren Waters says it will have a worldwide impact on the World Wide Web. It could usher in the greatest transformation to the Internet in decades, he says.

The Internet Corporation for Assigned Names and Numbers (ICANN), the committee that oversees names on the Internet, is expected to lift restrictions Thursday on the domain names people can use for Web sites.

The domain names are the letters that follow the dot in Internet addresses. Currently, only an approved pool of domain names is allowed, like .com or .org to signify a company or nonprofit, or .fr or .ca for countries like France and Canada. The change, almost certain to be ratified Thursday, will mean that virtually any domain name would be allowed.

"For the very first, time we'll have a strong guarantee that there will be one Internet for all of us," Waters says. Currently, there's no way for people who use characters other than those in the Latin, or Roman, alphabet to have domain names. The change will allow other alphabets, Waters says, addressing a concern that the Internet might break down into sections by language and region.

There are major questions ahead, however and Waters says that ICANN expects some teething pains. Many domain names, like .sports, for example, are going to be in heavy demand. ICANN will set up a bidding process, with the costs of securing a much sought-after name likely to be extremely high. Waters estimates that the cost of even a basic domain name will be in the $50,000 range.

Successful bidders for domain names could then sell the rights to use the names to others, setting up an enormous secondary market. But, he says, "we're not going to see massive land grab like we did back in the early days. Those with money are going to buy the big ones."

The money from the direct sale of domain names, however, will go to ICANN, a nonprofit organization. "They say they're not going to be making any money out of it," says Waters. "The problem is, it's not entirely clear where this money will end up, and this is one of the things we need to find out, whether this money will be used sensibly for the betterment of the Internet in the future."