Accessibility links
Robotic Baby Seal Coming to U.S. Shores A company that makes a robotic baby seal from Japan named Paro plans to sell it in the U.S. to help comfort people with dementia, autism and other problems related to social isolation. But some doctors say real pets provide the best kind of therapy. 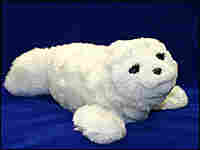 Paro, a robotic baby seal, will be sold to hospitals and nursing homes in the U.S. to help comfort people with dementia, autism and other problems related to social isolation. hide caption 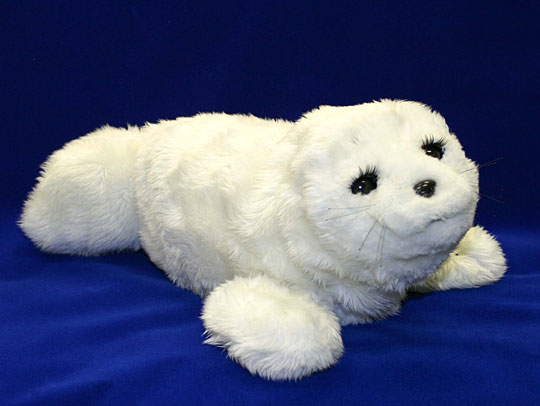 Paro, a robotic baby seal, will be sold to hospitals and nursing homes in the U.S. to help comfort people with dementia, autism and other problems related to social isolation.

A baby seal from Japan is about to set flipper on U.S. shores. But unlike its wild counterparts, this seal is one that people are encouraged to touch and hold for as long as they like.

That's because it's a robot.

It's been available in Japan for several years, but now the company has created a Florida-based unit, Paro Robots U.S. Inc., to sell the fuzzy creature to places like nursing homes and hospitals. The robot, named Paro, is marketed as a therapeutic device that can help comfort people who have dementia, autism or other problems that can lead to social isolation.

Takanori Shibata, an engineer at Japan's National Institute of Advanced Industrial Science and Technology, invented Paro. He says the robot, which weighs about 6 pounds, has high-tech innards, including sensors that enable it to respond to touch, light, and sound.

"When people stroke Paro, Paro feels good. The whiskers are also sensors," Shibata says. As he pets the robot, it squeals — the call is a recording of a real baby harp seal that Shibata tracked down on floating sea ice near an island in Canada.

Shibata says he tried making robotic cats and dogs, but that people didn't find those convincing. "They expected too much," he says, and would compare the robot to real animals they had known.

Few people have ever seen a live baby seal, so they aren't likely to draw comparisons between the robot and the real thing. So they accept Paro as a cute little companion.

"I've kind of gotten attached to her, and I can see how people can get attached to her. I treat her like she's real," says Nancy Chila, director of nursing at the Arleigh Burke Pavilion, part of the Vinson Hall retirement community in McLean, Va.

She says the facility began testing the robot in April with about a dozen residents. "If I walk down the hall, groups of people will stop," Chila says. "They actually remember her [Paro] now when she comes out."

The community held a recent event to showcase the robot, and Virginia Long slowly came into the activity room with the help of an aide and a walker.

When a nurse put the robot on her lap, it began to quiver, and Long talked to it gently. "What are you shivering for? Are you cold?" she asked.

The robot squealed, and Long laughed. She said she used to have a cat, "but somebody stole him." Petting a seal is unusual, she said, "but a lot of people have odd animals."

This retirement community doesn't allow pets except during visits. Management is pleased to have a low-maintenance "animal" that can amuse people. Unlike a cat or dog that would have to be fed and walked and taken to the vet, the robot can simply be plugged into a charger and left alone until its needed again.

Chila says the residents know that Paro isn't a real animal. "They have said that they're aware that she's a robot, but they love her just the same."

But some experts on aging say a robot is no replacement for a real animal — one that can emotionally connect to people.

"One of the things that we've learned is that it is the unexpected and spontaneous behavior of the living creature that adds so much of the value to people's experience," says Bill Thomas, a physician and professor of aging studies at the Erickson School at the University of Maryland, Baltimore County.

He says nursing homes can accommodate live-in pets if they choose to do so. In fact, he pioneered a reform movement for eldercare called the Eden Alternative. It involves surrounding older people with lots of animals, plants, and children.

"I can say with confidence that people in that reform movement really are not looking for a robot to solve our problems," Thomas says.

Any kind of novelty can get the attention of people who are lonely and bored, but that doesn't necessarily help them live a meaningful life, he says.

"I have no doubt that I could thrill a group of older people with a fur-covered robot. I know I can," Thomas says. "But it doesn't solve anything. It doesn't solve the problem that is really causing their distress and their lack of enjoyment of life."

Watch Paro the robotic seal in action with patients at a Japanese health care facility.