Accessibility links
'Wanted' Man: A Milquetoast Gets His Burn On Walter Mitty meets Lara Croft, and then both pretend they're in The Matrix. That's Hollywood's latest hymn to hit men, a brutal but lazily plotted actioner from Russia's Timur Bekmambetov.

'Wanted' Man: A Milquetoast Gets His Burn On

'Wanted' Man: A Milquetoast Gets His Burn On 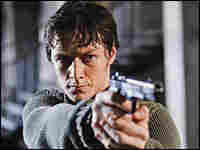 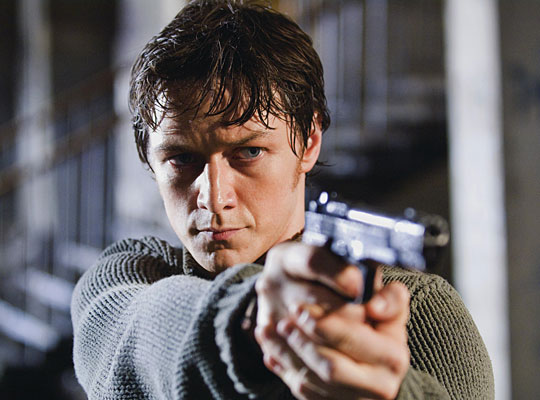 Manned up: Onetime pushover Wesley (James McAvoy) gets a new attitude in Wanted. 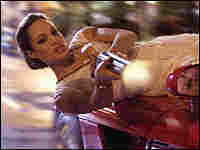 Joining Angelina Jolie and her secret band of highly trained assassins, Wes sets out to avenge his father. (Or maybe not.) Universal Pictures hide caption 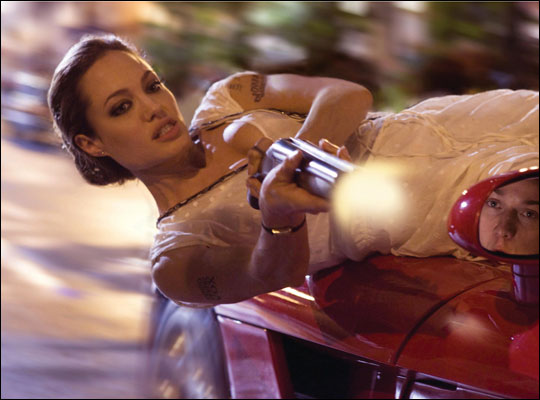 Joining Angelina Jolie and her secret band of highly trained assassins, Wes sets out to avenge his father. (Or maybe not.)

'Shoot the Wings off the Flies'

Walter Mitty meets Lara Croft, and then both pretend they're in The Matrix. That's Hollywood's latest hymn to hit men.

Wanted is well-outfitted with guns, knives and bombs, but its major artillery is director Timur Bekmambetov, who made the deliriously cyberpunky Night Watch and Day Watch. Alas, the Russian filmmaker can only do so much with his American debut's stale premise and lazy plot.

Loosely adapted from a graphic novel, Wanted recounts a kind of conversion experience in the life of an overanxious Chicago accountant (slumming Scottish actor James McAvoy).

When introduced, Wesley lacks the grit to confront either his screechy boss or his girlfriend and best buddy, who are brazenly conducting an affair. Then, suddenly, he's recruited by Fox (Angelina Jolie), a glamorous killer who informs him that his father was a member of a millennium-old clan of assassins, the Fraternity.

Wesley never met his deadly old dad, but now he's reportedly been slain, and Fraternity chief Sloan (Morgan Freeman) wants Wesley to kill the old man's killer. Fox and Sloan may not be telling the truth, however — and Wesley eventually gets another version of the story from Pekwarsky (Terence Stamp, also slumming).

A clueless office drone who quickly becomes an enlightened fighter, Wesley could be Neo's cousin. Wanted likewise borrows many of its bullet-ballet pirouettes from The Matrix, which in turn emulated the styles of such Hong Kong action maestros as John Woo and Tsui Hark.

Even at their bloodiest, though, those directors never sent their characters through the abattoir the way Wanted does. As part of his training, Wesley gets pummeled mercilessly — and the existence of the Fraternity's miraculous "recovery room" doesn't make the damage any easier to watch.

Bekmambetov sometimes shows evidence of a lighter touch, as in the scene where a furious Wesley smashes a computer keyboard and the now-detached keys spell out a taunting message as they hurtle through the air.

Too bad the director doesn't show a similar irreverence toward such inane plot devices as "the loom of fate." Night Watch and Day Watch had ludicrous elements of their own, but those movies weren't nearly as into their own nonsense as Wanted is.