After nearly 20 years, Exxon Mobil Corp. will have to pay punitive damages for the massive Valdez oil spill that devastated Alaska's Prince William Sound. But in its ruling Wednesday, the Supreme Court slashed those damages to about $500 million.

That's a fraction of what the plaintiffs — including thousands of fishermen — had hoped for. And attorneys involved in the case say the court's ruling could have implications in other lawsuits.

In March 1989, the Exxon Valdez struck a reef off the coast of Alaska. The captain, Joseph Hazelwood, had been drinking and the supertanker spilled nearly 11 million gallons of oil. It was the worst spill on record in North America.

A lower court ordered Exxon to pay $2.5 billion as punishment, but the Supreme Court knocked that amount down dramatically Wednesday. Concerned about oversized damage awards, the court said a company shouldn't pay more in punitive damages than it has already paid in compensatory damages.

"For the people who were harmed, they will recover approximately $15,000 apiece," said David Frederick, who filed a friend of the court brief in the case for the state of Alaska. He called it "a pittance compared to the devastation the oil spill wreaked on their lives."

Frederick also said the amount of punitive damages is too small to serve as a deterrent. Given the high price of oil, $500 million won't put much of a dent in a company like Exxon.

But Andy Frey, who filed a brief in the case for the American Petroleum Institute, said Exxon has already paid more than $3 billion in penalties, cleanup and compensation costs. And the oil spill took a toll on its public image.

"Making them pay more money is not likely to make them or other oil companies significantly better behaved," Frey said.

While the Supreme Court case focused on Exxon, the ruling could have implications well beyond the company, lawyers said.

Amy Wildermuth, who represents an association of fishermen along the Pacific Coast, was disappointed by the decision and said the justices were sending a message about what they see as excessive awards. She described the court's message like this: "These punitive damages are running off the rails, and we're going to rein them in."

That message is music to the ears of many businessmen. Companies often see punitive damages as a dangerous wild card.

"There's a sense of fear," says Amar Sarwal, general litigation counsel for the U.S. Chamber of Commerce, "because what's to constrain a jury from driving [a company] out of business?"

Wednesday's ruling came under federal maritime law, a small corner of the legal world. But attorneys on both sides of the case expect lawyers to begin citing the decision in other kinds of lawsuits. 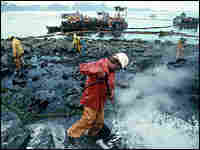 Workers clean oil-covered rocks in Alaska near the site of the Exxon Valdez oil spill in 1989. Natalie Fobes/Corbis hide caption 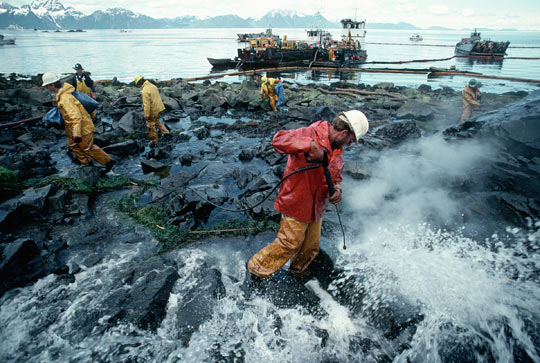 Workers clean oil-covered rocks in Alaska near the site of the Exxon Valdez oil spill in 1989.

After nearly 20 years, Exxon Mobil Corp. will have to pay punitive damages for the massive Valdez oil spill in Alaska. But in its ruling Wednesday, the Supreme Court slashed those damages to about $500 million.

The plaintiffs — fishermen, landowners and native Alaskans — had hoped for much more.

A lower court had ordered the company to pay $2.5 billion in punitive damages, but in its opinion, the Supreme Court found that amount excessive.

The high court said that under federal maritime law, punitive damages shouldn't be any larger than the compensatory damages the company had already been ordered to pay. In other words, the company shouldn't have to pay more in punishment than the actual damage it caused.

The Exxon Valdez ran aground in Alaska's Prince William Sound in March 1989, spilling 11 million gallons of oil — the largest spill on record in North America.

Exxon had asked the high court to reject the punitive damages judgment, saying it already has spent $3.4 billion in response to the accident, which fouled 1,200 miles of Alaska coastline.