Accessibility links
'Wall-E,' Speaking Volumes with Stillness and Stars Crazily inventive, deliriously engaging, emotionally true, Pixar's latest is a gratifying look back at the silent-film twilight of 70 years ago — and a cautionary look 700 years ahead, at what our silent planet's twilight might be. 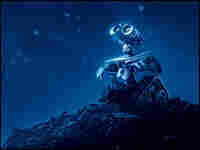 Evolutionary thinking: Wall-E may have started out as a glorified trash compactor, but he's learned how to look to the sky. Pixar hide caption 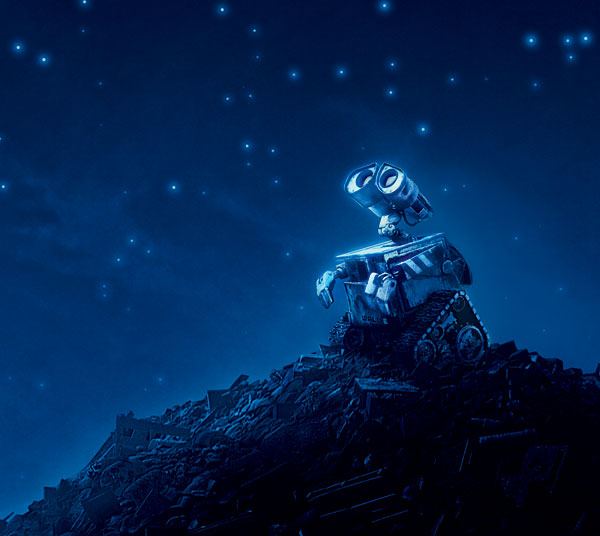 Evolutionary thinking: Wall-E may have started out as a glorified trash compactor, but he's learned how to look to the sky.

Rated G: Big-hearted and full of wonder, but too smart to be saccharine. 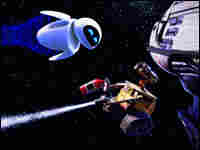 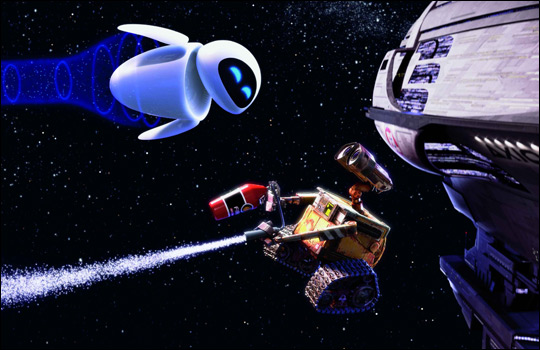 Interpersonal triangulations: In space, fire extinguishers can help keep your relationship on track.

The camera descends, at the start of Wall-E, from outer space to a landscape that looks eerily familiar — and sort of not. The sun filters down through a brownish haze. What seem at first like skyscrapers turn out to be neatly stacked mountains of trash. Stillness is everywhere, broken only by the unlikely sound of a song from Hello, Dolly! — and a solitary figure zipping around a junk-strewn cityscape.

Apparently, humans never changed course on pollution and consumerism, and sometime in the 22nd century they were forced to leave a planet they had turned into a giant garbage dump. But they left without turning off a robot they'd left behind. He's basically a trash compactor on treads — a Waste Allocation Load-Lifter: Earth Class, or WALL-E — who has, over the course of 700 years, developed a personality.

He tries to puzzle out what mankind's detritus was for (a Rubik's cube, a spork, a fire extinguisher), and he saves a few items — an alarmingly fresh 700-year-old Twinkie, say, for his pet cockroach.

But most of the trash he compacts and stacks, in a routine that is interrupted only when he falls head-over-treads for a sleek robot from the stars: EVE (for Extra-terrestrial Vegetation Evaluator), whom he watches from afar so he won't be incinerated.

Eve has an itchy trigger-finger, it turns out.

The first hour of Wall-E is a crazily inventive, deliriously engaging and almost wordless silent comedy of the sort that Charlie Chaplin and Buster Keaton used to make. Things turn more conventional in the last half hour, when pudgy, machine-dependent humans make an appearance, but the glow of that first part will carry you through.

That and the majesty of the filmmaking: Wall-E's world, in all its epic decay, looks real. You can almost taste the dust. And it's emotionally real too — enough so that a cautionary tale about the environment, and about big corporations that don't take care of it, and about getting so caught up in our gadgetry that we forget to look at the stars all take a back seat to romance.

So do some specifically cinematic subtexts. Director Andrew Stanton and his animators have slipped in nods not just to Hello, Dolly!, but to Star Wars and Blade Runner, An Inconvenient Truth and the comedies of Chaplin and Jacques Tati. More than just a nod to Chaplin, actually: Wall-E, with his workaholic scruffiness and his yearning for someone to hold hands with, might as well be Chaplin's Little Tramp.

There's actually a nice parallel between this largely silent film and Chaplin's first sound film, Modern Times. In that one, the silent clown used the soundtrack mostly for music and effects, not for speech, just as Pixar does here. Chaplin only let you hear a human voice a couple of times, and only on some sort of mechanical contraption — say a closed-circuit TV screen — to emphasize its artificiality. It was his way of saying to the sound world, "OK, everybody's doing this talking thing now, but look how much more expressive our silent world is."

For the first time in a Pixar movie, Wall-E's filmmakers give a nod to the world of actual actors and cameras — and make them artificial in the same way: by only letting you see them on video screens, where they look flat and washed-out compared to the digital world around them.

But there's one difference. Chaplin knew he had lost the battle: Silence was finished; sound had won. In today's Hollywood, digital is what's taking over — in special effects, in green-screen work, in animation. And Pixar's animators, bless them, are at the forefront, insisting that imagery created on computers doesn't have to be soulless. Wall-E's images are filled with emotion, just as silent film's images were — even though its characters look like they're made of metal and plastic, and can't say a word.

Wall-E is being sold as a futuristic fantasy, of course. But I have to say I'm just as gratified by their look back 70 years to silent movies as I am by their look forward 700 years to a silent planet.