Accessibility links
Glacier Bay Park's Gravity Shifts As Ice Melts The ice sheet in Glacier Bay National Park in Alaska has receded so much that the Earth's crust is rebounding. Alaskans who live in the area have grown used to expanding properties, brown bears — even a slight drop in gravity. 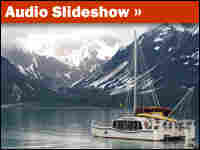 When it comes to the upward movement of the Earth's crust, the residents of tiny Gustavus, Alaska, are experts.

"Isostatic rebound is the term for it," explains Morgan DeBoer, taking a break from his sawmill. "You know, land rebounding, coming up, springing up out of the water at an inch and a half a year."

DeBoer has good reason to be up on the jargon. Over the past decades, isostatic rebound has more than doubled the size of his family's seafront property, as the rising Earth's crust lifts new real estate out of the water.

The family even went to court — the case went all the way up to the Ninth Circuit Court of Appeals — to defend their right to the new land.

"You wouldn't think it would be much," says DeBoer, "but when it's flat land to begin with, any change is significant. We gain probably an acre or so every year." With all this new acreage, the DeBoers have built themselves a nine-hole golf course.

The rising ground in Gustavus is a symptom of a more momentous event that took place in nearby Glacier Bay. When English explorer George Vancouver visited southeast Alaska in 1794, the fjord we think of today as Glacier Bay was the site of a giant sheet of ice, more than 60 miles long. There was no bay — just ice.

But over the next two centuries, something astounding happened: The ice melted, and fast. (While this is the fastest glacial retreat ever documented, it's not thought to be caused by man-made global warming.)

All that ice was very heavy; it had been pressing down on the Earth's crust like a bowling ball on a bed. So when it disappeared, the bed — the Earth's crust — sprang back up. And it's still springing up. That's isostatic uplift.

Nowhere is the phenomenon more pronounced than Russell Island, farther up Glacier Bay. About 200 years ago, the island sat under thousands of feet of ice; now it's covered with brush and trees.

The ice may be gone, but its effect is still visible: The mountain peaks framing this bay are rounded, ground down by the ice. And the beach is a jumble of gravel and small stones, left by the glaciers. Noisy birds called oystercatchers poke their long orange bills between the stones, looking for lunch.

The island also attracts scientists. A research team from Japan puts ashore in a skiff, and they lug hundred-pound batteries up the rocky shore to power their experiments on the island.

Helping them is Max Kaufman, a research technician from the Geophysical Institute at the University of Alaska Fairbanks. The batteries are necessary, Kaufman says, because the National Park bars them from bringing in a generator to power their experiments.

"It's the price we pay for doing science in the wilderness," Kaufman says, in between gasps for breath.

The batteries power something called a "gravimeter." It sits under a tent in the brush, whirring and thunking to itself. The machine is essentially a $400,000 scale: It drops a weight down a tube, while a laser measures the weight's speed. It drops the weight repeatedly, while a computer keeps track of its measurements.

The Japanese scientists want to get an exact reading of the force of gravity here on Russell Island.

As it turns out, there's nothing simple about measuring gravity.

"I study in gravity," says Tadahiro Sato, of Tohoku University. "But I do not like gravity, because gravity is complex."

But that's further complicated by the movement of other kinds of mass around the National Park: the tides, and the still-melting glaciers. It's practically impossible to calculate the exact force of gravity in Glacier Bay, Sato says. So they need the gravimeter.

And that means keeping this temperamental machine running smoothly for 48 hours — enough time for it to drop its weight 10,000 times. The researchers coax it along, ferry in recharged batteries, and nurse its computer to keep it from crashing. None of this is simple in a place as wild as Glacier Bay.

Coping With The Elements, And Animals

At one point, researcher Wenke Sun abandons the gravimeter. He comes down on the beach, looking a little nervous.

"I hear the sounds of something like people walking behind me," he says. "Maybe 50 meters behind me."

These woods contain brown bears, the coastal version of grizzlies. The bears' scat is a common sight, as are their immense paw prints, sunk deep into the soft ground. Two years ago, a bear chewed through the antenna cable on a piece of GPS equipment the researchers left here for the winter.

Later on, the scientists spot one of the brown bears in the flesh. From their boat, the Great Sea, the team sees a brown bear standing on a ridge near one of their research sites, staring at them from across the water — almost daring them to come ashore.

The captain of the Great Sea, Fritz Koschmann, lives in Gustavus. He has worked in the park for decades, so he takes brown bears in stride. But that doesn't mean he doesn't respect them. The key, he says, is to make noise and let them know you're coming.

So as the scientists load the skiff with another delivery of car batteries, and motor ashore, they are mindful of the bear nearby. They get their work done quickly and efficiently, chatting, whistling and coughing a little more than usual.

Finally, after two days of dropping a weight down a tube, Sun is able to announce preliminary results: Gravity on Russell Island is weaker than it was last year, roughly seven parts per billion weaker.

It's a tiny amount — on the order of a sperm whale losing the weight of a couple of hairs. But it's another bit of information to add to the pile, another clue to the mysterious forces at work deep inside the Earth.

And one thing has been established beyond a doubt. Glacier Bay offers its visitors guaranteed weight loss — at least, for the duration of their visit.