Accessibility links
MRIs Advised for Women at High Breast-Cancer Risk Women at particularly high risk for breast cancer should get a yearly MRI in addition to their annual mammogram, according to new recommendations from the American Cancer Society. A look at who is affected by the new guideline. 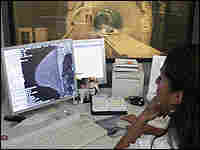 The American Cancer Society is now recommending MRI screening in addition to mammograms for women who meet at least one of the following conditions:

— have a BRCA1 or BRCA2 gene mutation

— have a relative (parent, sibling, child) with a BRCA1 or BRCA2 mutation, even if they have yet to be tested themselves

— lifetime risk of breast cancer has been scored at 20 percent to 25 percent or greater, based on one of several accepted risk assessment tools that look at family history and other factors

— have Li-Fraumeni syndrome, Cowden syndrome or Bannayan-Riley-Ruvalcaba syndrome, or may have one of these syndromes based on a history in a close relative

For some women, however, the ACS says the jury is still out on whether MRI screening is beneficial, even though they have conditions that do give them a higher-than-average risk of breast cancer. The guideline says there still isn't enough evidence to recommend for or against MRI screening in women who:

— have a 15 percent to 20 percent lifetime risk of breast cancer, based on one of several accepted risk assessment tools that look at family history and other factors

— have already had breast cancer, including ductal carcinoma in situ (DCIS)

Women at particularly high risk for breast cancer should get a yearly MRI in addition to their annual mammogram, according to new recommendations from the American Cancer Society. The revised guidelines were released Wednesday, along with a New England Journal of Medicine study reporting that MRIs are useful in one group of women who already have breast cancer.

The bottom line: Breast cancer screening guidelines remain the same for most women, says Dr. Christy Russell, chair of the American Cancer Society Breast Cancer Advisory Group. Here, she speaks with Melissa Block about who exactly is affected by the new recommendation.

We're talking about two things here. One is a study about MRIs detecting breast cancer, and then these recommendations from the American Cancer Society. Let's talk about the study first. What did the study conclude?

The study looked at women with a new diagnosis of breast cancer in one breast who had a normal physical examination and mammogram of the other breast. And when [study authors] did an MRI of the other breast, they found that about 3 percent of the women had a diagnosis of cancer by MRI that had not been detected in any other way.

So the study is saying that along with mammogram, those patients should get an MRI?

Correct, but that would now account for about 200,000 additional women per year getting a one-time MRI around the time they have their original diagnosis of cancer, before the initiation of any treatments, such as chemotherapy or radiation therapy.

At the same time, the American Cancer Society is updating its guidelines for breast cancer screening. What are you recommending?

We're recommending that for women who are really at an extraordinarily high risk of developing breast cancer in their lifetime, that in addition to annual mammography, they also have an annual MRI performed of both breasts.

When you say extraordinarily high risk, who is included in that group?

We're looking at women who are known carriers of the two breast cancer mutations that are easily testable, which are the BRCA1 and BRCA2 genes. And women who are first-degree relatives of someone with one of those gene abnormalities, but have not yet been tested. Or a woman with a significant family history, who by a breast-cancer risk model, would have a lifetime risk of somewhere between 20 and 25 percent.

You are also saying that women in these groups should still get a mammogram. Why?

Because the MRI doesn't pick up every breast cancer. It's the complement of the two that would actually give the highest pickup rate of early breast cancers. We see that calcifications or the various earliest forms of breast cancer are picked up much better on a mammogram than an MRI.

How many women would be included in these high-risk groups?

We figure there are about 70 million current women between the ages of 30 and 70, and that's really the age group of women that these screening recommendations are related to. And perhaps 1 million to 1.5 million women would fall into this high-risk group.

Are there enough MRI centers and trained radiologists to perform all of those screenings?

Probably not. But it does get to the point that not all of the 1 million women are going to be informed that they sit in this high-risk group. At this point, it does behoove us to have appropriate numbers of breast MRI centers, and that centers that exist are very high quality and eventually come under an accreditation process through the American College of Radiology.

What do you tell women about trying to make sure that the MRI is being done correctly and by a qualified center?

First of all, they need to be done at a center where the radiologist has the capability of doing an MRI-guided biopsy. Most centers can do that, a little over 50 percent, but many cannot. There's no point in having a screening MRI of the breast if something is found and you have to go to another center and start all over again. The majority of centers that have the capability of doing biopsies are high-volume centers that do at least 50 breast MRIs a month.

MRIs are quite expensive. Would these tests be covered by insurance?

Currently, most private insurers would cover breast MRIs in the screening vein for women who are known carriers of BRCA1 and BRCA2. The insurers have been following the data and trials that are now informing us on these screening recommendations and guidelines. What they're not covering for the most part are just random MRIs for women who feel they might be at high risk.

What about women on Medicare or Medicaid?

But right now, the MRI breast screening would not be covered for those women?

It's on an individual basis, at this time. Most of the women who were looked at in these clinical trials were women at a younger age, so the majority of women who you would consider doing breast MRI are not at the Medicare age. However, Medicaid would be a partner with us in trying to get MRIs available to women who do not have access through Medicaid.

One problem with MRIs is that they have a quite high rate of false positives...

That is why the recommendation is for women at very high risk of developing breast cancer. Women who know they are at high risk are willing to accept a higher rate of biopsies that turn out to be benign than women in the general population. If you have a series of biopsies based on abnormal MRI, but your risk isn't that high, the quality of life, in terms of fear and the significant costs, really outweighs any benefit in doing it — except for the population of women who are at very high risk.

Do you think these studies will be confusing to women who don't really know what their risk is?

I think it's going to be not only confusing to women, I think it's going to be confusing to the primary care physicians. Specialists have a lot more knowledge about genetic screening tools and models, and primary care providers are not necessarily following this literature. The education not only needs to be directed toward women, but toward primary care providers who will now be expected to guide their patients toward these screening models or genetic counseling before making the recommendation of screening MRI.