Accessibility links
How Art Got His Groove Back Social ties and participation in leisure activities help keep people healthy as they age. But when friends move away, or even pass away, how do you make new ones? The answer for 81-year-old Art Himmel? Karaoke.

Listen
How Art Got His Groove Back 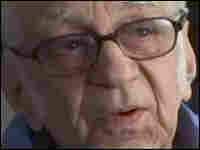 Video: 'The Art of Karaoke'
YouTube.com

Researchers know that social ties and participation in leisure activities are two predictors of good health in later life. But it can be hard to keep making friends.

For one retiree, a new hobby opened up a brand new world.

Art Himmel, 81, gets a charge out of performing karaoke. Sometimes he sings at senior centers. Sometimes, at a Los Angeles nightclub. In fact, a short documentary about Himmel's hobby is being shown at the American Film Institute's Silverdocs festival this month.

Himmel, who lives in L.A., says that at this stage in life, he and his wife have lost a lot of their longtime friends.

Some have moved away, some have died, and others have just slowed down to the point that they don't go out much.

"But when I started doing karaoke, I got new friends," he says. "But I think the nicest aspect is that they'll call if they don't see me. There's concern on their part."

Despite battling colon cancer and dealing with other disappointments in the past few years, Himmel thinks the singing and the interaction with other people keeps him going.

And researchers who study aging say there's a lot to this.

"This story of this karaoke singer really fits the pattern of what we've seen in our data," says Carlos Mendes de Leon, a researcher with the Rush Institute for Healthy Aging.

He says there's lots of evidence to suggest that being engaged in the world — with people — reduces the risk of disability and mental decline.

And a recent study from Australia finds some relationships — namely friendships — may be even more protective than ties with family when it comes to longevity.

Mendes de Leon says one explanation is that we're expected to maintain relationships with siblings and children.

"But relationships with friends may provide more positive outcomes because they are discretionary," he says.