Accessibility links
Walter Cronkite, The Nation's Narrator, Dies At 92 The longtime CBS Evening News anchor, once known as "the most trusted man in America," has died. Cronkite offered a nightly account of the world's tragedies and triumphs over the course of a generation, from the Kennedy assassination to the Vietnam War to the walk on the moon and Watergate. 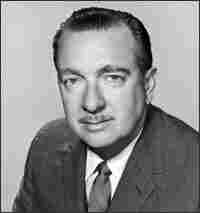 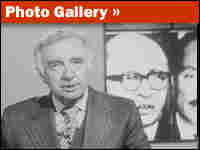 And That's The Way It Was 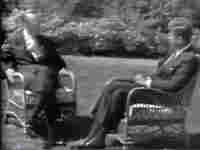 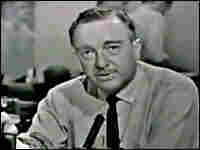 Walter Cronkite, the CBS News anchor who famously became the most trusted man in America, died Friday at the age of 92.

For nearly two decades, tens of millions of Americans tuned in to Cronkite to learn "that's the way it is" every night during a rancorous age. Although Cronkite left the anchor's desk at CBS Evening News more than a generation ago, he was still known by many as "Uncle Walter" — the ultimate reliable source, the nation's narrator and the standard by which all other TV news anchors are judged.

Nineteen months into the job, Cronkite was confronted with the horrific news of President Kennedy's assassination. He rushed to air and calmly led viewers through the tragedy with simple declarative sentences:

Cronkite briefly choked up on camera as he took off his reading glasses to check the time.

"It was a very effective moment, and it's been rerun a thousand times," said longtime friend Andy Rooney of CBS. "If Walter had had his choice, he would have suppressed those tears because he hated to reveal himself as an emotional person."

The Secret Is Credibility

Yet ultimately, Cronkite's composure and mastery throughout the day and those that followed inspired a sense of awe that persists even today.

"It's the old joke — you know, the secret in this broadcast business of broadcast news is credibility. If you can fake that, you've got it made. But Walter didn't have to fake it," said retired CBS News foreign correspondent Tom Fenton.

As a young reporter for the United Press wire service, Cronkite covered the combat of World War II up close and was later hired by Edward R Murrow for CBS.

In 1962, he became anchor of CBS Evening News and oversaw its expansion to become the nation's first half-hour nightly newscast. Cronkite loved perfecting what he called "the magic" — the six minutes a night he was on the air delivering the news — and he was endlessly polishing his copy and timing his delivery for what became the nation's top-rated newscast.

Television was newly dominant at the time, and there were few competing distractions. Yet Rooney says network executives often pushed for softer stories, as they brought entertainment values to their news divisions.

"But Walter didn't care," Rooney said. "He was absolutely in favor of giving the American people what they needed to know, not what they wanted to hear."

From the outset, Cronkite put his own editorial stamp on coverage. Fenton says Cronkite privately had been a strong supporter of American involvement in Vietnam.

"It was only after that famous trip he made to Vietnam and he saw the reality on the ground and heard what was really going on that he came to what was for him the inescapable conclusion," he said.

During a February 1968 broadcast, Cronkite said, "To say that we are closer to victory today is to believe, in the face of the evidence, the optimists who have been wrong in the past. But it is increasingly clear to this reporter that the only rational way out then will be to negotiate, not as victors, but as an honorable people who lived up to their pledge to defend democracy, and did the best they could."

Unlike the punditry that dominates today's nighttime cable news shows, Cronkite's nightly newscasts were so measured that it made his words after the Tet offensive all the more powerful.

When President Lyndon Johnson saw that newscast, he turned to his press secretary, George Christian, and famously said, "If I've lost Cronkite, I've lost the country."

The Moon Landing And Watergate

But there was good news back then, too, and Cronkite took great joy in delivering it.

"Armstrong is on the moon. Neil Armstrong, a 38-year-old American, standing on the surface of the moon this July 20th, 1969," Cronkite told the nation as Armstrong delivered his historic line: "That's one small step for man, one giant leap for mankind."

Cronkite devoted hours to the space program, but he made news again when he devoted 14 minutes of his newscast in October 1972 to a single topic — Watergate — even though President Nixon would breeze to re-election a few weeks later.

"But the episode grew steadily more sinister — no longer a caper, but the Watergate affair escalating finally into charges of a high-level campaign of political sabotage and espionage apparently unparalleled in American history," Cronkite said during the Oct. 27 show.

CBS wasn't breaking news here, but Cronkite had assembled a team of reporters to explain the affair fully to a much larger public and ensure the matter couldn't be dismissed.

Cronkite once described his approach to his job on NPR's Diane Rehm Show:

"The ethics of a responsible journalist is to put his or her biases, his or her prejudices aside in an attempt to be really fair to all sides at all times," he said. "And my pride is that I think I did that fairly well during my years."

Cronkite retired from CBS Evening News in 1981. But he expected to hold a senior role at the network during the Dan Rather era and was hurt to learn there was no room. He later did some work for NPR, Discovery Channel and the History Channel, and he devoted more time to sailing.

He re-emerged as the voice of CBS News in September 2006, if only to introduce Katie Couric when she took over as anchor. More than a generation later, Walter Cronkite's rumbling voice still echoes.