Accessibility links
The Quavers Bring 'Porch Techno' to America The New Yorker describes the Quavers as moody and enchanting. The two Brooklyn musicians describe themselves as a "space-age Carter family." They stopped by The Bryant Park Project studios to demonstrate. 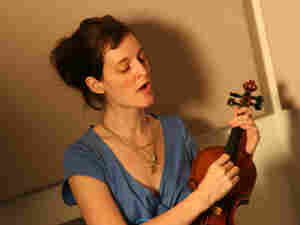 The New Yorker describes the Quavers as moody and enchanting. The two Brooklyn musicians describe themselves as a "space-age Carter family." In a generous, fluid studio session, the Quavers gave a demonstration.

Catherine McCrae brought her violin, and T. Griffin showed up with his guitar. But they also brought along a host of gadgets designed to warp and expand their music. McCrae showed off her distortion pedals, a looper and something called a "space echo."

"We've been doing this for about five years, learning how to do it and doing it," says Griffin. "We've discovered that not having a drummer has enormous benefits, especially in New York City." Drum kits are huge, and so are many of the musicians who bang away on them. Technology makes it possible to do without the extra bulk.

A slender duo, the Quavers fit into a black 1993 Saturn. They like to hit the road with their sound, which they call "porch techno" — an unusual but apt coinage. "It was a way of describing the way we want to use sort of modern, cheap, sample-y electronic stuff," Griffin says, "but also something homemade."

In the modern confines of the Bryant Park Project studio, the Quavers showed off recent songs like "Green Plastic Soldiers" and "God Made Cars," from their new record, Lit By Your Phone. McCrae says the album took shape as the duo played its way through the Midwest. "We had these skeletons of songs," she says. Back home, the duo filled out and perfected the new tracks.

McCrae has played the violin since the age of three. She started with classical training, then veered off into a teenage punk phase. "I felt like I had to sort of merge the split in my personality a little bit," she says. "And really, since I added all of these pedals and everything, it's a different instrument."

Griffin says he has played with far louder bands, but nothing beats the power of quiet. "There's something that happens when you're in a group of people where you can really feel people's attention lock," he says. That's the kind of moment the Quavers live for.

On our blog, listeners get the quivers for the Quavers.

Watch: The Quavers perform live at the BPP

Album
Lit By Your Phone
Artist
The Quavers