Accessibility links
In Cluster of Teen Pregnancies, 'Juno' Comes to Life After 17 girls from one Massachusetts school turned up pregnant, some wondered about a possible "Juno Effect." The idea is that Hollywood glamorizes teen pregnancy, and one professor says her research shows it's very real.

Listen
In Cluster of Teen Pregnancies, 'Juno' Comes to Life 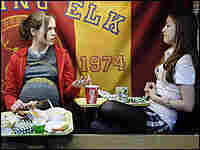 After 17 students in one Massachusetts school turned up pregnant this year, Time magazine called it the "Juno Effect." The term referenced the hit comedy Juno, about a high school girl who's unexpectedly expecting. By depicting the sunny, even redemptive side of Juno's plight, the magazine argued, Hollywood had perhaps made motherhood attractive for teens.

It's the kind of conclusion that sometimes draws criticism for being hasty. But Jane Brown, a journalism professor at the University of North Carolina at Chapel Hill, says the Juno effect is real.

Brown runs the Teen Media Project, which recently completed a study into the images seen by girls between the ages of 12 and 14. The research showed that kids who had "heavier sexual media diets" became more than twice as likely to become sexually active by the age of 16.

Part of that stems from teens' natural curiousity about sex. Kids who are more interested in it seek information from a variety of sources, Brown says, including movies like Juno. "In the context of parents still not comfortable talking with their children about sex, with schools talking only about abstinence until marriage and with religion saying it's still a sin, the media have become very powerful sex educators," she argues.

Brown says teen pregnancy rates had been falling, but she worries that the numbers are again on the rise. She says the generation of girls raised in abstinence-only education programs may not know as much about contraception as kids used to know. Meanwhile, images of unwed mothers have gone mainstream.

"This is unusual and rare that we would have movies like Juno or Knocked Up, or that we would now be glamorizing celebrities who are pregnant and we don't even know who the fathers are. ... For [girls], looking to see who's got a baby bump is really compelling somehow," Brown says.

On our blog, an open thread: Is Juno to blame?