Accessibility links
Supreme Court: Gun Ownership an Individual Right In a 5-4 vote Thursday, the U.S. Supreme Court declared for the first time that the Second Amendment to the Constitution guarantees the right of individual Americans to keep and bear arms. The court said gun ownership is an individual right, not connected with military service, and that it can be regulated in some ways.

In a 5-4 vote Thursday, the U.S. Supreme Court declared for the first time that the Second Amendment to the Constitution guarantees the right of individual Americans to keep and bear arms. The court said gun ownership is an individual right, not connected with military service, and that it can be regulated in some ways.

The Supreme Court ruling doesn't mean that anyone can now buy and own a handgun in Washington, D.C. Those who want a gun will still need to obtain a license. Read what else to expect as a result of the court's decision.

The Supreme Court's decision on the right to bear arms is the latest milestone in the long history of U.S. gun legislation. Read our selected timeline of key laws.

The decision to overturn the District of Columbia's 32-year-old ban on handguns is the Surpeme Court's first conclusive interpretation of the Second Amendment since its ratification in 1791.

This is a great moment in American history. It vindicates individual Americans all over this country who have always known that this is their freedom worth protecting.

While we disagree with the Supreme Court's ruling, which strips the citizens of the District of Columbia of a law they strongly support, the decision clearly suggests that other gun laws are entirely consistent with the Constitution.

I'm disappointed in the Court's ruling and believe introducing more handguns into the District will mean more handgun violence. 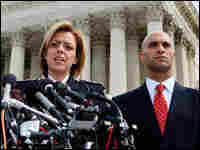 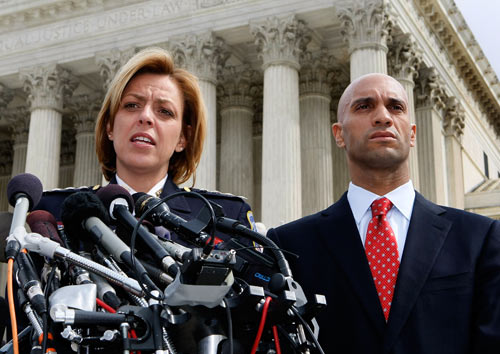 In a dramatic moment on the last day of this term, the Supreme Court declared for the first time that the Second Amendment protects an individual's right to self-defense and gun ownership.

For most of the last century, the interpretation of the Second Amendment has been that the right to bear arms is a collective right, such as with military service; Thursday's ruling says gun ownership is also an individual right.

The 5-4 ruling grows out of a Washington, D.C., case in which a security guard sued the district for prohibiting him from keeping his handgun at home. In the District of Columbia, it is a crime to carry an unregistered firearm, and the registration of handguns is prohibited. The rules are so strict, they essentially regulate handguns out of existence. The regulations were intended to curb gun violence in the capital city.

The precise meaning of the Second Amendment — "A well regulated Militia, being necessary to the security of a free State, the right of the People to keep and bear Arms, shall not be infringed" — has long been a subject for debate. In a decision nearly 70 years ago, the justices suggested it was a collective right, not an individual right to bear arms. This is the first time the court has defined the amendment so definitively.

The two sides in this case viewed the Founding Fathers' intentions very differently. The majority of the justices said the amendment protects an individual's right to possess a firearm unconnected with service in a militia and to use that firearm for lawful purposes, such as self-defense in the home. The dissenting justices said the amendment protects only the right to possess and carry a firearm in connection with militia service.

"Like most rights, the Second Amendment right is not unlimited. It is not a right to keep and carry any weapons whatsoever in any manner whatsoever and for whatever purpose," Justice Antonin Scalia wrote for the majority. But it did allow for individuals to have guns for lawful purposes, such as hunting and defending themselves, he said. The majority clearly saw the individual right to own a gun.

The ruling will leave intact many of the restrictions in place at the federal and state level, such as bans on a felon's right to keep a gun, and bans on assault weapons and sawed-off shotguns.

But Justice John Paul Stevens, in a dissent, said that the ruling leaves it to future courts to define the actual details of the right to bear arms. This should be the business of state legislatures, he said, and the court should stay out of it. Law-abiding citizens will be permitted to keep guns at home, but that doesn't address how state legislatures might want to regulate or curb gun ownership.

The court also struck down Washington's requirement that firearms be equipped with trigger locks.

In a separate dissent, Justice Stephen Breyer said, "In my view, there simply is no untouchable constitutional right guaranteed by the Second Amendment to keep loaded handguns in the house in crime-ridden urban areas."

"Today's ruling makes clear that other municipalities like Chicago that have banned handguns have infringed on the constitutional rights of Americans," he said. He also took a thinly veiled shot at the presumptive Democratic nominee, Sen. Barack Obama.

"Unlike the elitist view that believes Americans cling to guns out of bitterness, today's ruling recognizes that gun ownership is a fundamental right — sacred, just as the right to free speech and assembly."

Obama signaled his approval of the ruling in a statement Thursday.

"Today's ruling, the first clear statement on this issue in 127 years, will provide much-needed guidance to local jurisdictions across the country," he said, adding that "what works in Chicago may not work in Cheyenne," but the decision reinforced that "if we act responsibly, we can both protect the constitutional right to bear arms and keep our communities and our children safe."

Gun rights supporters hailed the decision. "I consider this the opening salvo in a step-by-step process of providing relief for law-abiding Americans everywhere that have been deprived of this freedom," said Wayne LaPierre, executive vice president of the National Rifle Association.

The NRA said it will file lawsuits in San Francisco, Chicago and several of its suburbs challenging handgun restrictions there based on Thursday's outcome.

Sen. Dianne Feinstein (D-CA), a leading gun control advocate in Congress, criticized the ruling: "I believe the people of this great country will be less safe because of it," she said.

The capital's gun law was among the nation's strictest.

Dick Anthony Heller, 66, an armed security guard, sued the district after it rejected his application to keep a handgun at his home for protection in the same Capitol Hill neighborhood as the court.

The U.S. Court of Appeals for the District of Columbia ruled in Heller's favor and struck down Washington's handgun ban, saying the Constitution guarantees Americans the right to own guns and that a total prohibition on handguns is not compatible with that right.

The issue caused a split within the Bush administration. Vice President Dick Cheney supported the appeals court ruling, but others in the administration feared it could lead to the undoing of other gun regulations, including a federal law restricting sales of machine guns. Other laws keep felons from buying guns and provide for an instant background check.

Scalia said nothing in Thursday's ruling should "cast doubt on long-standing prohibitions on the possession of firearms by felons or the mentally ill, or laws forbidding the carrying of firearms in sensitive places such as schools and government buildings."

The law adopted by Washington's city council in 1976 bars residents from owning handguns unless they had one before the law took effect. Shotguns and rifles may be kept in homes if they are registered, kept unloaded and either disassembled or equipped with trigger locks.

Opponents of the law have said it prevents residents from defending themselves. The district says no one would be prosecuted for a gun law violation in cases of self-defense.