Accessibility links
Is the Fist Bump the New High-Five? The gesture caught public attention when Michelle and Barack Obama bumped fists right before he claimed victory as the Democratic presidential nominee. While it may be new to politics, however, it's been around for years, says Youth Radio's Lauren Silverman.

Listen
Is the Fist Bump the New High-Five? 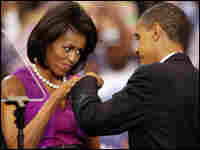 We want to hear about how you connect to people in your life. Send us an e-mail with photos of your super special handshakes and suggest a "what's the new what" from your corner of the world.

Michelle Obama claims the fist bump is the new high-five.

"It is now my signature bump, but let me tell ya, I'm not that hip. I got that from my young staff," she explained last week while co-hosting an episode of The View.

But just how fresh is the bump? We took to the streets of Oakland, Calif., to find out. Nearly every person we spoke to said that bumping fists the way the Obamas did on stage at a rally in Minnesota is something people have been doing for a long time.

"It's older than the civil rights movement, I'll put it to you like that," explained Garlin Gilchrist II, 25, co-founder of TheSuperSpade.com, a blog defined as "black thought at the highest level." Gilchrist says even though he's been giving "dap" his whole life, in one way Michelle Obama is right: The fist bump is new to presidential politics.

"It fits into Barack Obama's whole framing of this election as a changed election. Subtext is: We're changing how things are done around here ... This is a new day so this is a new high five. This is the new leadership; this is the new style."

Lauren Silverman is a commentator for Youth Radio.

Wired Magazine: How to Do the Fist Bump