Accessibility links
An Art Star Creates a Splash in New York New Yorkers woke up this morning to new landmarks in the city's harbor and along the East River: four waterfalls. They're actually a public art project, courtesy of artist Olafur Eliasson.

Listen
An Art Star Creates a Splash in New York 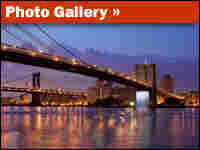 One of Eliasson's waterfalls faces the dawn under the Brooklyn Bridge. Vincent Laforet/Courtesy The New York Times hide caption 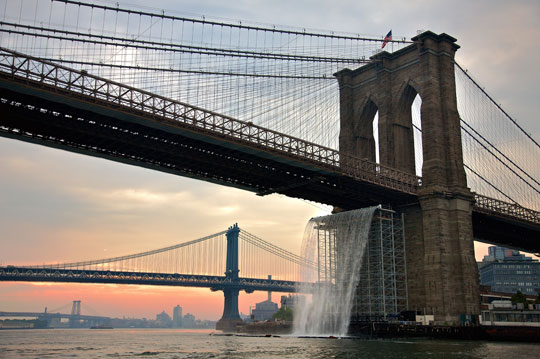 One of Eliasson's waterfalls faces the dawn under the Brooklyn Bridge.

This morning, as dawn broke, it looked as though the Brooklyn Bridge had sprung a gigantic leak: There's a 100-foot tower of scaffolding just under the roadway on the Brooklyn shore, with water cascading from the top — at a rate of around 9,000 gallons of water a minute.

There are three other waterfalls like the one under the bridge: one on the Manhattan shore on the Lower East Side, another on the Brooklyn shore near Brooklyn Heights and one on Governors Island in the middle of New York Bay.

The falls are between 80 feet and 120 feet high, and built of the same kind of scaffolding you'd see wrapped around a high-rise construction site.

At the base of each waterfall, pumps suck water out of the bay. The inlets are protected by buoys to keep boats from being sucked in, and by metal cages and filters to keep fish and the microbes they feed on from being slurped up.

The pumps pipe the water to the top, where it's dumped into intentionally leaky, oversized gutters. From there, the water cascades back down into the bay in glistening sheets, sending off a spray of mist.

The falls are the creation of the Danish-Icelandic artist Olafur Eliasson. He's a big deal in the art world right now; a retrospective of his work closes next week at the Museum of Modern Art in Manhattan.

Two days ago, he sat on an observation deck overlooking the bay, a little bleary-eyed because he'd been up all night making sure everything worked. He gestured toward the water and said the point of the project is to get New Yorkers to think about parts of the city that they usually ignore — although he said it in art-speak.

A Positive Approach to 'Negative Space'

"There's a kind of a space which we normally would consider a negative space," Eliasson said. "Because we're here in Manhattan — this is the positive block. Over there you have another city structure — that's another positive block. But in between here, there is nothing. It's taken for granted as something which is not really even there."

In other words, the East River and the New York Bay are things to be endured, not enjoyed; New Yorkers are used to passing through the tunnels below them or over the bridges above.

"This is not about the waterfalls only," Eliasson said. "This is obviously also about from where you engage with the waterfalls — the journey through the city, on a boat, on a bicycle, walking, running or however you want to look at them."

The waterfalls cost about $15 million. The money was raised mostly from private donors by a group called the Public Art Fund, which also organized the logistics.

"No one's built a waterfall before, so city agencies think, 'How do we permit this?'" she said. "And there had to be the willingness and creativity to say yes, and to want to pursue it and make it happen.

"And when there's a mandate from City Hall to pursue it and make it happen, then it happens," Freedman said.

The only comparable public art project in New York history was "The Gates," erected in Central Park in 2005 by the artists Christo and Jeanne-Claude. Katy Siegel, who teaches art history at Hunter College of the City University of New York, says the mayor's support for Eliasson's waterfalls was informed by the success of "The Gates."

"Michael Bloomberg understands that art is good business," Siegel says. "'The Gates' was an enormous success — probably the biggest, most successful public-art project ever in terms of sheer economics and tourism. The question is, will this drum up that kind of business?"

Siegel isn't so sure that it will. She says the New York waterfront isn't very pretty — certainly not as inviting as Central Park.

She also worries that the focus on tourism will dilute the impact of the waterfalls; that they'll be seen as a spectacle, rather than the sublime evocation of nature that Eliasson seems to want.

"He didn't want lights, originally, and they are putting electric lights on them," Siegel said. "And I think that's something he's probably afraid of — that it'll just be turned into the equivalent of a laser-light show at a Pink Floyd concert."

The waterfalls will be in operation through mid-October. A limited number of free tickets will be available every day for a boat tour of all four; anyone who misses out on the free ride can pay $10.

'Waterfalls' on the Web