Accessibility links
Leroy Anderson: Master of the Miniature The Boston-based composer is remembered, 100 years after his birth, for a string of three-minute pops-concert classics such as "Sleigh Ride," "The Typewriter" and "The Syncopated Clock." 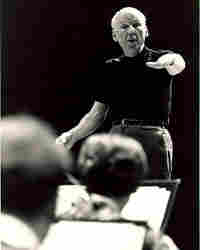 Leroy Anderson conducts the orchestra in a recording session of his own music in 1962. Courtesy of the artist hide caption 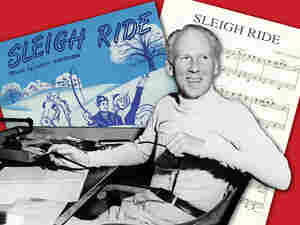 Leroy Anderson (1908-1975) built a career by composing sophisticated short works for orchestra such as "Sleigh Ride" and "The Typewriter." Courtesy of the artist hide caption

American composer Leroy Anderson was born 100 years ago Sunday. His pop classical pieces such as "The Typewriter" and "Bugler's Holiday" are favorites around the world, and this year there are tribute concerts from Ecuador to Sweden, as well as a new series of CDs on the Naxos label documenting his complete orchestral works.

Even if Anderson's name doesn't ring a bell, his music surely will: His "Sleigh Ride" is a Christmas fixture as commonplace as a snowflake pasted on a window. Another Anderson favorite, "The Syncopated Clock," was composed in 1945 when he was a military intelligence officer. CBS TV adapted it in the 1950s as the theme for its original Late Show.

The Sound of the Keys

Anderson's "The Typewriter," a pops-concert staple composed in 1950, actually features a manual typewriter on the stage with the orchestra. In a 1970 interview, Anderson described how he made the typing sound a part of the music, not just an added effect.

Leonard Slatkin, conductor of the new Anderson CDs, has played a few typewriters himself on the concert stage and says it's hard.

"You have to tamp down all the middle keys so that only the two outside ones work. And you have to start with your right hand in order to be able to hit the carriage return where Anderson specifies."

Anderson's music has been a favorite of Slatkin's for years. The departing music director of the National Symphony Orchestra is known for presenting concerts of both challenging contemporary music and popular American composers. He points out that Anderson's music has always been popular.

"We've gotten to the point where the nature of the pops concert has changed so dramatically over the last 25 or 30 years that we've forgotten that there were masters of the art of writing the short miniature specifically for this occasion."

"Jazz Pizzicato," a minute and a half of energetic plucking, was Anderson's first composition, and it made its debut with conductor Arthur Fiedler and the Boston Pops in 1938.

Anderson spent most of his life in the Boston area. He grew up in a family of Swedish immigrants who played music together. He said he got his education, from grade school to graduate school, on one street: Broadway in Cambridge, Mass.

"The Harvard Yard was on one side and the graduate school was on the other side, by the law school. I went mostly to the music building, but I've often thought that if I'd walked a few steps longer, further down, I'd have been a lawyer."

Anderson almost decided against a career in music, despite his studies in composition with Walter Piston at Harvard. He was set to take a job as a language instructor — he was fluent in languages, including Icelandic and Old Norse — but his arrangements as director of the Harvard band caught the ear of Fiedler, who encouraged him to compose. Anderson created his music at home, in his head, according to his widow, Eleanor.

"He said he didn't like to play the piano at the beginning," she recalls, "because your fingers tend to fall into familiar patterns, and it was only after the basic elements of the piece were in place in his head that he would go to the piano and use that."

A Mind on Music

Anderson was so much in his head that his son Rolf describes him as "pacing" through the house after dinner, unaware of everything around him.

"I remember once I was reading something interesting in a book, and as he walked through the living room, I said, 'Dad, you'll never believe what it says here in this book. It says ...' And then I looked up, and he had left the room. He really had never heard me at all, and that made it very clear to me that there was no point in trying to talk to him at this time of the day. He was busy thinking of music."

He was busy. Anderson composed more than 200 pieces, including a concerto and a Broadway musical called Goldilocks. In 1952, Billboard magazine named Anderson's instrumental "Blue Tango" as the year's top-selling single.

It was both a parody of Latin torch songs and a passionate example of one at the same time. That ability to transform and preserve classic structures has endeared Anderson to musicians such as Slatkin.

"You know, I've always thought of this music as being as sophisticated as any of the so-called big names that we do; it's just that he did it in miniature. So is it any different when a short Leroy Anderson piece parodies, or tries to pay homage to, a dance form like the saraband? Is that any different, really, than Mozart , who would poke fun at the same form, or Brahms or Schubert or Mahler? I don't think so."