Accessibility links
Norman Bates: A Most Terrifying Mama's Boy He was like the boy next door — if the boy next door never left his house and took up taxidermy as a hobby. For millions, Psycho's soft-spoken innkeeper made showering a dreaded experience. 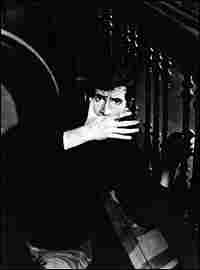 The boy next door: Norman Bates in Alfred Hitchcock's Psycho. It was the off-kilter charm of actor Anthony Perkins, then 28, that sold screenwriter Joseph Stefano on the project. Paramount Pictures/Getty Images hide caption 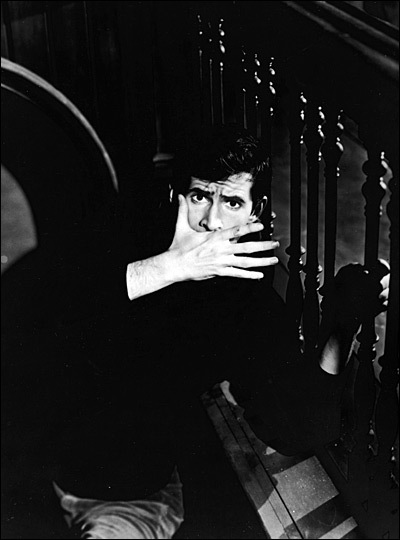 The boy next door: Norman Bates in Alfred Hitchcock's Psycho. It was the off-kilter charm of actor Anthony Perkins, then 28, that sold screenwriter Joseph Stefano on the project.

Note: These scenes are classic horror and may not be suitable for all ages.

'Death and the Detective' 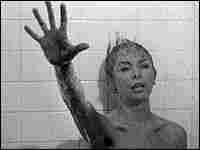 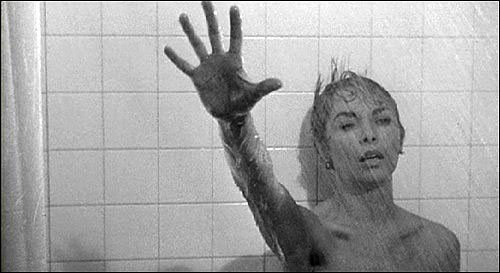 What Makes Norman Tick? Weigh In: The 'In Character' Blog 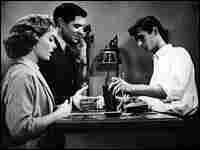 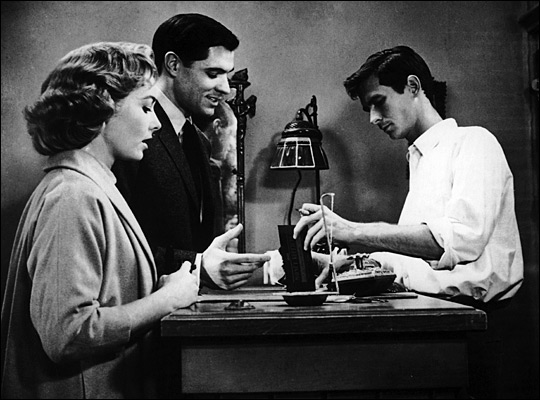 Norman's situation gets iffy when his victim's lover (John Gavin) and sister (Vera Miles) come looking for her. 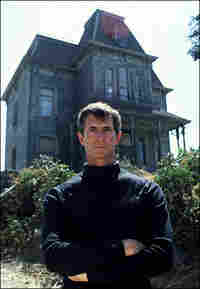 Haunted figure: Though he was a subtle, gifted actor, Perkins never managed to escape the character of Norman Bates, reprising the role in three sequels. The last was released when he was 58. Douglas Kirkland/Corbis hide caption 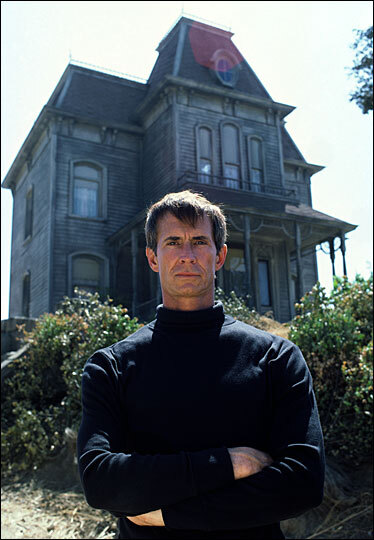 Haunted figure: Though he was a subtle, gifted actor, Perkins never managed to escape the character of Norman Bates, reprising the role in three sequels. The last was released when he was 58.

Before Freddy Krueger, before Halloween, before Silence of the Lambs, there was Norman Bates in Alfred Hitchcock's 1960 classic, Psycho.

He was the boy next door, a motel manager slash transvestite slash serial killer — with emphasis on the slash.

Oh, and yes, he mummified his mother.

Just a third of the way into the movie, Hitchcock has Norman — dressed as his mother — pull back the shower curtain and cut poor Marion Crane to bits in room No. 1 at the Bates Motel.

Chocolate syrup proved to be the right stand-in for blood — it's a black-and-white movie, remember?

But the moment is remembered as much for the slashing strings of composer Bernard Hermann as for its gore — surprising, when you think that originally Hitchcock didn't even want any musical accompaniment to the shower scene.

And the sound of the stabbing? That was a knife being plunged into a casaba melon. Sound-effects artists tried cantaloupe and watermelon, but only the casaba could satisfy the director.

Before the action was over, Hitchcock had ruined showering for a generation.

Psycho was made fast and cheap — Hitchcock used his TV crew — and it scared the pants off audiences in 1960. The inspiration for Norman Bates goes back a few years earlier, according to Stephen Rebello, the author of Alfred Hitchcock and The Making of Psycho.

From A True Story, A Memorable Hollywood Thriller

Rebello says that in November 1957, authorities in rural Plainfield, Wis., were looking for a woman, a hardware-store owner, who had gone missing. Following a clue, they entered the darkened, ramshackle farmhouse of a seemingly harmless 51-year-old handyman named Ed Gein.

"They found this particular woman," says Rebello, "She had been unfortunately tortured and dressed out like a steer. ... And the house was kind of a charnel house of decomposing body parts, skull heads line up on shelves."

Living just 40 miles away was a well-respected suspense writer named Robert Bloch, who read about Gein in the newspapers and became fascinated. He decided to fictionalize Gein's story, and his novel, Psycho, was published two years later.

It tells the tale of a schizophrenic man who — years after his father dies — has murdered his demanding and controlling mother and her lover. And he continues to murder — not as himself, but in character, as his mother.

Hitchcock read a review of the book and was hooked. After he acquired the rights to Psycho, he eventually turned to a young screenwriter named Joseph Stefano.

It didn't hurt that Stefano was in Freudian analysis at the time. But there was a problem: The screenwriter didn't like how the novelist had portrayed Norman in his book: a middle-aged, pudgy mama's boy, obsessed with Nazis.

But Hitchcock had that covered.

"Hitchcock floored [Stefano]," Rebello says. "He said, 'Don't worry about that, dear boy. How would you feel if Norman were played by Anthony Perkins?' Well, that was a whole another world.

"Perkins was in his late '20s, good-looking, elfin, strange," Rebello continues. "He was being groomed as the next James Dean. And that excited Stefano immediately. He sort of looked at Hitchcock and said, 'Now we're talking.' "

Making the killer appealing was the key to the film, says Rebello — not least because star Janet Leigh is eliminated so early on.

Tony Perkins was a bit of a teen heartthrob at the time, but he also had experience playing intense characters, including baseball player Jimmy Piersall, who has a mental breakdown in the film Fear Strikes Out.

That nervous energy surfaces not far into Psycho, when Norman prepares an awkward dinner at the motel for the soon-to-be dispatched Marion Crane. He hems and haws, stutters and stammers as he tries to make conversation with the attractive Marion.

Turns out that several of these idiosyncrasies were Perkins' idea — including having the killer pop pieces of candy corn into his mouth when he gets nervous.

According to biographer Ronald Bergan, author of Anthony Perkins: A Haunted Life, in many ways the actor was born to play the part.

"It's a weird coincidence that Joseph Stefano, the screenwriter, knew nothing about Tony Perkins' life, and yet he wrote that Norman Bates had lost his father at 5, had a very domineering mother," Bergan says. "And that's exactly what happened to Tony Perkins."

There was at least one other confluence that made Perkins perfect for the part, according to Bergan. Both men had hidden lives they wanted to keep secret: Norman's as a serial killer, Perkins' as a gay man in the 1950s.

"And I think that fear of being discovered was a terrible fear for Tony Perkins. Not only did he think Norman Bates would destroy his career. But, obviously, if he was exposed as a gay man ... "

Perkins never did shake Norman. By the time he died, in 1992, he had appeared in three unremarkable sequels to Psycho.

But why can't we shake Norman Bates either?

Dr. Justin Frank has a few notions. He's a psychiatrist who lectures on film. And he wouldn't mind getting Norman Bates on his couch — as long as it was in a well-guarded institution.

Analyzing Norman: Mother Issues, With A Side Of Rage

"I would probably work with his hatred of this mother and his rage at being abandoned," Frank says. "And then I would work very intensively with how every single session, at the end of each session, he would probably feel like killing me — because he can't stand to have anybody turn their back on him."

Near the end of Psycho, a psychiatrist explains what happened to Norman: that he had murdered his mother and her lover years earlier, after feeling abandoned by her. That, over the years, his personality had become shared with hers. That the mother half would kill those who threatened to come between mother and son — and that now Mother had taken over Norman's mind completely, and probably forever.

Frank thinks the screenwriter and director portrayed Norman's paranoid schizophrenic condition accurately — and that, considering the state of psychiatry almost 50 years ago, the therapist in the film is correct in his analysis.

With one exception, that is: Frank doesn't think Norman's condition has to be permanent.

"He's an interesting guy who essentially substitutes the pain of loss and grieving with becoming the other person. So one way to manage loss is you totally take on the characteristics and the behavior of the person who is dead.

"But I think that if you got him on an analytic couch, you would begin to see breakthroughs between those two partial people. I don't think he is irretrievably lost, the way it was presented."

Psycho's brilliant final scene shows Norman huddled alone, locked in a room at the county courthouse. His mind has been completely taken over by Mother, and he speaks to himself in her creepy voice, saying that she would never harm anyone, that she wouldn't even harm the fly that is buzzing on her hand.

Norman/Mother then smiles, looks up at the camera — and for just the merest instant, the mummified skull of Mother is superimposed on Norman's face.

Then that fades into a shot of Marion Crane's car being dredged from the swamp behind the Bates Motel.

Critics have found Norman Bates' legacy in brainy, charming, psychotic killers like Hannibal Lecter in Silence of the Lambs. Someone we'd maybe like to hang out with — except for the killing part.

But it's just that killing part, says Justin Frank, that makes us love Norman Bates, at least up there on the movie screen.

"People are excited by people who don't just yell, 'Kill the umpire!' but actually do kill the umpire. And I think there's something about that that makes him enduring also."