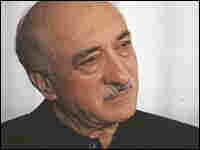 Fethullah Gulen, a Turkish religious scholar, is known for reaching out to people of many faiths. fgulen.com hide caption

Time has its Person of the Year. People has its Sexiest Man Alive. Not to be outdone, Foreign Policy magazine has just completed its online survey of the world's top public intellectuals.

No. 1 on the list is Fethullah Gulen, a Muslim religious leader from Turkey. In fact, the top 10 of the leading 20 are all Muslim thinkers from countries with dominant Muslim populations.

That's not a coincidence, says Kate Palmer, a Foreign Policy editor. In addition to being highly subjective, the survey generated a competition fueled by legions of supporters and, in some cases, by the intellectuals themselves.

Gulen is closely associated with the Turkish daily newspaper, Zaman, which mentioned the poll on its front page in May. Within hours, his supporters were voting and waging a vigorous campaign online and through word of mouth. Foreign Policy notes that Gulen, who is considered by many to be a moderate Islamist, is controversial in Turkey because he's still seen as a threat to Turkish secularism.

Gulen has a global network of followers. Foreign Policy editors think that once Gulen's supporters cast their votes for him, they stuck around on the site and then voted for other Muslim thinkers. Still, says Palmer, Gulen garnered many more votes than the second intellectual on the list, Muhammad Yunus, whose efforts to promote microfinancing won him the Nobel Prize two years ago.

Palmer thinks that many upwardly mobile, educated Muslims may have seen the poll as a real opportunity for recognition. "Maybe it's an enthusiasm for being included in this list, when many of these people are ignored by so many in other parts of the world," she says.