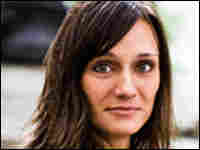 MATT MARTINEZ: We interrupt the BPP's regularly scheduled programming to bring you this breaking news. Rachel Martin is leaving the Bryant Park Project.

MARTINEZ: I'm Matt Martinez in New York. We'll return to regularly scheduled programming in just a minute. Today is Rachel Martin's last day here at The Bryant Park Project. She is moving to ABC News. We've obtained exclusive audio of how Rachel told NPR management she would be leaving.

MARTINEZ: Actually, we should clarify. She scribbled out her resignation in front of NPR bigwigs, crumbled it into a ball and threw it at them, saying...

MARTIN: (As Tom Francis) (Shouting) You are all pieces of garbage! You don't care about each other! You don't deserve each other!

MARTINEZ: OK, Rachel. We kid. Because that's what we do here at the BPP.

MARTINEZ: We kid constantly. And Rachel, isn't that what friends are for?

(Soundbite of song "That's What Friends Are For")

MARTINEZ: It really is. That's what real friends are for.

MARTIN: You are going to make me cry on the radio!

MARTINEZ: Rachel, you are sailing into the BPP sunset on a ship heading to Washington, D.C., where you'll be a correspondent for ABC News, and.

MARTINEZ: Yeah, and I. And I think I can speak for the entire staff, Rachel, when I say we're going to miss many, many things about you. But what we'll miss the most is the way that you sing your scripts.

MARTIN: (Singing) Because he is a genius!

MARTINEZ: Yes. Yes. We're going to miss that a lot. And we'll especially miss learning about all of the wonderful things that you did on the weekend.

MARTIN: Do you know what I did over the weekend?

ALISON STEWART: What was that?

MARTIN: I had a little sports respite.

MARTIN: I had my long underwear all laid out, snow boots ready.

PESCA: What are you talking about?

MARTIN: I'm going to talk about South Carolina, because that's where I was over the weekend.

MARTIN: I stayed up a little bit late and watched the new "Price is Right" with Drew Carey.

MARTIN: Yesterday, I thought, OK, the grocery store clearly has to be emptied out by 5:30...

MARTIN: Everyone will be home by then, and I can go in and get my guacamole supplies.

MARTINEZ: Rachel should point out, guacamole supplies, that's basically avocadoes, you know, for those...

MARTIN: It's garlic and lemon juice and...

MARTINEZ: Yeah. So we have a very special goodbye from somebody on the line all the way from upstate New York. Miss Alison Stewart here to offer you TV tips. Hi, Alison.

STEWART: First of all, congratulations. You're going to one of the best newsrooms ever. ABC News is awesome.

To quote you when you're singing your scripts.

STEWART: First of all, just a couple of tips. If the cameraman says to you, hey, I want to get that great mountain in the shot, so he gets his camera really low and shoots up, put your foot down, no. You'll be all nostrils and butt in the shot.

STEWART: Just beware. Make friends with your cameraman, best guy ever. You can really tell a story in just two minutes. I know it's going to be a hard adjustment, but you can. You honestly, honestly can.

MARTIN: The power of haiku.

STEWART: Exactly. News haiku. And finally, like I said, it's one of the best newsrooms out there. It's super, super competitive, but don't let that intimidate you. Find a mentor and just dive in. You're going to do great.

MARTIN: I appreciate it.

MARTINEZ: And Rachel, we here at the BPP know your love of all things, Neil Diamond, Especially his performance in the 1980 film, "The Jazz Singer." Let's hear you muse on that.

MARTIN: I had to kind of grow up, become a teenager, before people told me you can't be a cantor when you grow up, Rachel.

MARTIN: You're not Jewish and you're not a man. I was so obsessed with Neil Diamond in that movie and all of his music. So I'm super psyched!

STEWART: I know somebody I'm going to karaoke with.

MARTINEZ: And karaoke is indeed how we are - you are being feted tonight. So for all the people who are unable to be with you at the karaoke bar tonight, we decided to combine the two things you love, Neil Diamond and karaoke.

MARTINEZ: So Rachel, we'll miss you. We love you. Best of luck in Washington. It's always hard to say goodbye, and it can get sappy really fast. So, we have the BPP staff to help you - sing you out on your last day here. So - and I would like to invite all those listening at home or in the car or on the computer machines, join in, "Forever in Blue Jeans," by Mr. Neil Diamond.

Mr. NEIL DIAMOND and THE BPP TEAM: (Singing) Money talks, But it don't sing and dance, And it don't walk. And long as I can have you, Here with me, I'd much rather be...

Mr. NEIL DIAMOND and THE BPP TEAM: (Singing) Honey is sweet, But it ain't nothin' next to baby's treat. And if you pardon me, I'd like to say, We'll do OK, Forever in blue jeans.

MARTINEZ: Thanks, yeah. Thank you very much.

Mr. NEIL DIAMOND and THE BPP TEAM: (Singing) Maybe tonight, Maybe tonight, by the fire, All alone you and I. Nothing around, But the sound of my heart, And your sighs.

DAN PASHMAN: Modulate up a chord!

Mr. NEIL DIAMOND and THE BPP TEAM: (Singing) But it can't sing and dance, And it can't walk. And long as I can have you, Here with me, I'd much rather be, Forever in blue jeans, babe.

PASHMAN: Mike is in severe pain.

MARTIN: You guys are so awesome! I'm so impressed.

MARTINEZ: Really? Did that actually impress you?

MARTIN: Good warm up. Good warm up! I don't want to crush your souls before karaoke tonight, so I'm trying to give positive affirmation.

MARTIN: We're going to do it again tonight. I'm not kidding. We're totally doing that.

MARTINEZ: You're going to do "Forever in Blue Jeans"? Rachel, you know, I'm feeling under the weather. You know this?

MARTIN: Yeah, I heard a rumor of that. That is such a lame excuse. It is...

MARTIN: Don't even tell me you're not coming to karaoke! I am dead serious.

PESCA: Via sea, via plane, or by the air, you're coming to karaoke.

PESCA: Well, Rachel, after we get off the air tonight, or today, I have a special treat for you. It's all - or both - the fruits you like. I know you will only eat the un-sweet citrus fruits.

PESCA: And the berries or cherries and not the melons. So we have a big spread for you.

PESCA: I want to honor you any way I can. Yeah, I know you hate fruit.

PESCA: I got you the only fruits you said - to quote the transcript...

PESCA: You also like granny smith apples that are very, very crisp.

PESCA: You said that on the air.

PESCA: Rachel, it has been great. I did not sing because I hate Neil Diamond...

PESCA: But I love you more than I hate Neil Diamond, so - or at least that song. But it's been great working with you.

MARTIN: You guys are the best thing on radio. Thank you very much for letting me be part of it.

MARTIN: This does it for this hour of The Bryant Park Project. I'm Rachel Martin.

PESCA: And I'm Mike Pesca. And we are online all the time, albeit without Rachel Martin from now on, npr.org/bryantpark. Bye-bye.