Accessibility links
Health Clinic Treats Germany's Few Uninsured Only .2 percent of Germany's legal residents are uninsured, compared with nearly 18 percent of Americans who have no coverage. Many clinics for the uninsured in the U.S. can't meet the demand of people in need of free care. But it's a different story in Germany. 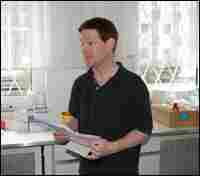 American Michael Davis gets a referral for an echocardiogram and other tests from Breker. His care at the clinic is free. Meghan Collins Sullivan/NPR hide caption 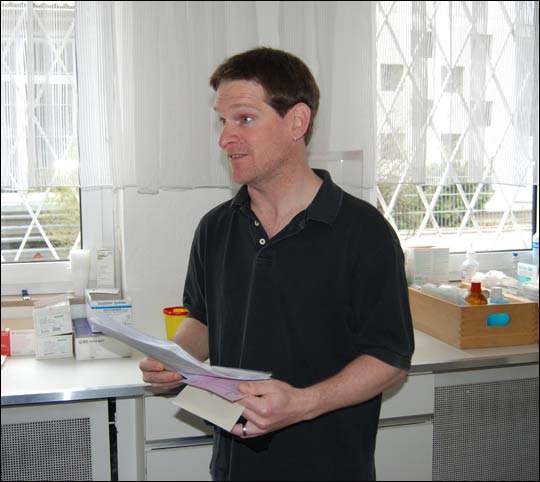 American Michael Davis gets a referral for an echocardiogram and other tests from Breker. His care at the clinic is free.

The United States spends on average $6,402 per person annually on medical care. France spends about half that — while providing better maternity benefits and complete coverage for people with conditions such as diabetes and cancer. Compare the systems.

Dr. Breker has created a small pharmacy in his office in an effort to provide free drugs to some patients. His collection consists mostly of free samples from pharmaceutical companies given to his doctor friends around Cologne. Meghan Collins Sullivan/NPR hide caption 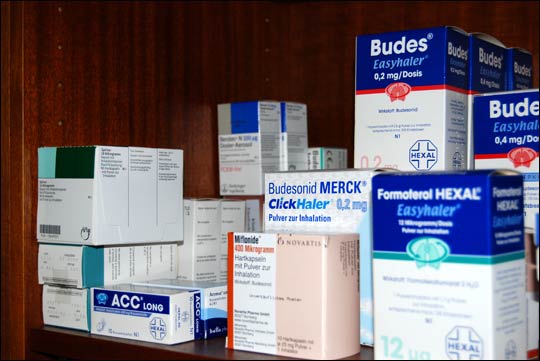 Dr. Breker has created a small pharmacy in his office in an effort to provide free drugs to some patients. His collection consists mostly of free samples from pharmaceutical companies given to his doctor friends around Cologne. 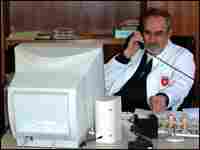 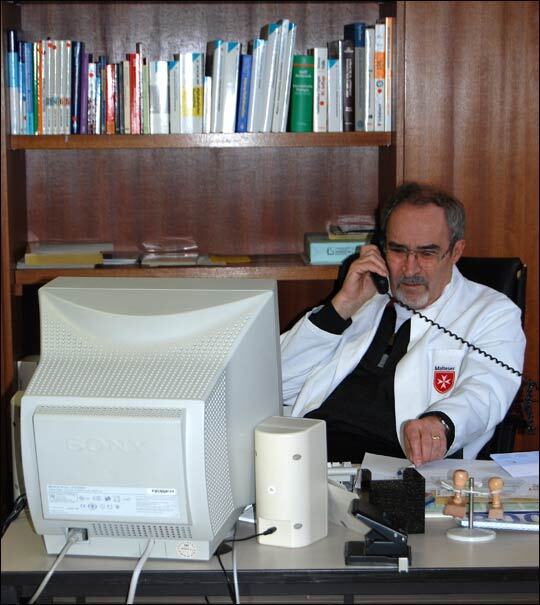 In Germany, almost everyone has access to heath care coverage.

Only 0.2 percent of legal German residents are uninsured, compared with nearly 18 percent of Americans.

Many clinics for the uninsured in the United States can't meet the demand of people in need of free care. But it's a different story in Germany, where there are very few clinics — eight in the entire country — that serve in this capacity.

Struggling with Demand in the U.S.

Someone who is uninsured in Washington, D.C., could try to get an appointment at La Clinica del Pueblo in Columbia Heights.

There are four doctors. It's open 8:30 a.m. to 5 p.m. five days a week — and stays open late on Wednesdays. But it's always fully booked.

"At our busiest days we have 50 or 60 patients coming through. The waiting room is often packed," says Dr. Meredith Josephs, the director of the clinic. She says that only a quarter of people who walk into the clinic without an appointment get seen.

"We are still unfortunately turning folks away," Josephs says.

"It's definitely emotionally difficult sometimes," she says. "I sort of try and live life sort of focusing on the ones that I can help and I'm kind of cold-hearted to the others, because if I were to spend my time trying to figure out how to serve all the people who can't get in the door, I think I would just go crazy."

Josephs isn't alone. There are 10 free clinics like this in Washington, D.C., dedicated to caring for uninsured patients — and thousands more across the United States.

Serving Patients Across the Ocean

The story is very different in Germany, where there are only eight free clinics for the uninsured in the whole country.

Dr. Herbert Breker is beginning his day at the Malteser Clinic for the uninsured in Cologne. This is a small, three-room clinic — a tiny office, exam room and waiting area attached to a private charity hospital.

It's 9 a.m. Breker looks out the window and checks the waiting room for patients. But no one is coming. So, he sits at his desk, makes some calls and gets some paperwork done.

About 15 minutes later, his first patient shows up. It's a middle-aged man suffering from vertigo. He's one of only two German citizens who come into the clinic this day. That's because almost all Germans have health insurance.

Breker sends the man home with a referral to get additional tests — then has some more downtime before other patients arrive.

"I take a quick look to see if somebody arrived meanwhile and I see that it's empty. I'll look out the windows. And I don't see anybody, so no nobody is coming," Breker says as he checks the waiting room.

Breker pours himself a cup of coffee. He explains why the man is uninsured.

All Germans, he says, can get medical insurance through their employers. This man didn't qualify — he was self-employed. For a while he bought insurance on his own, then as he got older it became too expensive.

Breker tells us that kind of problem won't last much longer: Germany has passed a law that will get people in that situation covered by health insurance. It will take effect next January.

Breker says people who have no insurance in Germany are usually living in the country illegally. That's who most of his patients are.

He reads through a log of recent patients. In addition to the occasional German patient, most are from other places — Turkey, Romania, Morocco, Bosnia, Poland, Costa Rica and Nigeria.

Late in the afternoon on one particular day, two people show up at once. A Romanian woman pleads for medicine for her husband. And a frantic American walks in.

Breker greets him at the door. The patient, Michael Davis, has a cardiac condition — and is uninsured. He's nervous that Breker will turn him away.

Davis, 35, says he suffered a massive heart attack in Germany last summer — while on vacation. He spent a couple of weeks in the hospital. They told him he would have to have bypass surgery. He flew back to the U.S. and saw a cardiologist.

"The cardiologist said right then and there we must admit you; if we let you leave, liability-wise we could be in serious trouble because we just know that you are a walking time bomb," Davis says.

So he had the surgery right away, but he didn't have insurance. His employer didn't offer coverage for part-time workers like him.

"I was never offered to get any kind of health care," he says. "Whether I even pay into it or whether it was supplemental."

Davis says he is still dealing with more than $50,000 in bills from his heart attack in Germany and bypass surgery in the U.S.

"Medicaid's supposed to cover the hospitalization and the bypass from the United States, but Medicaid's saying I made too much money even though I didn't work from April to September," he says. "I've gone through so much of an ordeal because of it."

Davis is now living in Germany, and he hopes to get a job and get married to his German partner soon. Then he'll have health care coverage. But those bills won't go away.

Breker examines Davis, then sends him for additional tests.

"Look, what I tried to do, I referred you to the service of this hospital. They'll give you an appointment for an echocardiogram, it's just an EKG, which I think is very important to see how much your left ventricle is damaged," he says.

Davis' shoulders drop, and he leans against the counter when the exam ends. You can see him relax.

"I wasn't expecting to be treated like this let alone to get such immediate care as quickly as this occurred. I'm actually shocked right now," he says.

A World of Difference

At 2 p.m. Breker closes up shop for the day.

"That's about time we close now. We close," Breker exclaims.

So, by the end of the day, Breker has seen eight patients and given them treatment, medicine and referrals to the specialists they need. It's a situation Josephs at La Clinica Del Pueblo in Washington can hardly imagine.

"Wow, that's amazing. I wish I could say it were the same here," she says. "It's a different experience."

Josephs says it's not easy to get health care in the U.S. if you don't have insurance. It means long waits — and a lot of barriers.