Accessibility links
The Wilders: Weaving an Epic Murder Ballad After serving on the jury for a murder case, singer Phil Wade was inspired to write a five-part suite that anchored The Wilders' latest album, Someone's Got to Pay. Wade and Ike Sheldon discuss the origins of the story.

Sittin' on a Jury: The Verdict 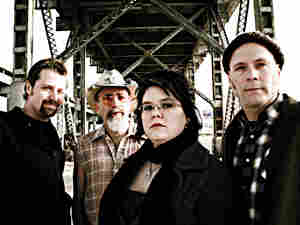 The Wilders' latest album, Someone's Got to Pay, was inspired by a murder case singer Phil Wade heard while serving on a jury. Michael Forester hide caption

It seems like a typical grisly tale: A couple fall in love and marry. The marriage breaks apart, and she moves out. He finds her and then, with her sister watching, he shoots her for rejecting his love. He loved her, killed her and will pay for that the rest of his life.

While that may sound like some kind of old country ballad, it was a story Phil Wade heard as he sat in a jury during a murder trial in November 2005. When the case was over, Wade — who plays the slide guitar, banjo and mandolin for The Wilders — wrote a five-movement suite called Sittin' on a Jury, inspired by the events. That suite anchors the band's new album, Someone's Got to Pay.

Wade, along with fellow band member Ike Sheldon, joined Weekend Edition Saturday's Scott Simon from KUAZ in Tuscon, Ariz., to talk about the origins of the album.

"It was fascinating and emotionally devastating," Wade says. "Having liked criminal-justice dramas and reading books and seeing movies like a lot of people do, no amount of preparation could've got me ready for hearing the real facts of someone murdering someone else. He was a real person who suffered a loss and just did this really stupid thing."

Wade says he was inspired by the story while he was still serving on the jury. "I think I would like to have thought that I let it sit for a while, and then the song came to me," he says. "However, I made a notation after one of the days of testimony saying, 'Maybe I'll get a song out of this someday.' So apparently, while I was sitting on the jury, I was thinking about how I was gonna mine it for information later."

A song, Wade thought, seemed to be the perfect way to capture the experience of a trial and its various parts. "If you think of each verse of the song as being part of the trial — [the] introduction to the trial where you're told what you're going to be doing as a juror, then the prosecution, the defense, the closing statements and deliberation, and then the verdict — that sort of lends itself to a verse-chorus structure, which is how I wrote the song," he says.

Too Much to Go Around

While working on music for the new record, Wade brought the suite to his group, The Wilders. "I had it written, but the only problem was it was nine minutes long," he says.

Eventually, they decided that it would be best to split up the songs. "Phil and I talked about this idea: 'Let's split this up into completely different musical ideas for each verse,'" Sheldon says.

At the end of every day of recording, the band recorded a different verse, often playing whatever instrument its members felt was right.

"It was very exciting for us, because it was like a treat at the end of every day," Sheldon says. "At the end of the day, you get to just sit down and see what happens. We would never go through it more than once or twice, turn the tape on and record it live. We wanted it to have a really immediate feel."

Sheldon, a songwriter and pianist for The Wilders, started playing piano and organ at age 8, but eventually studied as an opera singer at William Jewell College, a small liberal arts college located north of Kansas City, Mo. "I grew up kind of in the sticks of southern Missouri," he says. "A real hillbilly kind of lifestyle. And I did that rebellious teenage thing: I was like, 'I'm gonna go get some culture,' and so I went to school and sang opera. But I came back to these hillbilly roots.

"It's been an interesting trip, and I learned a lot along the way," he adds, "but I kind of ended up where I started."

Sheldon does admit that opera shares many traits with the band's "hillbilly murder ballads." "I think they're both very dramatic, and they both dwell on the sadder sides of life — the pain," he says. "[They] tell a wonderful story that might be a little even overdramatized, but it touches people. They try to speak towards stories that we all know and we all feel and make it real."