Accessibility links
Nuclear Preparedness? Yawn... U.S. scientists meeting to discuss how to respond to a terrorist nuclear attack on American soil say our country is largely unprepared. The first step: getting people to care. 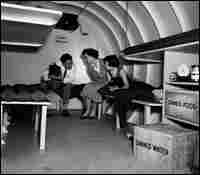 A family huddles in their bomb shelter in 1955. United Press International hide caption

The years of Cold War "duck and cover" drills for school kids are over, but scientists are thinking once again about what to do after a nuclear attack.

The concern is no longer about thousands of Soviet megaton bombs destroying the country. Instead, experts are focused on the possibility of a single relatively primitive bomb set off by terrorists in a U.S. city that could potential kill hundreds of thousands of people.

"There are those who would like to do this to us," Til Jolly of the Department of Homeland Security said to a room full of medical and health experts. They were gathered for a workshop called "Assessing Medical Preparedness for a Nuclear Event" at the National Academies' Institute of Medicine on Thursday.

"Is it likely?" said Jolly. "I don't know if it's likely. I think we owe it to the nation to prepare for a potentially catastrophic event."

Brooke Buddemeier, a radiation safety specialist at Lawrence Livermore National Lab, displayed a map from a computer simulation showing what would happen if a Hiroshima-like bomb went off near the White House. He said that while the surrounding blocks would pretty much get vaporized, people here in the National Academies meeting room a mile away could survive.

"Fortunately when I look at this building it looks pretty solid to me, unless that's all fake," he said, assessing the thick walls. "Hopefully, we have at least 12 inches of wall and maybe 24, which means we're actually doing pretty good."

Buddemeier noted dryly that he would have been killed since he was standing next to a window, exposing him to the initial radiation blast and then broken glass. In fact, windows would break several miles from the bomb.

Participants talked about a sort of grey zone outside the area of total destruction where thousands of people, suffering injuries from fires, collapsing buildings and radiation, would require medical care.

"State and local communities I have been working with, few of them have a coordinated response for the aftermath of nuclear terrorism," Buddemeier said.

Cham Dallas, who runs the Center for Mass Destruction Defense at the University of Georgia, said that he has given hundreds of lectures to health care professionals and experienced planners and that their eyes glaze over when he talks about nuclear attacks.

"I almost feel like you have to use humor... to get through to people," he said.

Hospitals would certainly be overwhelmed. One presenter noted that after the Chernobyl nuclear accident, 10,000 people showed up at a facility, but only 10 nurses were available.

Doctors would need to be trained to quickly assess who could be saved and who could not, said John Mercier, director of the Military Medical Operations Office at the Armed Forces Radiobiology Research Institute. He suggested giving out colored wrist bands.

Doctors will have to have "moral courage," he said. "They're going to have to decide — 'You know what? We don't have the resources for this person or that person' — and move on. That's the hard part."

People farther from the blast would have to watch out for radioactive material carried by the winds. Fallout is initially very radioactive, but it gets less so in a couple days, said Fred Mettler, chief of radiology at the New Mexico VA Health Care System. "Staying inside where it can't drop on you, or if it has dropped on you, changing your clothes and washing may save your life at the end of the day."

Asked what he thought the best response to a bomb would be, Mettler replied, "stop it before it went off." The final slide of his presentation showed an American flag and two words: "Good Luck."