Accessibility links
Britain Weighs Social Cost Of 'Wonder' Drugs Tarceva has been shown to extend life in some lung cancer patients by an average of eight weeks. But Great Britain's government health service has decided not to provide the drug. Cancer patient Donald Sutherland and his doctor, Fergus Macbeth, explain how they live with that decision. 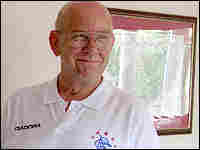 Donald Sutherland was diagnosed with lung cancer 13 years ago. He advocates a practical approach to treatment. Vikki Valentine/NPR hide caption 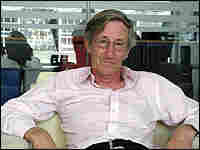 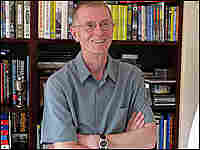 Dr. Fergus Macbeth, in the living room of his patient Donald Sutherland. Macbeth supports the National Health Service's move to consider the cost-effectiveness of treatments before deciding to provide them for free to patients. Vikki Valentine/NPR hide caption

The United States spends on average $6,402 per person annually on medical care. Great Britain spends a little over half that — while providing health coverage for all residents and scoring higher than the U.S. on basic measures of good health, such as life expectancy. Compare the systems.

Upstairs in his spotlessly clean home in Cardiff, Wales, 54-year-old insurance broker Donald Sutherland is in the midst of constructing an elaborate model railroad.

"When it's finished in about 25 years' time, it will represent Central Scotland in the late 1950s, when steam trains were still running," he says.

Such a long-term project was far from Sutherland's mind 13 years ago, when he was diagnosed with a terminal form of lung cancer. A man of few words, he raises his red eyebrows as he tries to describe it.

"It's a real gob-smacking experience when you get told that you've got malignant lung cancer," he says. "When it was diagnosed, they gave me three months to live."

Holding On To Hope

Hope is one of the hardest things to keep alive with that kind of prognosis. Sutherland says he just took things one step at a time, starting treatment immediately at a comprehensive cancer center near his home.

"I had two full courses of chemotherapy," he says. "I had three courses of radiotherapy in my chest and my head, because I had a brain tumor removed, which was a secondary tumor from lung cancer."

Sutherland didn't pay anything out-of-pocket for this treatment. Great Britain provides free medical treatment for all legal residents through the National Health Service, which is funded by income taxes.

For reasons not even his oncologist can explain, Sutherland is still alive after 13 years.

Tarceva won't cure the type of cancer Sutherland has. But it can extend life, by a statistical average of eight weeks, according to one study.

In America's medical culture, there's a strong tendency for doctors and patients to pursue treatments that offer even the slimmest chance of hope. But Sutherland has a different attitude.

"If I was going to die in the near future, and in the meantime bankrupt my wife in order to get money together for treatment, I wouldn't have the treatment," he says.

Not even if that treatment extended his life by a few months, he says.

"Is that any great thing?" he asks.

Americans can get Tarceva, but many have to file a considerable amount of paperwork to get it from private or government insurers. Patients also have the option of applying to the manufacturer to provide it free.

In Britain, the National Health Service doesn't pay for Tarceva, with some rare exceptions. It's one of the tough decisions the National Health Service has had to make. In order to provide coverage for everyone, the NHS has to put limits on medical treatments. By rationing care in this way, the NHS has managed to keep costs down to about $3,800 per person a year — a little over half of the average American's yearly medical bill.

Critics of the NHS say these limits are to blame for the United Kingdom's poor showing in a recent survey of cancer survivorship in 31 countries, published in Lancet Oncology. For the percent of people with breast, prostate or colorectal cancer who lived five years after their diagnosis, the United States ranked as one of the top three countries. England and Wales ranked in the bottom half.

But supporters of the NHS point out that the data were collected in the 1990s. Since then, the NHS has developed a comprehensive breast cancer program. And they point to a cultural difference — Brits tend to wait longer before seeing a doctor. That reduces the chances treatment will be effective.

Donald Sutherland, for one, thinks he's getting top-notch medical care — in large part because he trusts the judgment of his oncologist, Fergus Macbeth.

Macbeth has carefully studied the data on Tarceva and thinks it merits caution.

"From the evidence, it is effective for a few patients, but not for many, and the average benefit in terms of improvement of mean survival is a few months," he says. "And it has significant toxicity."

That toxicity results in diarrhea, vomiting, rashes and the risk of serious liver and lung problems.

Macbeth doesn't think the government is taking away hope by not paying for this or other expensive new high-tech drugs. He agrees that the NHS shouldn't fund a treatment until there's compelling data showing it works. He says desperate attempts to try sometimes toxic new drugs can harm patients, and that's what he sees happening in the United States.

"What I see of the culture of big institutions," Macbeth says, "is what to me seems to be a culture of gross overtreatment of patients, of raising false hopes and putting patients through extreme treatments for very modest gains or very modest probability of gains."

Even without being able to get the newest cancer drugs, Macbeth says he can still give hope to his patients. Cancer can be unpredictable, and patients can unexpectedly do well. Macbeth says he's got other drugs to give, and a physician's role is larger than providing drugs.

The government agency that decides what drugs the NHS will provide is the National Institute for Health and Clinical Excellence (NICE). Sir Michael Rawlins, chairman of NICE, says he knows his agency's rulings can cause much disappointment.

He says he understands that people with lethal illnesses want access to drugs that they think might help them, but he doesn't think his agency is killing patients' hope.

"For people with life-threatening diseases, hope can be very important, and as a physician myself, I understand it," he says. "But the truth is, we can't do it any longer."

Paying huge amounts of money for every new drug with the faintest hope of extending life by even a small amount would make it impossible for the NHS to provide universal care.

And Rawlins is sure that someday Americans will have to deal more directly with these same thorny questions of rationing and hope.

The United States will one day have to take cost effectiveness into account, he says. "There is no doubt about it all. You cannot keep on increasing your health care costs at the rate you are for so poor return. You are 29th in the world in life expectancy. You pay twice as much for health care as anyone else on God's Earth."

And then of course, he points to the millions of Americans with no access to health care because they can't afford it.

"We have in Britain, as in most of Europe actually, a health care system based on social solidarity," he says. "We look after each other when we're sick. And that's very precious to us in Britain. And I think that's what we find so difficult about your health care system; you don't have that."

Cancer patient Sutherland is happy with the British system, even with its limits.

"I think we're quite patient people, albeit if we want something, we'll make sure that we get it," he says. "In my experience, I can only say that whenever I've needed the National Health Service, it's always been there, and I've always had first-class treatment."

Sutherland's big interest is in more funding for the search for an effective treatment for lung cancer. And he doesn't expect his fellow taxpayers to pay for a drug until there's solid proof that there's a benefit.

"You have to be realistic about this," he says. "You know, the demands are infinite, but the resources are finite, and you just have to accept it."

People who can't accept it could just pay out of pocket, he says, something he could do with a bit of a struggle. But he says he would only pay for the drug if his doctor thought it was worth it.