Accessibility links
'King Kong': The Eighth Wonder of the World In 1932, director Merian Cooper approached Fay Wray about playing a lead role in a new movie he was planning — King Kong. But when Cooper first proposed the film in 1931, not everyone thought it was a good idea.

Listen
'King Kong': The Eighth Wonder of the World 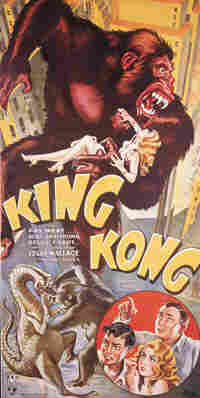 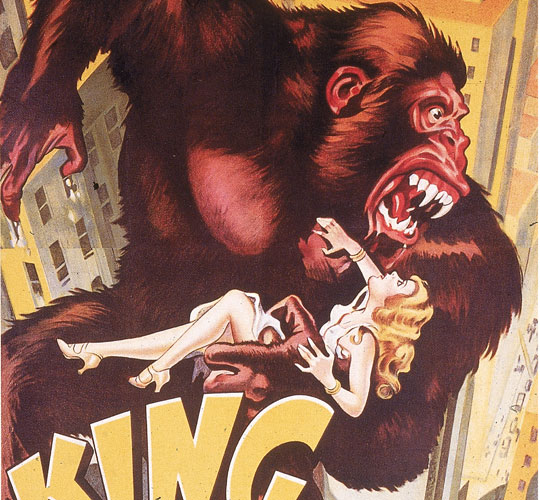 Movie poster for the film King Kong, showing the gorilla holding Fay Wray atop the Empire State Building, as well as wrestling a dinosaur. 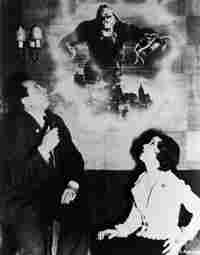 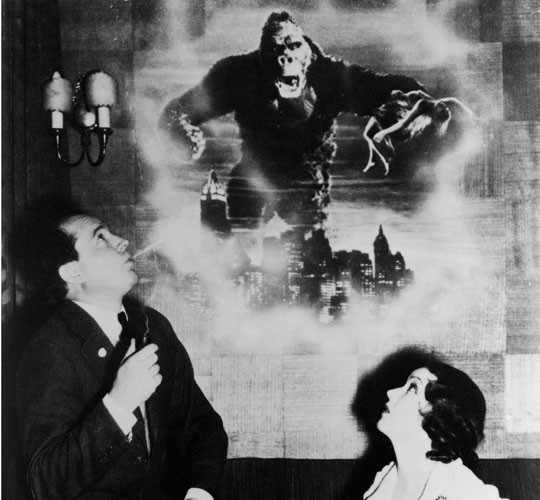 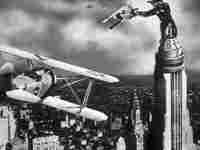 A scene from King Kong, with the giant gorilla astride a Manhattan skyscraper grabbing a passing aeroplane. Hulton Archive/Getty Images hide caption 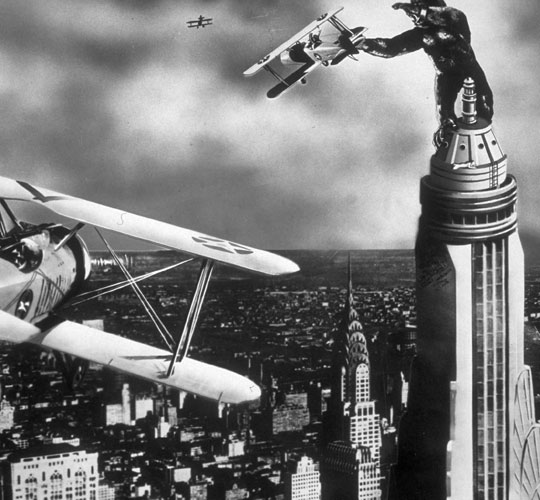 A scene from King Kong, with the giant gorilla astride a Manhattan skyscraper grabbing a passing aeroplane.

In 1932, director Merian Cooper approached Fay Wray about playing a lead role in a new movie he was planning — King Kong. But when Cooper first proposed the film in 1931, not everyone thought it was a good idea. In fact, no one was interested except David O. Selznick at RKO.

"David played one vital part. He was the only human being that backed me up 100 percent," Cooper said. "He didn't know what the hell I was doing. Everyone thought it was nuts. And everybody wanted me to put a man in a gorilla suit. And it would have been just horrible."

But King Kong turned out to be a huge hit in 1933, and it saved RKO from bankruptcy. The reasons for its popularity were numerous: groundbreaking animation by special effects master Willis O'Brien; a majestic, historic score by composer Max Steiner; a solid cast, featuring iconic screamer Wray as Ann Darrow; and a great storyline of high adventure.

In the movie, Carl Denham, the character who leads the expedition to Skull Island, neatly sums up the plot: "Miss Darrow's the story. If it hadn't been for her we couldn't have gotten near Kong. He followed her back to the village ... Beauty and the beast. Kong could have stayed safe where he was, but he couldn't stay away from beauty."

The beauty and beast theme is repeated over and over throughout the film. But it's easy to read other, sometimes darker themes into King Kong. The racial aspect of the original movie is unavoidable.

Cynthia Erb is the director of film studies at Wayne State University in Detroit and the author of Tracking King Kong: A Hollywood Icon in World Culture. Erb says that "most people who know the film would say to one degree or another it is a racist film. At that time in the late 20s early 30s, the jungle genre like Tarzan was very popular in film. So there were a lot of movies set in exotic locations. And the depiction of natives was often patronizing, stereotypical, racist. I think it does happen with the Skull Islanders."

"There is certainly an interpretation of King Kong himself as an extension of the Skull Islanders as a black character that is also racist," she adds. "In my opinion, it always has this other dimension that focuses on King Kong as a victim and on the Carl Denham character as a real intruder, as a certain type who really intrudes and is very clueless about the space he is conquering. So for me that always kind of complicates the argument. There are certainly different ways of reading the film."

And it wasn't just race. Women also come in for their share of disrespect. In the movie, an exchange between Denham and a theater agent highlights this sentiment well.

"Holy mackerel! Do you think I want to haul a woman around?" asks Denham.

"Then why?" the agent responds.

"Because the public, bless 'em, must have a pretty face to look at," Denham says.

As Denham said, they needed a woman for the film, especially for what comes later. King Kong hums with an undercurrent of eroticism. There is bondage imagery and a very famous disrobing scene, where Kong slowly peels away Darrow's dress, then holds it up to his nose and sniffs.

"I've read fans who quote Cooper as saying that moment is supposed to be about peeling petals from a rose," says Erb.

The unasked question in the movie is about ... well ... sex. What exactly does Kong intend to do with his captive girl? It's a question Cooper biographer Mark Cotta Vaz thinks the filmmaker never even contemplated. In an interview with Fresh Air on WHYY, he had this to say: "It's something people will debate. I mean, there is this one book that came out that talked about the whole rape thing... Merian Cooper and Dorothy Jordan were a great couple, and they were worldly people, but they were pretty conservative, and, you know, he was a good Southern gentleman.

"I always have this image of Cooper just cringing, you know, because I honestly don't think that was his intent. I think it was more the idea of beauty being totally vulnerable. He wanted to do a sacrificial ritual thing, and that's — you know, she's put out there to be sacrificed."

To many, the eroticism and racism of the original film are just side themes and part of the fabric of 1930's America. King Kong deals with larger themes as well. Washington Post critic Tom Shales said the movie is a "great 20th century story in which we confront our own primal origins, try to imagine civilizing them, which is, in effect, a kind of corruption of them, and then, tragedy is the result. I don't think beauty killed the beast. I don't think that's at all the moral of the tale, even though that was stated and restated throughout the whole movie. I think it's more of an allegory about modern man, sort of, facing his own nature."

The film historian and critic Richard Schickel said that one of the reasons a work of popular art endures is because it has unanswered questions and people can read things into it. That's certainly true of King Kong. But at its heart, it is a timeless adventure story. Yet the question remains — what was it about the character of Kong himself that drew audiences to him? Erb believes it is the work done by animator O'Brien, who made Kong real, human and larger than life, despite the restrictions of stop-motion animation.

"In reality, it's an 18-inch puppet," says Erb, "and I think that Willis O'Brien was amazingly able to animate it so that he in fact seems to stand several stories high. He was just a genius at animation. And a lot of the things that spell King Kong — his hugeness, his rebellion, his love, his animal quality have to do with O'Brien's obsessive, very careful way of bringing him to life."

O'Brien, Cooper and co-director Ernest B. Schoedsack tried to capitalize on their success by releasing a sequel — Son of Kong — the same year as the original. But they couldn't recreate the magic. Others, most recently Peter Jackson in 2005, have also tried with varying degrees of success. The remakes and a raft of other minor Kong movies over the decades only serve to highlight the power of the 1933 original. For film fans everywhere, Merian Cooper's Kong will always remain the king, the Eighth Wonder of the World.