Accessibility links
Love Blooms Late, But Sweet, For 'Elsa And Fred' In the summer, with school out, teen flicks abound. But occasionally a bit of counterprogramming, like the Spanish film Elsa and Fred, finds its way through. It's a romance — about folks who meet when they're in their 70s.

Listen
Love Blooms Late, But Sweet, For 'Elsa And Fred' 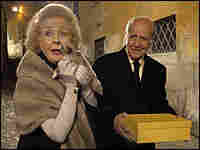 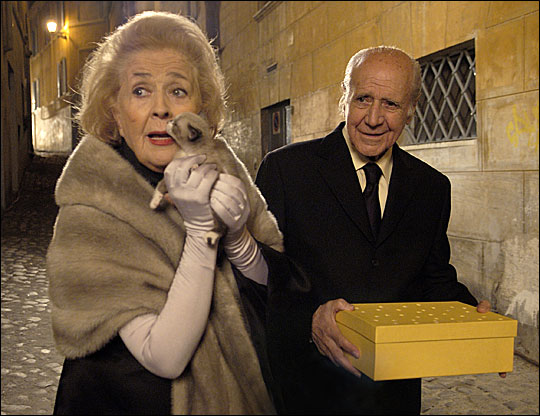 You'd have to call Elsa a live wire. No longer delicate as she approaches 80, she's a vibrant fireplug of a woman, brimming with life, ever on the move, though not necessarily in the direction she intends.

Knocking out a headlight on the car of a new neighbor, Elsa tries to lie her way out of trouble, but gets caught by the neighbor's daughter.

Then she lies to her son about getting caught — and gets caught again.

And when her son gives her a check to pay for the headlight, she concocts a story for that new neighbor — the elderly widower she's supposed to pay — about five imaginary grandchildren who desperately need that money. Only this time she doesn't get caught.

Alfredo, or Fred, who has just moved in, gives her back the check. To thank him, she invites him over for a drink. And he spots a photo on her wall of a beautiful young woman -– actress Anita Ekberg — splashing in Rome's Trevi Fountain in the movie La Dolce Vita.

And so begins a romance that Fred doesn't believe he's quite ready for, in which every date is an adventure. The expensive restaurant, for instance, where he reluctantly eats steak and fluffy pastries for the first time in decades, complaining all the while about cholesterol.

"Nobody dies from eating the most delicious dessert in Madrid," Elsa tells him — and then suggests that on the count of three, they skip out on the check. Protesting under his breath, Fred goes along, and is a little surprised that they get away with it ... though just barely. Life with Elsa is never dull, as Fred discovers to his eventual delight.

China Zorrilla, a Uruguayan actress who didn't even start making movies until she was 50, reportedly did resemble Anita Ekberg when she was younger. So when Elsa tells Fred, played by Manuel Alexandre, about her dream — to someday live that Trevi fountain scene from La Dolce Vita, there's more than just acting going on.

You do sort of have to get past the fact that the character she's playing is forever being dishonest, but by movie's end, director Marcos Carnevale has made it possible for you to see Elsa through Fred's eyes. Love has bloomed late — but with sweet exuberance — in this romantic charmer.

Some broadcast versions of this story gave the wrong name for the 'La Dolce Vita' star China Zorrilla's character claims to have resembled in her youth. That actress was Anita Ekberg, not Virna Lisi.