Accessibility links
Polygamist Raid is PR Nightmare for Mormons The April raid on a polygamist ranch in Texas created image problems for the Mormon Church. A new poll has found that almost a third of those surveyed thought the polygamists were in fact Mormons. Now, Mormon leaders are responding to what they see as widespread confusion about their faith. 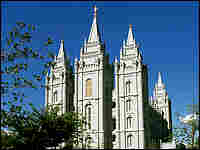 The Salt Lake Mormon Temple appeared in print and television stories about the raid on the FLDS polygamist ranch in Texas. Church of Jesus Christ of Latter-day Saints hide caption 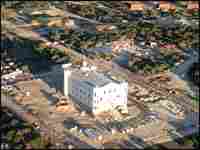 The FLDS polygamist group considers this temple in Eldorado, Texas, a sacred structure. But some news stories about the April raid on FLDS polygamists depicted the Salt Lake Mormon Temple, adding to confusion that inaccurately linked FLDS polygamists with Mormons. The Eldorado Success hide caption

Mormons want the world to know this: They're not polygamists. And the FLDS polygamists in Texas are not Mormons.

A recent poll commissioned by the Church of Jesus Christ of Latter-day Saints — that's the Mormon Church — found that 91 percent of those surveyed had heard about the April raid on the Texas ranch owned by the polygamist group known as the Fundamentalist Church of Jesus Christ of Latter Day Saints, or FLDS. Thirty percent of respondents believed the FLDS were Mormons, and 36 percent said the "religious compound in Texas" is associated with the Mormon faith.

This frustrates Mormon leaders, who have been trying to distance the modern practice of their faith from its polygamist roots. They note that a Mormon prophet officially dispensed with polygamy in 1890.

"Mormons have nothing whatsoever to do with this polygamous sect in Texas," says Quentin Cook, an "apostle" in the Mormon Church's top, 15-man leadership. "[Polygamy] is a significant part of our distant past, not of our present."

A new Mormon public relations campaign emphasizes the distinctions between Mormons and FLDS polygamists and underscores the fact that polygamy is not tolerated among Mormons today — it triggers excommunication.

"We're certainly aware that there is some confusion out there," says Mike Otterson, spokesman for Mormon leaders. "But when that comes back as three out of every four people either not knowing that there is a difference [between Mormons and FLDS polygamists] or actually thinking that there is a connection, that's sobering."

Seven videos have been posted on YouTube and the official Mormon Web site. The videos feature average Mormons among the church's 260,000 members in Texas, including a community theater director, an orthopedic surgeon, a television sportscaster and a young woman aiming for medical school.

None have multiple wives, child brides or the 19th century clothing and hairstyles that are associated with FLDS polygamists.

"Probably the best way to counter that [FLDS image] is to show who Mormons really are," Otterson says.

There's also an effort to get reporters to be clearer about the distinctions in news stories. A Mormon church lawyer sent a letter to more than 80 news organizations, noting that "Mormon" and "Church of Jesus Christ of Latter-day Saints" are registered trademarks.

The letter discourages the use of the phrase "fundamentalist Mormon," which is what the FLDS and other polygamists call themselves. And it suggests that phrases such as "breakaway Mormon sect" and "renegade Mormon sect" are misleading. The phrases have appeared in more than 10,000 news stories, a Google search showed.

Kelly McBride agrees that news organizations need to be more careful about using the term "Mormon" in stories about the FLDS polygamists. McBride is a former religion reporter who covered the Mormon faith and is now a media ethicist at the Poynter Institute in Florida.

"The Mormon Church, in general, means the church that is headquartered in Salt Lake City and founded by Joseph Smith," McBride notes. "So to use that word to describe a group that is not affiliated with the main Mormon Church naturally confused people."

The names of the two faiths alone lead to confusion. Mormons are formally known as the Church of Jesus Christ of Latter-day Saints. The group now known as the FLDS formally adopted the name the Fundamentalist Church of Jesus Christ of Latter Day Saints in 1991. Mormons use the initials LDS. The polygamist group raided in Texas uses the initials FLDS.

Confusion may also stem from the fact that Mormons and FLDS polygamists share what historian Jan Shipps describes as a common religious tradition. Shipps is not Mormon, but she has spent 50 years studying Mormon history at Indiana University-Purdue University in Indianapolis.

Mormons and FLDS followers both "believe in Joseph Smith as the [founding] prophet," Shipps says. "They [both] accept the Book of Mormon. They share that much. And they even share a period of practicing plural marriage. That leads to the real confusion."

The Mormon abandonment of polygamy is also not as clean as Mormon leaders suggest. An 1890 "manifesto" did officially dispense with polygamy as a Mormon practice. But at least two of the highest-ranking Mormon leaders had multiple wives until 1904, according to Shipps, other historians and the congressional testimony of one of those leaders. Shipps also found historical documents showing that the practice was persistent among rank-and-file Mormons until 1919.

Polygamy also survives in Mormon theology, in the Mormon concept of the afterlife, according to Richard Bushman, a Mormon and visiting professor in Mormon studies at Claremont Graduate University in California.

"A man can be sealed [in eternal marriage] to two women if one of them dies and he marries again," Bushman explains. "There's sort of an implicit heavenly plural marriage that is still authorized and acknowledged. So at the very best we're caught in kind of an ambiguous situation, and people probably pick that up."

The new Mormon public relations effort does not address these ambiguities. But they're irrelevant because there's no polygamy in modern and earthly Mormon life, says Otterson, the Mormon spokesman.

"There is absolutely no connection between these polygamous groups and the Church of Jesus Christ of Latter-day Saints," Otterson says. "We are not the same. We don't embrace the same belief system. We don't act the way they act. We certainly don't live in compounds."

Texas Town Wary of Polygamist Sect's Arrival May 4, 2005
Polygamists on Utah-Arizona Border Under Scrutiny May 3, 2005
Warren Jeffs and the FLDS May 3, 2005